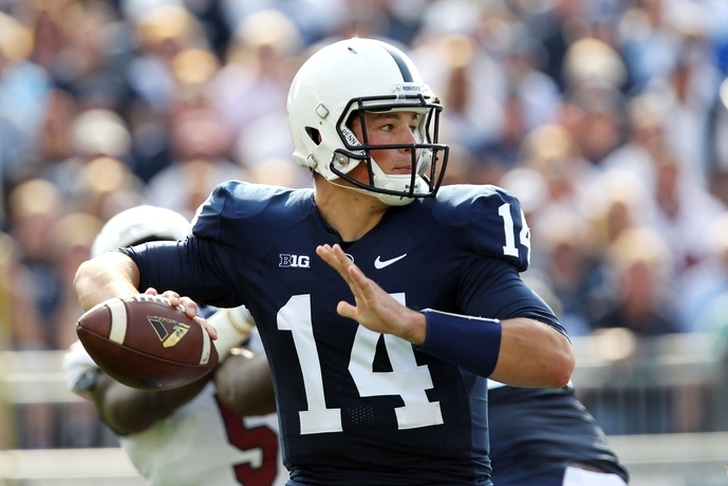 There might not be a more divisive prospect in the NFL Draft this season than Penn State Nittany Lions QB Christian Hackenberg. He showed great promise in his first season at Penn State, but struggled the next two seasons behind a terrible offensive line. Hackenberg has everything scouts look for in a franchise QB, as Hackenberg is prototypical pocket passer.

But there are questions about Hackenberg's accuracy and he struggled in those last two years. Hackenberg likely won't be a first round pick, but he could go as early as Day 2 and will likely be off the board at some point on Day 3. NFL teams are always searching for a franchise QB, and there are at least a few that think Hackenberg can be that player. With that in mind, here are the three teams most likely to select Christian Hackenberg in the 2016 NFL Draft.

3. Los Angeles Rams
The Rams traded Sam Bradford for Nick Foles and a second round pick, with the hope that Foles would provided stability at the QB spot. That wasn't the case, as Foles was just awful this season. The team eventually turned to Case Keenum, who was much better as the starter. But it's tough to envision Keenum as the starter and the Rams could be looking for another QB in the draft this year. Hackenberg wouldn't need to start, as Keenum could hold down the fort until Hackenberg is ready. The Rams run-first offense could be a good fit for Hackenberg.

2. Arizona Cardinals
The Cardinals took a shot on Logan Thomas a few seasons ago, but that didn't work out. That means the team still needs a QB to groom behind Carson Palmer. Hackenberg fits that bill and Arizona would be a great spot for Hackenberg. He'd get to learn from Palmer and QB guru Bruce Arians. For more on Hackenberg, download the Chat Sports Android and iPhone app.

1. Houston Texans
It's not like this is a surprise. The Texans are without a doubt the most likely landing spot for Hackenberg this offseason. Hackenberg's best season at Penn State came when Texans head coach Bill O'Brien was at PSU. The Texans badly need a QB and are likely to take one this offseason. Houston could address other needs in the first few rounds and then take Hackenberg, a player O'Brien is already familiar with. It almost makes too much sense.