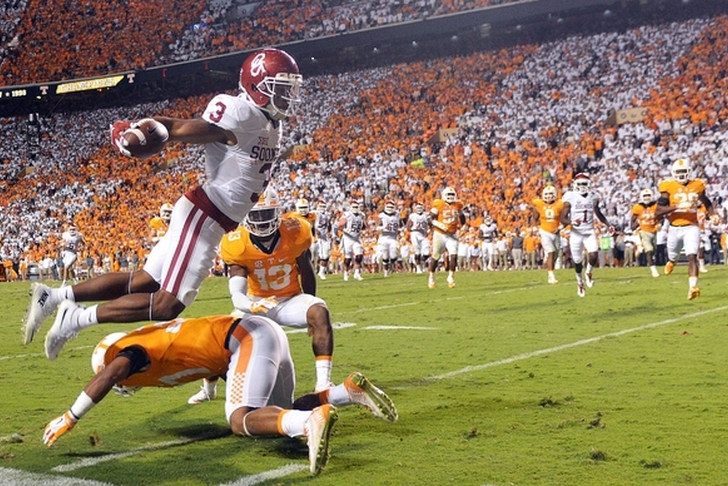 In a deep NFL Draft class for wide receivers, Oklahoma Sooners WR Sterling Shepard is getting overlook to an extent. He was highly productive at Oklahoma, but is undersized at 5-foot-10, 194-pounds. Shepard could play outside in the NFL, but he's likely best as a slot WR.

Shepard is among the second-tier of WRs and is highly unlikely to be a first round pick. However, he should be a Day 2 pick and will likely go during Round Two. Shepard has talent and he profiles as a productive WR in the NFL. While several teams will have interest in Shepard, we've narrowed the options down to just a few. With that in mind, here are three teams could select Sterling Shepard in the 2016 NFL Draft.

Atlanta Falcons
The Falcons have Julio Jones and ... Justin Hardy? Hardy might be a slot WR option, but it's tough to trust him as an option. The Falcons could still use a WR and Shepard could help compliment Jones. The Falcons cut Roddy White and they'll need to find at least one WR this offseason, with two being a more likely outcome. If it's not Shepard, it will be someone else.

Carolina Panthers
Getting Kelvin Benjamin back will be a big boost on the outside, the Panthers still need WR help. They've already interview Shepard at the NFL Combine and like his big-play ability. Shepard would be a massive upgrade over Jerricho Cotchery in the slot and he'd be a valuable weapon for Cam Newton. Plus, he shouldn't drop as many passes and many of the current Panthers' WR do.

Houston Texans
The Texans have DeAndre Hopkins and that's it at WR. Jaelen Strong could develop, but he didn't do himself any favors with his arrest for marijuana. Shepard could serve as the slot WR the team badly needs, as Cecil Short isn't the long-term or short-term answer give his struggles last year. The Texans could spend their second round pick on a different spot, but it's the right range and fit for Shepard.