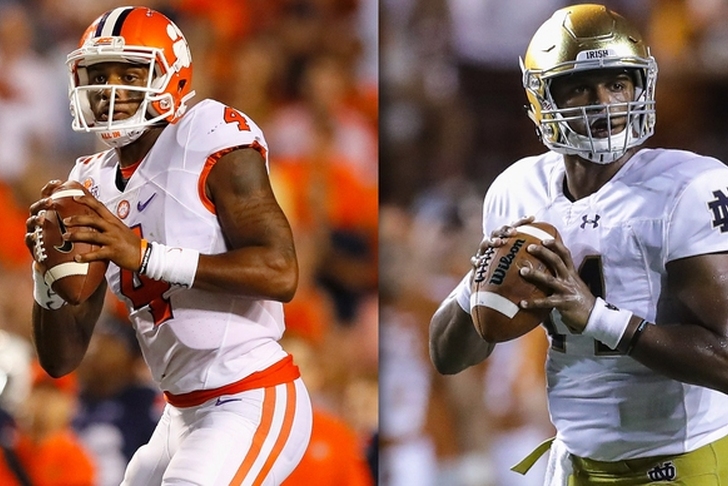 The 2017 NFL Draft is still many months away, but with several teams already out of the playoff hunt at the midway point of the season, they have turned their attention to adding a few impact players - especially in the first round. This draft is especially strong at running back, defensive end and in the secondary, and many teams are hoping they will find future stars in the first round.

This draft order is adjusted due to the current records and playoff seeding of all 32 teams in the league. Without further ado, here the first round of our mock 2017 NFL Draft:

1. Cleveland Browns: Jonathan Allen, DT/DE, Alabama
Cleveland could very easily go quarterback here, and may very well do so. However, they really like what they have in Cody Kessler, and Deshaun Watson - who was projected to be the top quarterback taken - hasn't played great and has had problems turning the ball over this year. They're in a long rebuilding process and have a whole roster to revamp. If they aren't happy with a quarterback in this class, they'll try to develop Kessler for another year and draft the best defensive player available in the versatile Allen.

2. San Francisco 49ers: DeShone Kizer, QB, Notre Dame
The 49ers are desperate for a quarterback, and Kizer has emerged as the top quarterback prospect due to his size, arm talent and mobility. He is still inconsistent and has struggled at times this season, but that has a lot to do with Notre Dame's lackluster offensive line and poor playcalling. Kizer isn't the perfect prospect, but for a team that needs a QB, they'll take him.

3. Chicago Bears: Deshaun Watson, QB, Clemson
The Bears are reportedly "done" with Cutler after the season, and they'd be ecstatic if Watson was the guy they got to replace. He has an extremely accurate arm and is an excellent runner. However, he has made some poor decisions with the football this year, leading to a good deal of turnovers.

4. Jacksonville Jaguars: Myles Garrett, DE, Texas A&M
Jacksonville can't rush the passer. Enter Garrett, who is arguably the best overall prospect in this class and can contribute from day one.

5. Carolina Panthers: Marlon Humphrey, CB, Alabama
Is this high for Humphrey? Probably. But he's the best cornerback in this class, and Carolina's secondary has been dreadful this year after choosing not to re-sign Josh Norman. They'll try to make up for that in the first round.

6. New York Jets: Leonard Fournette, RB, LSU
Matt Forte can't play forever. Enter Fournette, who is the complete package of size, speed, strength and agility. New York would be elated if he fell this far. Don't be surprised if a team opts for him over a defensive player in the top 5.

7. Indianapolis Colts: Jabrill Peppers, S/CB, Michigan
The Colts are a complete mess defensively, and general manager Ryan Grigson has blamed Andrew Luck's contract on their inability to build a solid unit. Whether that's true or not, they know they need to draft a defensive player in the first round, and Peppers is the best and most dynamic player available at this point.

8. San Diego Chargers: Malik Hooker, S, Ohio State
San Diego is good at cornerback, but need safety help to fill the void left by Eric Weddle. Hooker is considered to be the top safety available, making this an easy choice for San Diego.

9. Miami Dolphins: Teez Tabor, CB, Florida
The Dolphins desperately need an upgrade at cornerback, and Tabor is one of the best available. He appears to be the total package of size, physicality, speed and playmaking ability.

10. Tennessee Titans (via Los Angeles Rams): Marshon Lattimore, CB, Ohio State
Tennessee would love if Tabor was still available at their pick, but if not, they'll go with the second-best cornerback on the board. They could also go with a safety, but Lattimore's pure coverage skills make him hard to pass on.

11. Baltimore Ravens: Derek Barnett, DE, Tennessee
The pass rush is severely lacking in Baltimore, and Barnett would fix that in a hurry. He has routinely beaten double teams in the SEC and should have immediate success in the NFL.

12. Tampa Bay Buccaneers: Jamal Adams, S, LSU
Tampa Bay's secondary is one of the worst in the NFL, particularly at the safety position. Enter Adams, who simply makes play after play at LSU.

13. New Orleans Saints: Malik McDowell, DE/DT, Michigan State
Just pencil in the top defensive player on the board for the Saints in the draft, as they have needs at basically every spot but safety. They took Sheldon Rankins in the first last year, but he and Cam Jordan are the only long-term locks at DL for the Saints. McDowell has the kind of versatility that allows him to play anywhere, which is needed in New Orleans.

14. Arizona Cardinals: Mitch Trubisky, QB, North Carolina
Trubisky is going to be that quarterback who goes in the first round just because he's a quarterback, but Arizona would be the perfect spot for him. It's clear that Carson Palmer is starting to decline, and they need a long-term answer. Trubisky has the arm talent to be that guy, and will also have time to develop.

15. Cincinnati Bengals: Gareon Conley, CB, Ohio State
Considering the struggles of Cincinnati's secondary and that 2014 first-round pick Darqueze Dennard has started just two games in his career, they need to go with a cornerback. Conley is another guy with pure cover skills and immense upside.

16.  Buffalo Bills: Mike Williams, WR, Clemson
The Bills need a No. 2 to pair with Sammy Watkins, so why not go with another great Clemson receiver? Williams missed all of last season with a neck injury, but has routinely shown the deadly combination of size and speed that has some calling him the next Sammy Watkins.

17. Tennessee Titans: Adoree' Jackson, CB, USC
Jackson is crazy fast. He's a gifted athlete that plays some WR for USC. His NFL future is at CB, something the Titans really need. He has fallen a bit from his preseason top 10 projection, but teams will fall in love with his athletic ability.

18. Detroit Lions: Desmond King, CB, Iowa
Another CB, a position the Lions have ignored for too long. Darius Slay has played well, but he's a free agent and the team could use another starter anyway.

19. Washington Redskins: Dalvin Cook, RB, Florida State
By now, it's clear that neither Matt Jones or Chris Thompson is a No. 1 running back. Enter Cook, who has been carrying Florida State's offense each of the last two years. On talent alone, Cook could be a top five pick, but because he's a running back, he should still be available.

20. Pittsburgh Steelers: Takkarist McKinley, OLB/DE, UCLA
Though we may have evidence to the contrary, James Harrison isn't going to play forever. McKinley is a good pass rusher with upside that is perfect in the 3-4.

21. New York Giants: Charles Harris, DE/OLB, Missouri
Every year, we talk about how the Giants need LB help. And every year, they neglect the spot early in the draft. Maybe this will be the year it finally changes. Harris can help with that while also continuing to improve New York's pass rush.

22. Green Bay Packers: Quinton Nelson, OG, Notre Dame
Green Bay's offensive struggles have been mostly blamed on their offensive line. So, sure that up by drafting the best guard available.

23. Cleveland Browns (via Philadelphia Eagles): Cam Robinson, OT, Alabama
The Browns may gamble on a quarterback at this spot if Trubisky is available, but if they go with the best player available, Robinson is their guy. He was a projected top five pick before the season, but has been inconsistent. However, he has all the tools and all the ability in the world. Robinson would also take over the left tackle position from Joe Thomas at some point in the future.

24. Atlanta Falcons: Tim Williams, DE, Alabama
Here's some passing rushing help for Atlanta. Williams could easily be a Top 10 selection if not for some off-field issues, making this a steal for the Falcons.

25.  Houston Texans: Marcus Maye, S, Florida
Houston's front seven is good, and they have a group of good skill players on offense. They really need to upgrade their secondary, particularly at the back end, and Maye if someone who can play from day one.

26. Seattle Seahawks: Dan Feeney, OG, Indiana
Seattle's offensive line is a mess, but they've neglected it for the past several years. They may very well to choose to neglect it again, but it's something they can't ignore much longer.

27.  Kansas City Chiefs: Jourdan Lewis, CB, Michigan
The Chiefs have one lockdown corner in Marcus Peters. Adding another, with their explosive pass rush, will make their defense one of the best two or three units in the entire league.

28. Oakland Raiders: Reuben Foster, LB, Alabama
Oakland can look to either the secondary or to the linebacking score, and with Foster still on the board, that'll be the way they go. Foster can be the Raiders' middle linebacker for the next decade and will make an immediate impact stopping the run.

29.  Denver Broncos: Jarrad Davis, LB, Florida
The Broncos lost Danny Trevathan last offseason and have missed him this season. They neglected the ILB spot last year and should target one early.

30. Philadelphia Eagles (via Minnesota Vikings): Malachi Dupre, WR, LSU
Dupre has plenty of talent, but doesn't get much of a chance to show it because LSU can't throw the ball (see Odell Beckham and Jarvis Landry). However, he is as explosive as anyone in this class and possesses amazing ball skills. Philadelphia needs a receiver, and Dupre is the only with the most upside.

31. Dallas Cowboys: Zach Cunningham, LB, Vanderbilt
Dallas' defense has been much better than expected this season, but they still need help at linebacker. Cunningham is a reliable option who is great at stopping the run.

32. New England Patriots: Christian McCaffrey, RB, Stanford
McCaffrey's game won't translate as well to the NFL as it does in college. Of course, he's one of the best backs in college and is going to be a very good pro. The Patriots taking McCaffrey just seems like an inevitable outcome (and one that will fit very, very well).