Eric Decker: 5 NFL Teams That Could Sign The Veteran WR In Free Agency 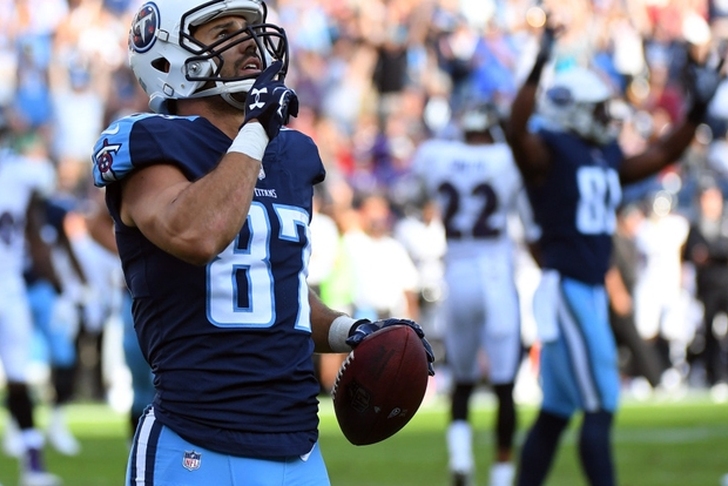 The NFL rumors surrounding where wide receiver Eric Decker will play in 2018 are starting to pick up. The demand for Decker seems relatively low, but that may change soon. Decker was released by the Tennessee Titans and is now looking to take his talents to another team. So, which teams could sign Decker now that he's one of the top free agent wide receivers still unsigned?  He's only two years removed from a great year with the New York Jets where he had 80 receptions, 1,027 yards, and 12 touchdowns. The 31-year-old might not demand a massive contract, but he should still draw interest. Here are five teams that could sign Decker this offseason:

5.) Washington Redskins
Entering the 2017 season the Redskins had one of the most feared receiving corps in the entire NFL with pass catchers like wide receiver Terrelle Pryor and tight end Jordan Reed. Both players battled injuries for most of the season and when they were healthy, they didn't produce as expected. Former first-round pick in the 2016 NFL Draft wide receiver Josh Doctson has shown some glimpses of talent in the red zone but still has been inconsistent. Washington needs to add some reliable targets for their new quarterback Alex Smith.

4.) Carolina Panthers
Carolina needs to find a starting-caliber wide receiver to replace Kelvin Benjamin and give Cam Newton another weapon to help take his offense to another level. They already have Devin Funchess locked into one starting spot and now deep threat Torrey Smith, but would like to add a reliable wideout to the group. However, given the depth at the position in this draft class, that may be something they opt to find on Day 2 and pass on Decker.

3. ) Seattle Seahawks
The Seahawks had a visit on Monday with top free agent wide receiver Terrelle Pryor and with him signing with the Jets, they may turn their attention to Decker. Seattle lost wide receiver Paul Richardson and tight end Jimmy Graham to free agency and will need to add potential targets around quarterback Russell Wilson.  The Seahawks struggled in the red zone a season ago and adding Decker would improve their offense inside their opponents 20-yard line.

2.) Oakland Raiders
The Raiders already made a splash in the free agency signing former Packers wide receiver Jordy Nelson after Oakland decided to cut wide receiver Michael Crabtree. Decker visited with the Raiders on Tuesday but left Oakland without a deal. The Raiders receivers struggled with drops last season so finding a sure-handed receiver like Decker would help the growth of quarterback Derek Carr. Anytime tight end Jared Cook leads the team in receiving yards with 688, that means you need to make some changes to the receiving corps.

1.) Denver Broncos
The Broncos are in the market for a third wide receiver to complement Demaryius Thomas and Emmanuel Sanders. Decker was drafted by the Broncos in the third round of the 2010 NFL Draft. He spent his first four seasons in Denver racking up 222 receptions, 3,070 yards, and 33 touchdowns. Giving new quarterback Case Keenum three solid receiving options will only help the Broncos move the ball down the field.