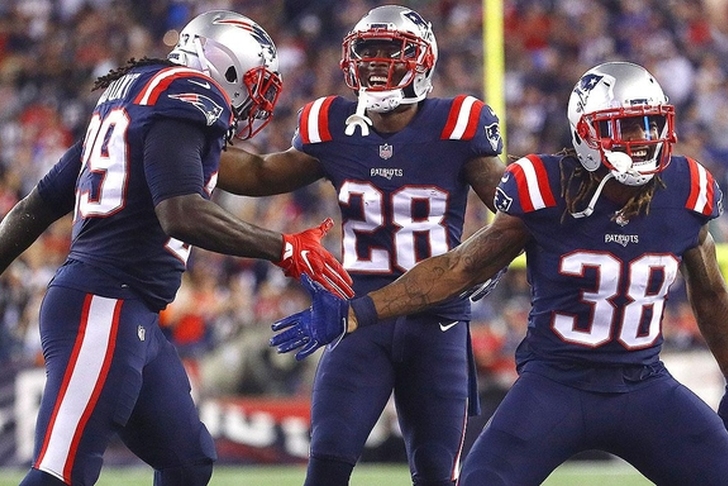 The first three weeks of the 2016 NFL season are now complete, and the true playoff contenders are starting to emerge. It's still too early to declare any team the Super Bowl favorite or count any out. But we can start trying to forecast which teams will make the forecast.

This list should change a bit each week, especially early in the year. While it's not quite the same as power rankings, it should look somewhat similar. This accounts for team's schedules as well as their divisions, so it's not based solely on record. So, here are my projections for the NFL Playoffs after three weeks.

1. New England Patriots (3-0)
The Patriots beat the Houston Texans, a playoff team from last year that was 2-0, with their third string QB. And the Texans could barely get past midfield in that one. Whether it's Jimmy Garoppolo or Jacoby Brissett at QB in Week 4 against the Bills, Bill Belichick has proven he can win damn near anyone at QB. Oh by the way, Tom Brady returns in Week 5. The Patriots are the team to beat in the AFC and possibly the NFL.

2. Denver Broncos (3-0)
The Broncos are once again going to win on the strength of their defense. QB Trevor Siemian looked really good in Week 3, although I think he'll have a tough time duplicating that effort. Still, the defending Super Bowl champs look like they'll back in the playoffs once again this year.

3. Pittsburgh Steelers (2-1)
That loss to the Eagles stings and was a surprise, but this is still a very good team. They've already beaten the Bengals once, something that helps their divisional chances. Games against the Chiefs and Jets the next two weeks will be critical for all teams involved.

4. Houston Texans (2-1)
That loss to the Patriots was bad, but Houston is still atop the division in the AFC South. The defense is really good, although the offense still has some work to do. Brock Osweiler has to be better than he was on Thursday night. The AFC South is still a mess, with all four teams posting a negative point differential. I still think it comes down to the Texans and the Colts.

5. Baltimore Ravens (3-0)
It hasn't always been pretty, but the Ravens are 3-0 and atop the AFC North. I think the Steelers are still a better team, but Baltimore will push for a playoff spot. A game against the Raiders this week has major playoff implications, since both will push for a spot. If Baltimore wins that game, a 6-0 start to the season isn't out of the question.

6. Cincinnati Bengals (1-2)
The Bengals have lost a pair of tough games to the Steelers and Broncos, although self-inflicted wounds played a major role in those losses. But those are two of the hardest games the Bengals have all season. The schedule gets easier and the Bengals will start winning very soon. However, there will be a tough battle for the wild card spots in the AFC. There's the Jets and maybe even the Bills and Dolphins, plus the entire AFC West. The Raiders, Chiefs and Chargers all have positive point differentials and will fight for a playoff berth.

1. Minnesota Vikings (3-0)
This Vikings defense is absurdly good. The offense isn't doing all that great, but defense wins championships. And the Vikings have a championship defense. They've already beaten two likely playoff teams in the Panthers and Packers. Minnesota looks great so far and while they could regress at some point, they're in the pole position for the No. 1 overall seed.

2. Carolina Panthers (1-2)
The Panthers might have two losses, but neither of those teams have lost this season. So they're getting a bit of a break, especially since they still have a positive point differential. The Panthers have an easier schedule than a team like Arizona, and they'll bounce back. They play three NFC South teams in a row starting this week, all games they should (and need) to win.

3. Arizona Cardinals (1-2)
The Cardinals should have beaten the Patriots in Week 1, until a missed field goal ruined it. I still like this team, even after a terrible offensive showing against the Bills. I think they bounce back in a needed way and enter a key home game against the Seahawks playing more like they did in Week 2.

4. Philadelphia Eagles (3-0)
No team has surprised me quite like the Eagles have, and I mean that in a good way. I didn't see them starting the 3-0 and I certainly didn't think they'd take it to Pittsburgh like they did. I'm not sure how good this team actually is and I do think the Dallas Cowboys will make a run at this division, but the Eagles could very well start the season 5-0.

5. Green Bay Packers (2-1)
Losing to Minnesota never sits well with Green Bay, but they are still 2-1. They are a clear playoff threat, especially if the offense can build on last week's effort. There's still room for improvement, but the Packers should at least be a wild card team.

6. Seattle Seahawks (1-2)
If the Seattle offense plays like they did in Week 3, this will be too low. If the Week 1 and 2 units keep showing up, they won't make the playoffs. Seattle is loaded on defense, but that offensive line has already resulted in two Russell Wilson injuries. At some point, he won't be able to get back up. Seattle is talented, but the Falcons and maybe even one of those NFC East teams could snag this spot.