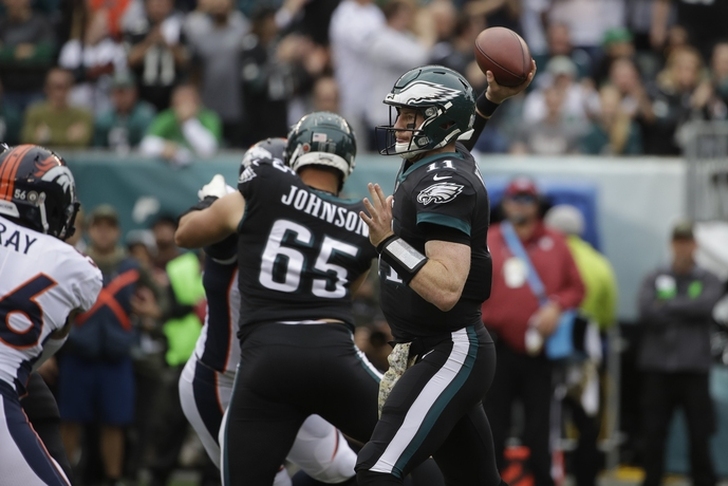 The first nine weeks of the 2017 NFL season are now complete and it's time to project what the NFL Playoffs will look like this year. It's still too early to declare any team a playoff lock, but we do know which teams are in the best position. Plenty can, and will change, but we have an idea of which teams will be in the postseason mix and which teams aren't playoff-bound this season.

This list should change a bit each week and while it's not quite the same as power rankings, it should look somewhat similar. This accounts for team's schedules as well as their divisions, so it's not based solely on record. So, here are my projections for the NFL Playoffs after nine weeks.

1. New England Patriots (6-2)
Tom Brady, despite being 40 years old, continues to play some of the best football of his career. However, there are worries for this Patriots team. The team has been hit hard with injuries and the defense is among the worst in the NFL. But Bill Belichick and the Patriots keep winning games. It'll be a hard-fought battle for the No. 1 and No. 2 seeds.

2. Pittsburgh Steelers (6-2)
The Steelers have been a bit inconsistent this year, all while dealing with an unhappy Martavis Bryant and some odd comments from Ben Roethlisberger. They've rattled off three solid wins and a home game against the Packers no longer looks that bad. The top of the AFC will likely be decided on Dec. 17th, when the Patriots visit the Steelers.

3. Kansas City Chiefs (6-3)
The Chiefs hit a rough patch recently, but with the Broncos and Raiders underachieving, they remain the favorites in the AFC West. The offense, led by Tyreek Hill, Travis Kelce, Kareem Hunt and Alex Smith, has carried the team. Believe it or not, the defense has serious problems without Eric Berry in the secondary. At the start of the year, Oakland would have been my choice for the AFC West winner, but now, they're only fighting for a Wild Card spot.

4. Jacksonville Jaguars (5-3)
Sacksonville only got more deadly for opposing QBs with the arrival of Marcell Dareus. Blake Bortles has had to do very little heavy lifting, which is exactly what the Jags want. I'm not confident about the AFC South at all, with the Titans very much in the mix. The Jags get the nod because of their slightly easier schedule, which features games against the Colts, Cardinals, Browns and 49ers still.

5. Tennessee Titans (5-3)
The Titans are a bad loss to the Dolphins (without Marcus Mariota) from being 6-2 and everyone loving them. But that loss could cost them the AFC South title, although a Week 17 matchup against the Jags might render that point moot. There are five games the rest of the way the Titans should win, enough to get them in the playoffs. The win over the Ravens this week was critical and I'll be surprised if the Titans don't at least make the playoffs. The difference between the Jags and Titans right now is minuscule.

6. Buffalo Bills (5-3)
As everyone saw coming, a Bills team that traded away a bunch of key pieces was 5-2 before losing to the Jets on Thursday Night Football. Buffalo's loss is incredibly disappointing and it's a blow to their playoff chances. They're still in solid shape, but the Raiders (4-5), Chargers (3-5), Broncos (3-5), Ravens (4-5) and even the Jets (4-5) are in the mix as well. I believe the Dolphins (4-4) are total frauds and their bottom-3 AFC point differential is indicative of that. Both AFC Wild Card spots won't be determined until Week 16 or even 17. I'd love to put the Raiders here, because I believe they're a good team, but their schedule does them zero favors.

1. Philadelphia Eagles (8-1)
This Eagles team is legit. Carson Wentz has weapons around him and he's taken a great step forward. The defensive front seven has played great and the team with the best record in the NFL has earned this spot. However, there is some room for concern. The Eagles lost OT Jason Peters and LB Jordan Hicks, two massive blows. A string of three straight road games in December will be rough as well.

2. Minnesota Vikings (6-2)
This Vikings defense is one of the best in the NFL and with Aaron Rodgers hurt, they've got a clear path to playoffs. The Lions are several games back and I'll be surprised if the Vikings collapse like they did last year. Of course, that assumes they don't get hit by the same injury bug that killed them last year. Case Keenum hasn't sucked, but I'm not sure he's the guy to lead the Vikings to the Super Bowl. Maybe, just maybe, it's Teddy Bridgewater.

3. New Orleans Saints (6-2)
The Saints offense has always been deadly. But the defense is what always turned them from a double-digit win team into a 7-win squad in recent years. But that's not the case this year, as the defense has taken a huge step forward. I'm all aboard the Drew Brees MVP train (he deserves one in his NFL career) and I like the Saints to win the NFC South and push hard for a bye. The Panthers are biggest and maybe only threat to the Saints.

4. Seattle Seahawks (5-3)
A loss at home to the Redskins is a massive blow for a Seahawks team that has a pretty tricky schedule the rest of the season. The offensive line is still not fixed, although it should be better once Duane Brown gets fully acclimated. Seattle is a good team (and they play better later in the year), but they could end up as a wild card. I still think they beat the Rams at home in December, which gives them the nod in the NFC West.

5. Los Angeles Rams (6-2)
I'm not really sure I'm ready to buy this Rams team. The Cowboys win was great (and huge for a potential tiebreaker), but the Rams could come back down to earth and finish with 10 or so wins. The schedule isn't that easy the rest of the way, so don't be surprised if the Rams drop a few more games. Still, with five wins already, the Rams are in a really good spot. A win over the Cowboys earlier this year might end up being the tiebreaker for a Wild Card seed. The rams are very much in the mix in the NFC West.

6. Dallas Cowboys (5-3)
I love the NFC, because there are numerous teams that could take this spot. The Lions are better than their 4-4 record, the Redskins just upset the Seahawks and they'll remain in the mix all year. The Panthers are above the Falcons in the race for a playoff spot and they're a legitimate threat. But, if Ezekiel Elliott is active and not suspended, the Cowboys are the team to beat for this spot. They're coming off a huge win over the Chiefs and can get another key one if they beat the Falcons this week. Carolina is the seventh team for me at the moment, but a Cowboys loss this week would result in the Panthers jumping them. The NFC Wild Card race is going to be incredible.