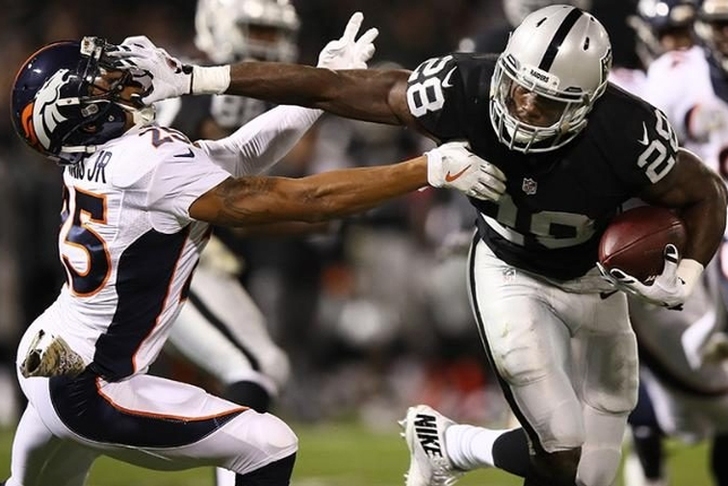 The first nine weeks of the 2016 NFL season are now complete and the playoff contenders are beginning to emerge. It's still too early to declare any team the Super Bowl favorite, but we know which teams (should) be contenders and pretenders. Of course, that can all change with nearly half the season to go, but there is a large enough sample size.

This list should change a bit each week and while it's not quite the same as power rankings, it should look somewhat similar. This accounts for team's schedules as well as their divisions, so it's not based solely on record. So, here are my projections for the NFL Playoffs after nine weeks.

1. New England Patriots (7-1)
Tom Brady is back and he's playing some of the best ball of his career. Over 70 percent completions with 12 TDs and no picks? That's just absurd and he's the MVP favorite right now. The Patriots are the team to beat in the AFC and likely the NFL.

2. Oakland Raiders (7-2)
Congrats, Oakland. You're now the favorite in the AFC West, and thus, the No. 2 seed. The offense has been wonderful this year, and the defense is showing improvement. However, the schedule gets harder the rest of the way. Derek Carr wasn't as sharp in the second half of last season as he was in the first. Will that be the case again this year?

3. Pittsburgh Steelers (4-4)
The AFC North is suddenly very competitive. The Ravens' win over Pittsburgh helped Baltimore in a big way and it also helped the Bengals. With Cincinnati at 3-4-1 and now the Ravens at 4-4, this division won't be decided in the near future. But the next few weeks will be critical for determining in the favorite. I'm not counting any team out (except for Cleveland), but I'll go with the Steelers for now.

4. Houston Texans (5-3)
Houston is still atop the division in the AFC South thanks to a comeback win over the Colts. The defense is good, although the offense still has some work to do. Brock Osweiler has to keep getting better, or the Texans won't make any noise in the playoffs. The AFC South is still a mess, with all four teams posting a negative point differential. I still think it comes down to the Texans and the Colts (sorry, Titans) and that win over Colts earlier this year is critical. I think the winner of the AFC South takes the No. 4 playoff seed, even with the Texans currently at 5-3.

5. Denver Broncos (6-3)
The Broncos are once again going to lead on the strength of their defense. Denver isn't perfect, especially on offense, but they're still 6-3 and in position for a playoff spot.. The team looks very similar to last year: a stout defense and a just-good-enough offense. The Broncos will still push for the AFC West crown.

6. Kansas City Chiefs (6-2)
A win over the Raiders was key for KC and they're in the midst of a portion of their schedule where they play no one with a winning record until Week 12. They have a tough end of the year slate, but wins from here to Week 12 would give them a big cushion. The Chiefs have a two-win lead in the Wild Card race right now, but that could change. Several teams, including the Ravens, Dolphins, Bills, Bengals and even Chargers, Colts and Titans have a shot.

1. Dallas Cowboys (7-1)
Dak Prescott didn't look great against the Eagles early, but still found a way to deliver a win. That's a big sign for the rookie QB. Prescott has done everything Dallas has asked, and the best ground game in the NFL led by Ezekiel Elliott and a great offensive line is a major reason for the team's success. Even the defense has exceeded expectations so far this year. Dallas is the favorite in the NFC East, although the looming question of Dak or Tony could cause issues. The only team in the NFC with one loss, Dallas deserves the top spot. The schedule gets a bit harder, but it's manageable.

3. Seattle Seahawks (5-2-1)
The Seattle offense is struggling. The defense is great, but a hobbled Russell Wilson has not been able to move the ball enough. Even with the problematic offense, the Seahawks look like a playoff team. Remember, it's a very close race for the top of the NFC, but that tie could end up hurting Seattle.

4. Minnesota Vikings (5-3)
This Vikings defense is still very good, but the team as a whole has come back down to earth after a 5-0 start. The offensive line must get better and quickly, as that's been the root of their problems. The Vikings have the making of a playoff team, but the Packers and Lions are still in the mix here.

5. Green Bay Packers (4-4)
The Packers' offense is still having issues. The team can't run the ball and the seat of Mike McCarthy is starting to get a bit hotter. I prefer the Packers to the Lions, but both have some problems. Both wild card spots are going to be contested.

6. Arizona Cardinals (3-4-1)
I have no idea who will end up taking this spot. There's the struggling Cardinals, the NFC East teams in the 5-3 Giants, 4-4 Eagles and 4-3-1 Redskins, the 5-3 Lions, and even the 4-4 Saints and 3-5 Bucs. But I don't really trust any of those NFC East or South teams, outside of Dallas. The 3-5 Panthers can't be counted out, but they've got an uphill battle. The Lions look like an 8-8 team to me, although that might end up being enough to get in. This should remain a close race until the end of the season. For now, I'll go with the Cardinals. This team still has talent.