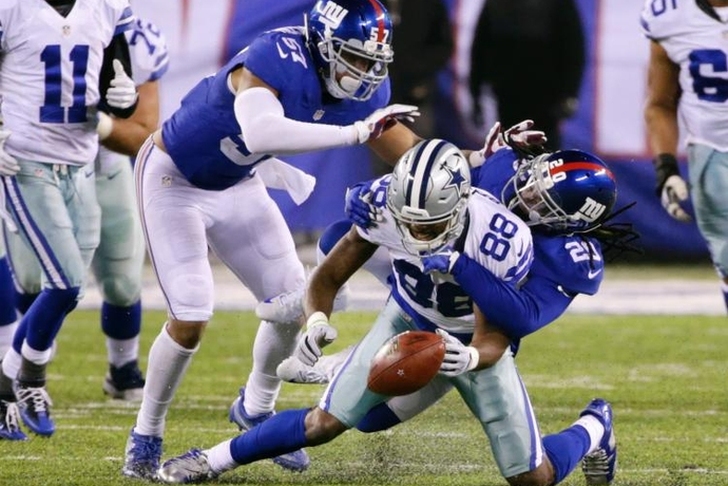 The first 14 weeks of the 2016 NFL season are now complete and the playoffs are nearly here. The playoff picture still murky, especially in a few divisions and the wild card races, but we have an idea of which teams will actually push for a playoff spot. The Cowboys are the only team to clinch a playoff berth, but a few others could do the same this week.

This list could change a bit each week and while it's not quite the same as power rankings, it should look somewhat similar. This accounts for team's schedules as well as their divisions, so it's not based solely on record. So, here are my projections for the NFL Playoffs after 14 weeks.

1. New England Patriots (11-2)
The Patriots haven't clinched a playoff spot yet, but they're about to. A win or a Dolphins loss gives them the AFC East title. A win also gives them a first round bye. The Patriots, even without Rob Gronkowski, look like the best team in the NFL.

2. Kansas City Chiefs (10-3)
The Chiefs really have the Raiders' number. They hold the tiebreaker thanks to the season sweep and that might just get them the division title. The AFC West winner will get a bye, and the Chiefs are in the best position. A win Sunday will clinch a playoff berth as well. I think both the Raiders and Chiefs lose a game down the stretch, but the tiebreaker benefits the Chiefs.

4. Houston Texans (7-6)
It's not pretty, but the Texans are still the favorite in the AFC South, thanks to a 4-0 divisional record so far. That could change, but I think the Texans, even with terrible QB play, are the favorites in the South. The division will be decided in the season finale, when the Texans visit the Titans. The Texans have the easier schedule left as well.

6. Miami Dolphins (8-5)
The Broncos had this spot last week, but that loss to the Titans really, really hurt them. They're now tied with the Dolphins, and Miami has an easier schedule. Both teams get the Patriots, but the Dolphins face the Bills and the Jets while the have to play the Chiefs and the Raiders. I think the Dolphins, even without QB Ryan Tannehill, have the easier path. Still (realistically), in the mix are the Ravens and Titans.

1. x-Dallas Cowboys (11-2)
Dallas has already clinched a playoff spot, hence the "x" next to their name, but they failed to clinch a bye and the NFC East because they lost to the Giants last week. Dallas still controls their own destiny and is in a good position, but the final three weeks of the year carry added importance. Since the Giants play the Lions this week, the Cowboys will get some help towards either winning the NFC East or securing a bye.

2. Seattle Seahawks (8-4-1)
The Seattle offense has been inconsistent, thanks to their poor offensive line. No one wants to play them in Seattle, but on the road is another story. They can clinch the NFC West with a win or a Cardinals loss this weekend. Their schedule isn't too daunting, with home games against the Rams, Cardinals and then a road trip to face the 49ers. I think they win out and sneak in as the No. 2 seed.

3. Detroit Lions (9-4)
Detroit is playing great right now, but their schedule is about to get very tricky. They play the Cowboys, Packers and Giants the rest of the year, with only the Packers in the season finale at home. The Lions could lose all three, or have the NFC North title on the line in Week 17. The Lions can clinch a playoff spot this week though, if they win and the Packers lose.

4. Atlanta Falcons (8-5)
The Falcons remain the top team in the NFC South, although the Bucs are making a strong push for that title. The Falcons have the easier schedule and would likely hold the tiebreaker in the event of a tie. The Falcons and Bucs both play the Saints and Panthers, but Atlanta plays the 49ers while the Bucs get Dallas. Atlanta isn't guaranteed a spot (and can't clinch this weekend), but I like their positioning. There is very little difference right now between the No. 2, 3 and 4 seeds.

5. New York Giants (9-4)
The Giants, much like Kansas City with Oakland, just have the Cowboys number. Dallas doesn't want to face them in the postseason. The Giants aren't out of the NFC East race yet and are in great position to at least get a wild card. They can actually clinch a berth this weekend. They must win and have the Redskins, Packers and Vikings lose.

6. Washington Redskins (7-5-1)
The No. 6 seed in the NFC continues to give me trouble. There are several teams seriously in the mix for this spot: the Packers, Redskins, Buccaneers and Vikings. I wouldn't be surprised if any of those first three teams got in (I would be a bit surprised if Minnesota did). The Bucs are in the best position, but their schedule is probably the most difficult of the three. If they beat the Cowboys Sunday, I think they'll get in. I don't think they will, which opens the door for another team. I give the nod to the Redskins, who must beat the Panthers this week to stay in good position. This final playoff spot will come down to the final week.