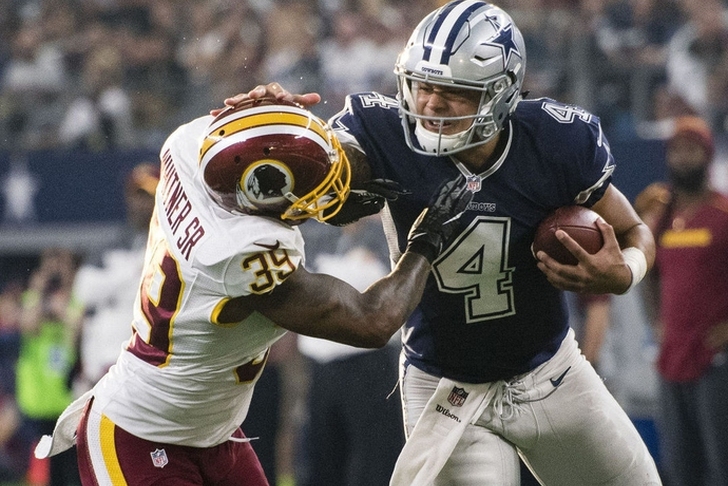 The first 12 weeks of the 2016 NFL season are now complete and the playoff picture is starting to become. It's still murky, especially in a few divisions and the wild card races, but we have an idea of which teams will actually push for a playoff spot. No team has clinched a playoff spot, although the Cowboys could this weekend. The Browns and 49ers have already been eliminated from playoff contention.

This list should change a bit each week and while it's not quite the same as power rankings, it should look somewhat similar. This accounts for team's schedules as well as their divisions, so it's not based solely on record. So, here are my projections for the NFL Playoffs after 12 weeks.

1. New England Patriots (9-2)
Tom Brady is playing some of the best ball of his career. A loss to Seattle hurts their overall standings, but not in the AFC. I still think they come out on top, especially since they have one of the NFL's easiest schedules the rest of the season. The potential loss of Rob Gronkowski for the season is a concern, but I think they'll survive in the regular season.

2. Oakland Raiders (9-2)
Congrats, Oakland. You're the favorite in the AFC West, and thus, the No. 2 seed. The offense has been wonderful this year, and the defense is showing improvement. However, the schedule gets harder the rest of the way. Derek Carr wasn't as sharp in the second half of last season as he was in the first. Will that be the case again this year?

3. Pittsburgh Steelers (6-5)
The AFC North will come down to the Steelers and the Ravens. The Bengals are out of it, and the Browns are the Browns. I like the Steelers the rest of the way. I think they're the better team and they have a much easier schedule the rest of the season (Ravens have T-8th hardest and Steelers just the 26th).

4. Houston Texans (6-4)
It's not pretty, but the Texans are still the favorite in the AFC South, thanks to a 3-0 divisional record so far. That could change, but I think the Texans, even with terrible QB play, are the favorites in the South. The Colts can't play defense or protect Andrew Luck, while the Titans are still a bit inconsistent. After all, they should have lost to the Bears last week. The winner of the AFC South takes the No. 4 playoff seed.

5. Kansas City Chiefs (8-3)
Don't count the Chiefs out of the AFC West race. They are an impressive 3-0 in the division. This is a really good defensive team and no division winner will want to play them. They'll be in the postseason. It's just unclear if they'll be as a division winner or have to play a wild card game.

6. Denver Broncos (7-4)
The Broncos are once again going to contend on the strength of their defense. Denver isn't perfect, especially on offense, but they're still 7-4 and in position for a playoff spot. The loss to KC hurts, as does a very challenging rest of season schedule. The Dolphins, Bills and Ravens/Steelers will make pushes, but the Broncos still hold the advantage.

1. Dallas Cowboys (10-1)
Dallas is on the verge of clinching a playoff spot. Their magic number is down to just two. If they beat the Vikings Thursday and then either the Bucs OR the Redskins lose, the Cowboys are guaranteed at least a wild card spot. They've won 10 straight and although there are some defensive issues, this team is the best in the NFC right now.

2. Seattle Seahawks (7-3-1)
The Seattle offense looked back to normal, before laying an egg against the Bucs. But, they are in firm control of the NFC West and that win over New England was impressive. A tie could affect their seeding, but they have the 31st-easiest schedule the rest of the year.

3. Atlanta Falcons (7-4)
The Falcons remain the top team in the NFC South, although the Bucs are making a push for that title. They have some issues on defense, but the 29th-easiest schedule the rest of the year sets them up perfectly for a playoff spot and maybe even a bye.

4. Detroit Lions (7-4)
Detroit has a game lead over the Vikings (which is really two since the Lions won both matchups). While the Vikings are in a decent position, the 5-6 Packers are struggling to keep up. Every Lions game has been decided by one score or less, which is why they have just a +9 point differential. The Lions will finish around. 500 (probably at least 8-8 since they're 7-4), but the rest of the games could be close ones again. I don't love this team, but they have a narrow lead in a weak NFC North.

5. New York Giants (8-3)
The NFC Wild Card is a cluttered mess right now, with several teams in the mix. The Giants are the one team I feel confident about slotting in one of the spots. I don't totally trust New York, but they are 8-3. The schedule is about to get very tough, but they're in perfect position.

6. Washington Redskins (6-4-1)
As hinted at above, you can take your pick of the contenders here. I'll go with Washington, since they have an easier schedule than all the rest of the playoff threats. Plus, they have a slight lead on everyone else too. The Bucs, Eagles, Packers, Vikings and even the Cardinals or Panthers could end up taking this spot. But Washington has kept Kirk Cousins upright and they've got a strong pass rush. That gives them the edge. I still expect to flip flop on these wild card spots a few times before the end of the season.