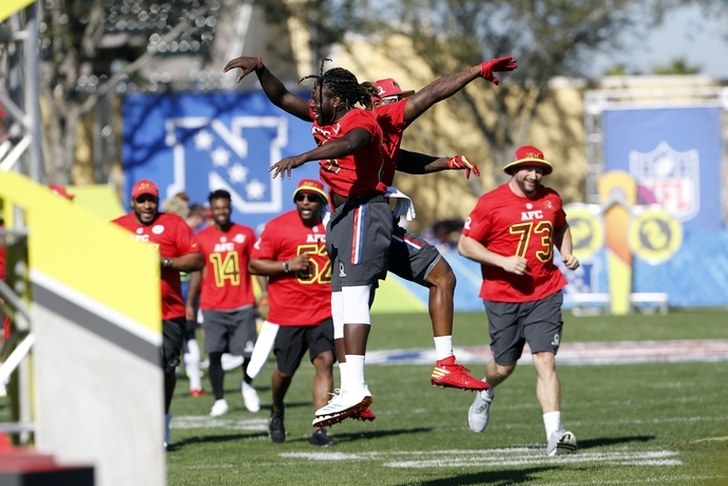 After years of fans complaining about the Pro Bowl being a lackluster and unwatchable product because of players not trying hard, the game delivered this time around.

Everyone took the game seriously - especially the defenses. There were plenty of hard hits, sacks and turnovers forced, and in the end, it was the AFC defense that led the way to the conference's 20-13 win over the NFC.

Those defenses set the tone for the rest of the game in the first quarter, where neither offense was able to put any points on the board. However, the AFC finally got on the board on the first play of the second quarter when Alex Smith hit Delanie Walker for the 26-yard touchdown.

After the two sides traded interceptions on the two ensuing drives, the NFC managed to tie the game when Drew Brees found Doug Baldwin for the 47-yard touchdown.

The AFC was able to respond right before halftime when Andy Dalton found Travis Kelce for a 23-yard touchdown.

After that, no one was able to find the end zone again. Both Justin Tucker and Matt Prater made two field goals in the second half, but that was all the scoring there was after halftime. The NFC had the ball with 2:39 left with a chance to drive down the field and tie the game with a touchdown, but Cousins was picked off by Lorenzo Alexander in the red zone with just over a minute to play.

An interception, a lateral and a fumble...a CRAZY sequence to end the #ProBowl! pic.twitter.com/9f6HNEvs6v

Geno Atkins racked up up two sacks to lead the AFC defense, while both Aqib Talib and Casey Heyward were credited with two pass breakups. On offense, Andy Dalton went 10/12 passing for 100 yards with a touchdown and an interception, while T.Y. Hilton caught five passes for 58 yards.

For the NFC, Everson Griffen recorded a game-high three sacks - three of seven sacks the NFC had as a team. Odell Beckham Jr. led the offense with six catches for 93 yards, and Drew Brees played the best of any quarterback for the conference, going 10/19 passing for 112 yards with a touchdown and interception.

For winning the game, every AFC player received $61K, while members of the NFC team received just $30K.