This Is The Current AFC Playoff Picture, And What Each Team Needs To Happen To Make It 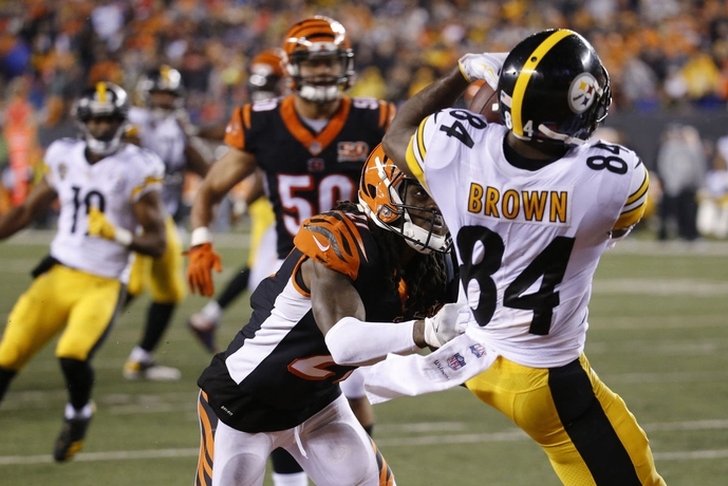 The NFL Season is coming to an end with only four regular-season games left.  Only six teams can make it in from the AFC, but there are still 15 teams in total who still have a chance to make the playoffs. With a win on Monday Night Football, the Steelers remain the top seed in the AFC while the Patriots are nipping at their heels. For some teams every week is a playoff game because one loss could be the difference between being in or on the outside looking in.

None of the teams have clinched a playoff seed yet, but if the playoffs were to end today, these six teams would make the AFC playoffs.

AFC Playoffs:
1.) Pittsburgh Steelers (10-2): 1st in AFC North, own the tiebreaker over the Patriots because of their strength of victory.
REMAINING OPPONENTS: vs. Ravens (7-5), vs. Patriots (10-2), at Texans (4-8), vs. Browns (0-12)
According to these postseason percentages, the Steelers have higher than a 99 percent chance of making the playoffs. The Steelers will play the Patriots in Week 15 which may decide the number one seed.

4.) Kansas City Chiefs (6-6): 1st AFC West, own tie breaker over the Chargers and Raiders
REMAINING OPPONENTS: vs. Raiders (6-6), vs. Chargers (6-6), vs. Dolphins (5-7), at Broncos (3-9)
The Chiefs have lost six of seven games and have seen their division lead slip away. The Chiefs season ends with three games against division opponents, but their playoffs start this week against the Raiders. They control their own destiny with a schedule that should favor them.

6.) Baltimore Ravens (7-5): Wild Card
REMAINING OPPONENTS: at Steelers (10-2), at Browns (0-12), vs. Colts (3-9), vs. Bengals (5-6)
A three-game winning streak for the Ravens may end with a tough matchup against a division rival, the Steelers. After the Steelers, the road gets much easier for this Ravens team who is playing well.

These nine teams are still technically in the hunt for the playoffs and the percentages next to them are their chances of making the playoffs at this current moment.

In The Hunt:
7.) Los Angeles Chargers (6-6) - 25% chance to make the playoffs
REMAINING OPPONENTS: vs. Redskins (5-7), at Chiefs (6-6), at Jets (5-7), vs. Raiders (6-6)
The Chargers started the season 0-4, but have won six of eight games and have a realistic chance of making the playoffs. If they win out, they are in and win the AFC West. Currently, the Chargers have the tiebreaker over the Raiders and will play them in Week 17, which may decide the division. The Chargers also own the tiebreaker over the Bills who they beat in Week 11.

8.) Buffalo Bills (6-6) - 16% chance to make the playoffs
REMAINING OPPONENTS: vs. Colts (3-9), vs. Dolphins (5-7), at Patriots (10-2), at Dolphins (5-7)
The Bills basically need to win out, which won't be easy with the Patriots in Week 16 and Nathan Peterman possibly starting at quarterback.The Bills own the tiebreaker over the Chiefs and Raiders due to wins earlier this season.

9.) Oakland Raiders (6-6) - 20% chance to make the playoffs
REMAINING OPPONENTS: at Chiefs (6-6), vs. Cowboys (6-6), at Eagles (10-2), at Chargers (6-6)
The Raiders road to the playoffs won't be an easy one considering they are playing four teams in the playoff hunt. They get a struggling Chiefs team on Sunday and with a win and a Chargers loss, the Raiders would be sitting in first place in the division. The Raiders own the tiebreaker over the Chiefs, but since the Chiefs beat the Chargers and the Chargers beat the Raiders, this is the reason why the Raiders are here at nine. The Raiders do play the Chargers in Week 17 which could be the deciding factor for a playoff spot.

For the teams below, they need to win out and essentially "hit the lottery" to have any chance of making the playoffs.