Cowboys Rumors: Did Ezekiel Elliott Quit in Cowboys Loss to the Broncos? 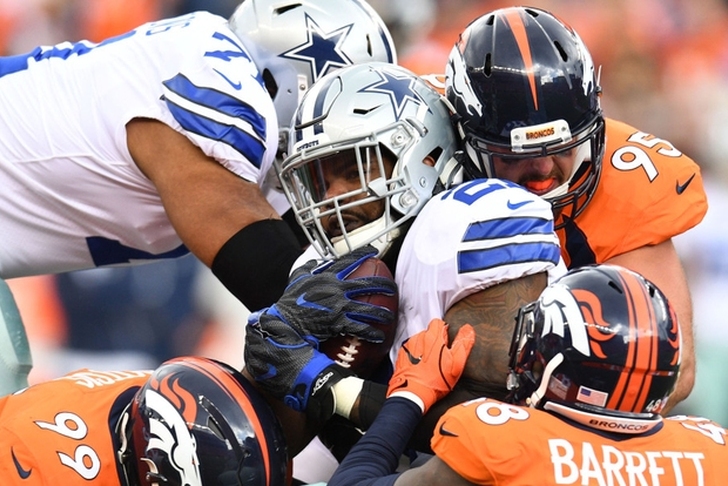 The Dallas Cowboys just can't keep star running back Ezekiel Elliott out of the headlines. After a poor performance against the Broncos where Elliott saw only nine carries and had eight yards, many people are saying Elliott quit on his team. Hall of Fame running back LaDainian Tomlinson wasn't afraid to put Elliott on blast.

"I didn’t like the way he quit today...He absolutely quit on his team today.” -- @LT_21 on Cowboys RB Ezekiel Elliott

You really hope Elliott didn't quit on his team especially with the laundry list of issues he has been dealing with this offseason. The Cowboys coaches, fans and especially his teammates have been supportive of Elliott so seeing his effort in the Cowboys 42-17 loss to the Broncos is alarming. Chat Sports wants to know if you think Elliott quit on his team.

Did Ezekiel Elliott quit on the #DallasCowboys in their 42-17 loss to the Broncos?

From what I saw, Elliott did give up on the Cowboys in the second half, but not that I am saying that he should have quit on his team because that is never acceptable. Why are we not talking about the horrible play calling of the Cowboys? The fact that Elliott had four carries heading into halftime is mindblowing to me. The Denver Broncos have an average run defense and arguably the best pass defense in the NFL. The Cowboys ran the ball only 14 times and threw the ball 50 times. How can the Cowboys pass the ball 78 percent of the time and expect to win? I understand they were losing most of the game but this wasn't a total blowout at halftime. Run the ball Cowboys!

I digress as a football fan who was looking forward to a great game. The Cowboys will be on Monday Night Football in Week 3 against the Arizona Cardinals and I expect them to win this game easily. If Elliott doesn't get 20 plus carries against a Cardinals team who almost lost to the Colts I will lose my mind.