Could One Of These Players Break Chris Johnson’s 40 Time Record At The NFL Combine? 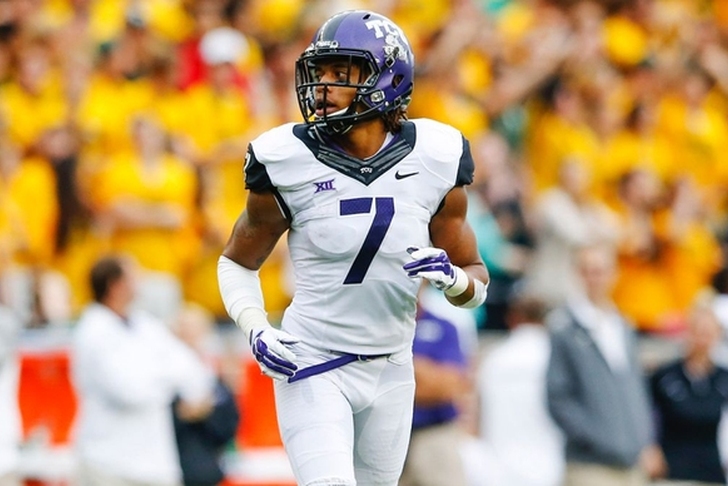 With the 2016 NFL Combine nearly here, it's time to ask the same question that is asked every year. Will someone break Chris Johnson's 40-yard dash record of 4.24 second? Johnson pays attention to it each year, and Dri Archer nearly broke it in 2014 with a 4.26 time.

Adidas is offering $1 million to any player who breaks the record, giving prospects even more reason to run as fast as they can. So which player could break the record this year? Here are 4 Players That Could Break Chris Johnson's 40 Time Record At The NFL Combine.

Fuller has an outside shot at topping Johnson's mark. He can fly, but he's not a track runner. While he should run at or below a 4.4, his start will determine if he can break Johnson's record. Fuller could be a first round pick, and won't escape the second round.

The former QB blew up the Senior Bowl and should do the same at the Combine. OSU's coaches claim he's posted a 40 time in the 4.3s and he looks that fast on the field. Miller might not break Johnson's mark, but he should be one of the biggest winners at the Combine. Expect him to go by the end of the second round, and possibly in the first.

This is the first of two names that many fans won't recognize. Sims is one of the better small-school prospects in this year's draft and can fly. NFL Scouts clocked him in the mid 4.3s in the past. Extra training time could lower that number for Sims, giving him a chance to set the record. If he can't pass Johnson, he could set the mark for fastest 40 time by a defensive player. That mark is currently held by several players at 4.28, with DeMarcus Van Dyke doing it most recently in 2011. Sims will likely be an Early Day 3 pick.

Listenbee doesn't have the name recognition of fellow TCU WR Josh Doctson, but he's a true burner. He caught 74 passes for 1,432 yards, meaning he averaged a blistering 19.9 yards per catch. He has a track background and has posted a 10.04 100-meter dash. He might not be able to break the record, but he has the best shot. At the very least, don't be surprised if runs a sub 4.30. Listenbee could rise in the pre-draft process, and could be a Late Day 2 selection.