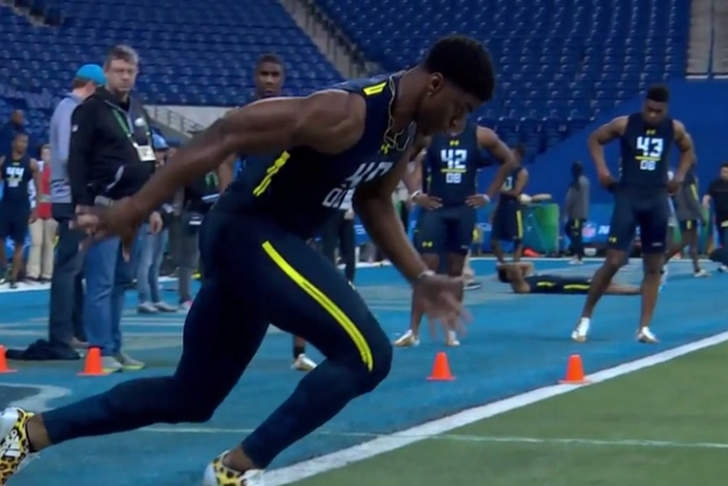 The 2017 NFL Combine is in the books, as the defensive backs took the field for drills and workouts on the final day of the combine. Some players in today's DB group exceeded expectations, while others came up short - and experienced a hit to their draft stock. With that in mind, it's time to break down some of the winners and losers from today's combine action.

WINNERS:
Obi Melifonwu, S, UConn Huskies
Melifonwu was the biggest safety at the combine, checking in at 6-foot-4 and 224 lbs, and tested extremely well. After a strong performance at the Senior Bowl, he put up 17 reps on the bench press, ran a 4.4 40-yard dash and had a broad jump of 141 inches - the second-highest mark in combine history. That level of athleticism will cause a lot of teams to go back and re-evaluate him, and could push him into the first round.

Jamal Adams, S, LSU Tigers
Adams came into the combine already projected to be a top five pick, and he solidified that status on Monday. He performed well in drills and was excellent in interviews, adding to the notion that he's a safe, high-upside prospect to draft.

“He was awesome,” one scouting director said of Adams, via Eric Edholm of Yahoo Sports. “Came across as mature, serious … all the positives you can imagine. The boxes were checked off.”

Marshon Lattimore, CB, Ohio State Buckeyes
Lattimore was already expected to be the top cornerback taken in the draft, and he also only helped his ranking at the combine. The highlight was his 40-yard dash times of 4.36 and 4.37 at 6-foot-1 and 192 lbs., and even though he had his workout cut short due to a tight hamstring, he solidified his status as a top 10 pick.

Jabrill Peppers, SS, Michigan Wolverines
Peppers was on our winners list yesterday after he worked out with the linebackers, but he was on the field again today with the defensive backs. He had the most at stake as teams wanted to see how the linebacker-turned-safety would do in coverage drills. Safe to say, he succeeded.

LB24 on his jersey.
But it doesn't matter.

Overall, Peppers erased a lot of doubts about if he'd be able to make the transition to safety. He locked up his first-round status at the combine.

LOSERS:
Teez Tabor, CB, Florida Gators
Tabor came into the combine with a lot of off-field concerns due to his attitude, a fight with a teammate at Florida and multiple failed drug tests - which led to multiple suspensions. At the combine, he added some on-field concerns as well. He ran an underwhelming 4.63 40-yard dash and only posted nine reps on the bench. His stock is falling, and he may even fall out of the first round.

Nate Gerry, S, Nebraska Cornhuskers
His stock was rising after a good week at the Senior Bowl, then he posted a very slow 40 time (4.58) and struggled in on-field drills. He was known for his run-stopping ability at Nebraska, and his performance raised questions about his ability to cover in the NFL.

Rasul Douglas, CB, West Virginia Mountaineers
Douglas is another guy who had a bad combine after a promising Senior Bowl week. The 6-foot-2, 204-pounder was very slow in the 40 (4.59) and didn't look fluid in positional drills. He still as intrigue as a big corner, but needs to perform much, much better at his pro day.