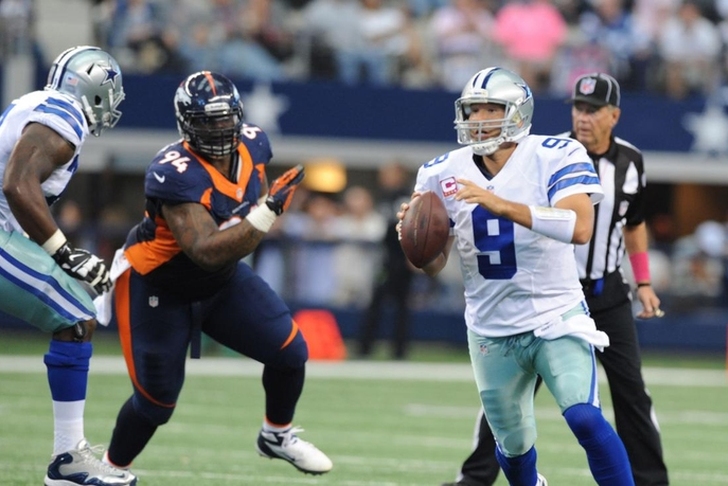 With the NFL Combine now in the books, the league has turned their full attention to the upcoming start of free agency this week. The new league year starts on Thursday, March 9, and teams are preparing for the two-day free agency negotiating window that opens today. During this time before free agency starts Thursday at 4:00 pm ET, teams may "negotiate all aspects" of the contract but can't finalize the deal. Here are the latest NFL news & rumors you need to know:

Broncos "ready to pursue" Romo
The Denver Broncos have been the team most heavily linked to Tony Romo this offseason, and they are ready to pursue Romo once he is released by the Dallas Cowboys (as expected), according to Mike Klis of 9News in Denver.

If it matters, and apparently it does, a deal between Tony Romo and the Denver Broncos would satisfy the “Do-Right Rule” that has been stated, along with a wink-wink, by Dallas Cowboys owner Jerry Jones.

Multiple NFL sources tell 9News Broncos general manager John Elway and the team are ready to pursue Romo if and when the quarterback is released by Jones and the Dallas Cowboys.

One agent source also told 9News that Romo’s preferred choice is the Broncos. Denver is not the only team expected to pursue Romo, though. There was buzz at the NFL Combine the Houston Texans would also be interested, but would they give up on Brock Osweiler after paying him $21 million in 2016, his first year with the team, and another $16 million guaranteed this season?

Broncos general manager John Elway and head coach Vance Joseph expressed their confidence in both Paxton Lynch and Trevor Siemian at the combine, creating the thought that Denver may not pursue Romo. However, that is not the case.

Five teams interested in Pryor
The Cleveland Browns have said that re-signing wide receiver Terrelle Pryor is their top priority right now, but several other teams are interested in signing him, according to Mary Kay Cabot of Cleveland.com.

There are likely other teams that will express interest too.

Over the next two days, Rosenhaus will know exactly what he can get for the 1,000-yard receiver on the open market, and then the Browns will have an opportunity to match or exceed the best deal.

Rosenhaus and Pryor also will weigh the offers to find the right opportunity for him.

Cleveland did not place the franchise tag on Pryor, which would have paid him $15.826 million for the 2017 season. Head of football operations Sashi Brown also said that while the Browns want to re-sign him, they won't "be panicked if he's not" on their roster - indicating they don't want to overpay for Pryor.

In his first season as a full-time receiver, Pryor caught 77 passes for 1,007 yards and four touchdowns.

Chargers to release Fluker
The Los Angeles Chargers are set to release offensive lineman D.J. Fluker, the team's first-round pick in the 2013 draft, the team announced.

“Few players have shown the amount of passion and dedication that D.J. has shown for us the last four years," general manager Tom Telesco said in a statement. "D.J. was the ultimate teammate who gave every ounce of effort he had to help our team.  I will have great memories of D.J.’s time with the Chargers and wish him the best of luck with his career."

The team had picked up Fluker’s fifth-year option, which was worth $8.821 million for 2017, but that salary was not guaranteed. Fluker, who has started every game he has played in his four-year career, can play both tackle and guard. He is one of the top offensive linemen now available on the open market.