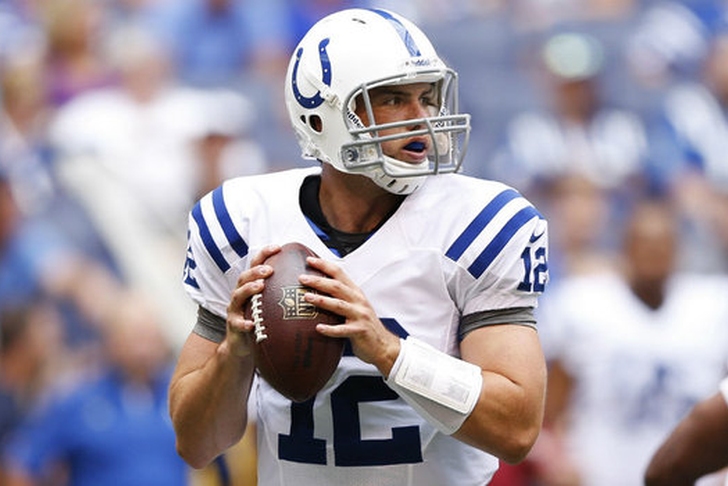 The only comfort I can take in an underwhelming 8-8 start in week one is that nobody really knew what many of these teams were going to bring to the table. Anyone out there place bets on Geno Smith having the week's highest completion percentage and Tom Brady having the lowest?

Two overtime field goals in Atlanta and Chicago along with disappointing showings from Brady and Tony Romo dragged me down to .500 this week. That aside, after seeing the 32 teams take the field for the first time, a better week of picks is sure to be on the horizon.

After jumping out to a 24-point first-half lead against Cleveland Sunday, Pittsburgh's tired defense gave off a "Help! I've fallen, and I can't get up" vibe in the second half. While they still escaped with a three-point win after letting Cleveland tie it up in the fourth quarter, the Steelers won't beat the Ravens if the defense can't play both halves - especially in a short week. Baltimore's squad can't drop another home division game and start the year 0-2, and the Ravens have two bad tastes they're eager to get out of their mouths: Sunday's loss to the Bengals and the lingering Ray Rice controversy.

Ladies and gentleman, two of your current co-leaders of the AFC East: the Miami Dolphins and Buffalo Bills. Okay, so it's only been a week. How often are these teams going to be able to say that, though? Miami outplayed New England Sunday on both offense and defense, and if they can frustrate Tom Brady, I'm going to bet they can probably get to E.J. Manuel as well. The biggest headline in Buffalo this week was that Buffalo Sabres' owner Terry Pegula was buying the Bills and keeping them in the city... but he won't be in uniform Sunday.

I thought Robert Griffin III was going to look bad in week one, but yikes. RG3 looked flat-out awful on Sunday. And confused. And scared. You know things are going south for the Redskins when the dynamic duo of Chad Henne and Allen Hurns are being picked to beat you in Washington.

If we've learned anything from Dallas' three consecutive 8-8 seasons, it's that the Cowboys love to be .500. An 0-2 start wouldn't be a good idea if America's Team wants to make noise in the NFC East, and neither would three interceptions from Tony Romo if the team wants to win Sunday.

Most players look forward to Monday Night Football because all eyes in the sports world are on them. That wasn't a good thing for the Giants this past Monday, though, as all the bright lights of the national spotlight did for New York were illuminate their horrendous showing in Detroit. Playing on Sunday afternoon might mean fewer people are watching this time around, but it won't change the result for Big Blue.

An 0-2 start in New England? That's never happened with Tom Brady under center. While Minnesota's defense looked great Sunday in St. Louis, that was against back-up quarterbacks Shaun Hill and Austin Davis...not quite Tom Brady.

The Saints were arguably the most impressive week-one losers in falling to Atlanta on the road in overtime. Drew Brees and the offense looked dangerous as usual, and the defense looked not-so dangerous... as usual. Unless the Hoyer-led Browns can play like they did in the second half against Pittsburgh for an entire game, though, the Saints shouldn't have much of a problem. On another note, anyone know the over-under for "Johnny Football" chants in Cleveland's home opener?

Potentially the best game of the week, this Detroit-Carolina contest may be the toughest to pick. Cam Newton should be under center Sunday, legitimizing the offense to go along with a defense that looked impressive against Tampa Bay. There'll be trouble if the pass rush doesn't get to Matthew Stafford Sunday, but I'll give the slight edge to the home team as long as Newton's healthy.

If you didn't know who Austin Davis was before Sunday, don't fret; you're not alone. He's the guy who'll be starting under center for St. Louis Sunday in Tampa Bay. I don't think I'd pick the Rams even if their first-string quarterback was healthy, and having Davis out there instead doesn't really inspire confidence.

We all know the Seahawks don't lose at home, but they also don't lose on the road very often either. The defending champs beat the Packers by 20 points to open the new season, and a similar result is likely when you pit the league's best defense against the turnover-prone Philip Rivers.

Houston's defense dominated against Washington Sunday, and the J.J. Watt-led pass rush was constantly swarming RG3. There's nothing to indicate that it'll be any different in Oakland Sunday, but don't expect Derek Carr to play poorly - he had a promising showing against the vaunted Jets defense in his first career start.

There's no defense that can measure up to Seattle's, but things won't get much easier for Green Bay when they host Rex Ryan's Jets, who aren't scrubs on defense by any means. Nevertheless, I'll take Aaron Rodgers over Geno Smith any day of the week, even if New York's defense is better.

After Kansas City's poor showing at home against the Titans, it's hard to imagine them going into the Mile-High City and beating Peyton Manning. Last year's meetings between these division rivals were some of the best games we saw in 2013 - let's hope the Chiefs can play well enough to make it interesting.

It's always a gamble putting your faith in Jay Cutler...but with Matt Forte, Brandon Marshall and company at his disposal, I'm not convinced that San Francisco's defense can tie down the Bears. Sure, they made Tony Romo look terrible last Sunday, but Romo really didn't need much help. It'll be a real shot in the arm for the Niners if they can't christen the brand-new Levi's Stadium with a win.

Both teams faced 17-point deficits at halftime in week one, and while Philadelphia was able to overcome Jacksonville to eventually win by 17, Indianapolis' comeback effort came up a touchdown short against the Broncos. Both second halves were impressive nonetheless, and I think Andrew Luck will get the job done in what promises to be a compelling Monday-night showcase.