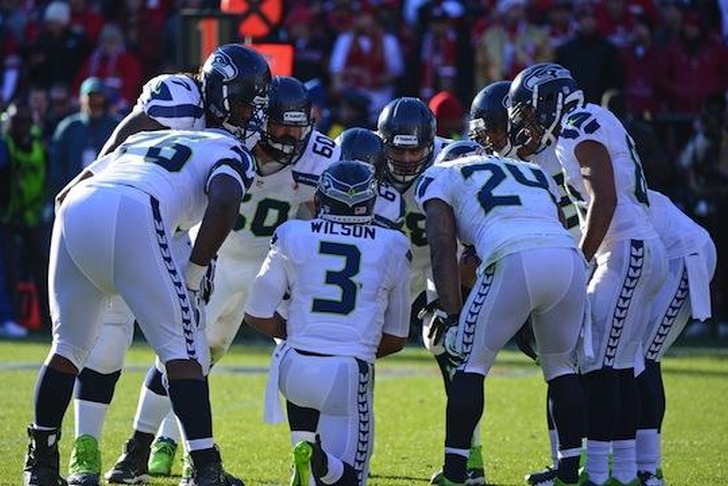 With the first week of the NFL season upon us, we can finally stop examining the 32 teams on paper and actually see the players take the field. Unfortunately, though, our week one picks are pretty blind, as we still have a lot to learn about each and every team.

This week's action is highlighted by five divisional games and two excellent matchups - the defending Super Bowl Champions Seattle Seahawks host the Green Bay Packers in the new season's first game, and Peyton Manning and the Denver Broncos get a visit from Andrew Luck and the Indianapolis Colts on Sunday Night Football. These could easily be two of the best matchups we'll see all season.

I'm not sure you could ask for a better matchup to kick off the season. Expect an excellent, smart game by both teams, but the Packers defense can't compete with Seattle's...and the Seahawks just don't lose at home. Still, if anyone could beat the champs at CenturyLink Field, it's Green Bay - especially if Aaron Rodgers has a superb game.

Atlanta can't be nearly as bad as they were last year, can they? They're getting Julio Jones back, and could compete for the division title if they get off to a good start. They'll have to recover from a 0-1 start, though, unless they can rattle Drew Brees.

I have much more confidence in Matt Cassel than I do in Shaun Hill at quarterback. The Rams will have the home-field advantage, and Zac Stacy could be one of the breakout rushers this season. Last time I checked, though, Adrian Peterson's still going to be wearing purple and white on Sunday afternoon.

Cleveland will play a competitive game Sunday, and it won't surprise me if they take it (even with Johnny "Football" on the sideline holding a clipboard). I'll take the more mature of the two teams to start the season, but be on the look-out for the Brian Hoyer-Jordan Cameron connection.

I'm trying my best to look for a bright spot for Jacksonville this week, I really am... Oh, here we go: After Sunday's over, that's one less week you have to wait until Blake Bortles starts.

I'll take the road underdog in this one, as Geno Smith will have to re-earn my trust after last season. Rex Ryan's defense will look stout as always, and I'm sure Oakland's rookie quarterback Derek Carr will make a mistake here and there. That said, I like the Maurice Jones-Drew/Darren McFadden backfield tandem, the Raiders' (slightly) improved defense, and Carr's potential...at least for this week.

Without seeing these two teams play a game yet this season, it's basically a coin flip...but the game is in Baltimore, and the Ravens have a lot of weapons on offense in contrast to the Bengals. As good as Cincinnati's defense could be this year, I think there'll be too many targets on the field in purple for the Bengals to handle.

An offense featuring E.J. Manuel, Sammy Watkins and C.J. Spiller has the potential to be explosive someday...but Sunday won't be that day. Manuel is still figuring out how to be a consistent NFL quarterback, Watkins is battling injury, and Spiller can't do it all by himself. Not to mention Jay Cutler has three 6-foot-3-inch-plus targets and Matt Forte to give the ball to.

Robert Griffin III has a lot to prove this year, so I'm going to let him prove it before I pick him to win a game. It doesn't help Washington when J.J. Watt and Jadeveon Clowney are going to be chasing him around on his surgically-repaired knee all day long.

I want to believe Jake Locker can be a successful quarterback in the NFL, but he's given me no reason to think he can beat a Kansas City defense that was one of the league's best for the better part of last season. You also can't forget about Tennessee's own unimpressive defensive unit, who will have Jamaal Charles to contend with.

The Dolphins are probably the biggest threat (by default) to the Patriots in the AFC East, but this is once again New England's division to lose. The home crowd could propel Ryan Tannehill to outduel Tom Brady...but I wouldn't exactly rush to bet your kid's college fund on that happening.

This pick would probably be completely different if Cam Newton were 100 percent healthy. However, we still don't even know if he'll play, let alone play well. A Tampa Bay defense run by Lovie Smith should be enough to secure a victory this week, even if we aren't sure what the offense is going to bring to the table.

This San Francisco defense isn't going to be nearly the same without Navarro Bowman and Aldon Smith to start the season. The Cowboys offense is going to have to score more points than the sub-par Dallas defense gives up each week, which Tony Romo and company will accomplish this Sunday.

The first matchup between Peyton Manning's current and former teams was a very entertaining contest, and Indianapolis pulled off the upset last year. You should see a similar style of game, but a different end result this time around. One can't help but wonder, though, if the abrupt loss of Wes Welker will haunt the Broncos.

Here are two teams with opposite expectations coming into the season - Detroit's aiming sky-high, but Giants fans aren't exactly thrilled with their teams' prospects. Still, this is the first Monday-night game of the season, so Eli Manning and the G-Men will bring their A-game in an effort to prove naysayers (like me) wrong.

Arizona has the potential to open a lot of eyes across the league this season, while San Diego will look to get off to a faster start than they have in years past. Both teams should have high-scoring offenses in 2014, but the Cardinals defense is poised to be one of the top 10 in the league as well. One or two Philip Rivers interceptions may prove to be the difference.