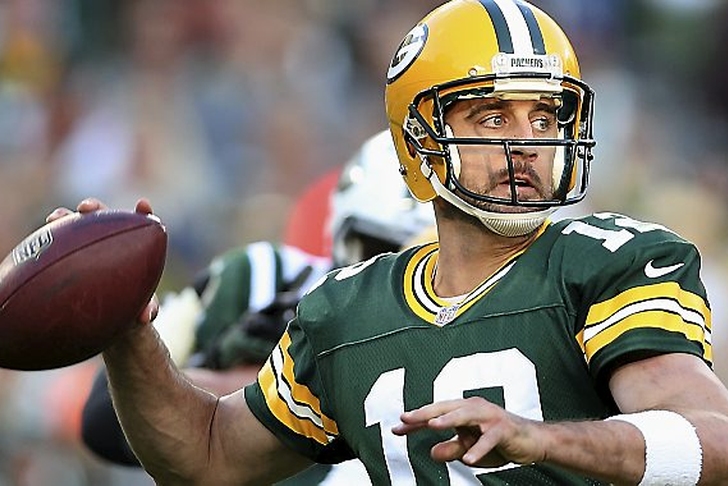 The Cowboys' big win over the Saints last Sunday night, along with the Buccaneers' and 49ers' upsets, put me in the green for week four, and the big picture is starting to become clearer in the NFL.

Kirk Cousins' five turnovers, J.J. Watt's 80-yard interception-return touchdown, and Teddy Bridgewater's outstanding debut performance were the difference between a good week and a great week, though. Let's see if 300-pound linemen and rookie quarterbacks can go back to doing what they usually do and stick to the status quo for the sake of these week five selections.

Aaron Rodgers sure did know what he was talking about when he told the Lambeau faithful to relax and not worry about the Packers' 1-2 start. Four passing touchdowns and one 21-point win in Chicago later, it seems that Green Bay has found its groove heading into October. Teddy Bridgewater was impressive in his pro debut, but it's up in the air whether his sprained ankle will even allow him to play on a short week (ED: He didn't. Good call!) Giving the Packers the home-field advantage won't help things, regardless of who's under center for Minnesota.

While both teams suffered 20-plus point losses last week, one team still comes off as a serious contender. Chicago is 2-0 on the road to start the season, and they travel to face a Carolina team that was exposed on offense and defense last week in Baltimore. Cam Newton has to get fully healthy for the Panthers to once again perform like a playoff contender, but who knows if he'll make it back to 100 percent at any point this season.

Tennessee is reeling off of three straight losses by an average margin of 22 points. Meanwhile, Cleveland has suffered two losses, and both have been at the hand of last-second field goals. Coming off of a bye week means more rest for the Browns, and I think we'll see just how big a difference a healthy Jordan Cameron can make very soon.

This would be a potential trap game, if Philadelphia wasn't coming off of a miserable performance in San Francisco and wasn't at home Sunday. After the Eagles offense put up zero points and barely eclipsed 200 total yards, it's hard to imagine them not showing up ready to redeem themselves on their home turf. Plus, isn't St. Louis' quarterback still Austin Davis?

The New York football Giants have turned their season around and evened their record at 2-2 following consecutive victories in weeks three and four. They host an Atlanta squad who leaves little to be desired when playing on the road, and should take home a third straight victory if they play at the level they have recently. It's beginning to look a bit crowded at the top of the NFC East...

New Orleans hasn't lost a game in the Superdome with Sean Payton on the sideline since 2010. Add the pressure to win that comes from starting the season 1-3, and I don't see the Saints dropping the ball at home and allowing Tampa Bay to get their second win of the season before they do.

This battle of the Lone Star State features two 3-1 squads who currently hold at least a share of their division lead. It'll be interesting to see Dallas' high-powered offense take on Houston's smash-mouth defense, including the league's leading rusher, DeMarco Murray, versus the defensive MVP of the first quarter of the season, J.J. Watt. As of right now, though, the Cowboys' success seems much more sustainable.

It's hard to understand the logic behind benching E.J. Manuel for Kyle Orton, other than perhaps head coach Doug Marrone trying to save his job. No matter, just ask the Bears or Broncos - Kyle Orton has never been the answer to anyone's quarterback questions... except maybe "Who's our backup?" Nevertheless, Detroit is clicking on all cylinders, so which Bill is taking the snaps shouldn't much matter unless Jim Kelly's making a comeback.

Baltimore showed off its offensive explosiveness against Carolina Sunday on the unofficial "Steve Smith Day," but they'll face a much tougher test in Indianapolis this week. Andrew Luck has put up numbers in the past two weeks that have made his fantasy owner's very happy, but both games were against teams with sub-par defensive fronts. The Ravens defense is playing better than the Colts' at the moment, and while Luck and the Indy offense should still have a solid day, the Baltimore pass rush could prove to be the difference.

Pittsburgh can't lose to two winless teams in back-to-back weeks, can they? Probably not. Granted, Ben Roethlisberger is getting older and Blake Bortles is getting better, but the veteran is still the superior professional quarterback this week.

Arizona's defense has carried the team to a 3-0 start, and Drew Stanton has done a serviceable job filling in for an injured Carson Palmer. As great as that's been, they have to travel to Denver and face a Broncos team who's looking to re-establish its dominance after falling short in Seattle.

This game is a virtual toss-up in my opinion, and could be quietly one of the best games of the week. When the teams match up evenly, both with momentum, take the home team.

Geno Smith is going to start the game, but who knows if he's going to finish it. Add in the fact that an east coast team is traveling out west, and I don't think the Jets defense is going to hold up.

Bill Belichick has answered... or, not answered.... shortsighted questions regarding New England's disappointing showings as of late and Tom Brady's future all week long. He and Brady are going to come out with something to prove on yet another primetime stage, and what better team to do it against than the last undefeated team in your conference? Shutting reporters' mouths is the main goal of the week for the Patriots - in addition to avoiding a 2-3 start, of course.

Even though Seattle is a much more vulnerable on the road than at home, you should still expect them to beat Washington Monday Night - especially after seeing the debacle that was Kirk Cousins and the Redskins last week. There are enough variables involved in this matchup, however, that could lead to a Redskins' upset; depending on which version of Cousins shows up, whether or not the Seahawks underperform on the road, and the added spontaneity of Monday Night Football, you never know...