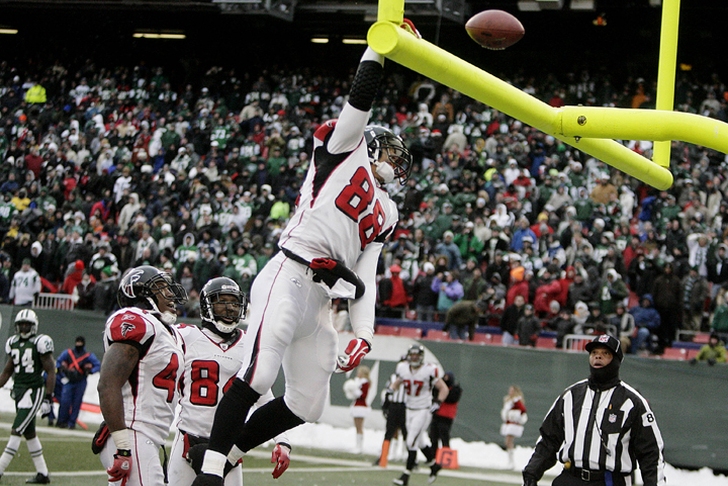 Welcome to the Chat Sports Week 5 Breakdown! We'll preview and predict the score of every game being played this weekend, while helping you decide which games are worth watching and which games you're better off missing (that means you, Jacksonville).

The NFL clearly doesn't want people to watch Thursday Night Football. This game featuring quarterbacks Brian Hoyer and EJ Manuel will come down to whether the Browns can stop Buffalo's surprisingly competent rushing attack, which features two guys you've probably had on your fantasy team even though you've never seen them play - Fred Jackson and CJ Spiller. Buffalo is putting up over 150 yards per game on the ground, but Cleveland is allowing just 79 - we think this is the week Cleveland's defense remembers they're playing for Cleveland. Buffalo takes this battle of teams you often forget are still in the NFL, 17-9.

The Saints, finally back at full strength after their year in Goodell-inspired purgatory, might be the best team in the NFL that isn't the Denver Broncos (simmer down, Seattle - we'll get to you later). Jimmy Graham has vindicated everyone who took him in the second round of their fantasy draft, and with Darren Sproles making defenders look ridiculous weekly, this is an absolutely terrifying offense. The Saints D has been on point as well - they're giving up under 200 passing yards a game. That doesn't bode well for Jay "Rex Grossman 2.0" Cutler, who's already responsible for six interceptions this year. New Orleans will take this one on the road, 34-20

The Bengals are one of those teams it's going to take eight or nine weeks to actually get a read on. So far, they've scraped by a miserable Pittsburgh team but put together a huge fourth-quarter comeback to beat Green Bay. They've also lost a close game to Chicago (who aren't that bad) and a terrible game to Cleveland (who are Cleveland). The Patriots, meanwhile, are 4-0 despite all their non-Tom Brady players you've heard of getting hurt. This has all the makings of a dogfight, but since we're 0-75 when betting against Bill Belichick's team over the past decade, we're taking New England on the road, 27-21.

Green Bay had a week off to lick their wounds after falling to 1-2 in Cincinnati, and they'll be hoping to regain some ground in the NFC North against a hot-and-cold Detroit team. Green Bay is allowing 311 passing yards per game (putting them 28th in the NFL in that category), and that doesn't bode well against Detroit's dangerous air attack. Still, having seen how good the Packers are when firing on all cylinders (remember that absolute evisceration of Washington in Week 2?), we can't pick against the Packers at home. Green Bay wins a classic shootout, 41-35

Did anyone think these two teams would be a combined 7-1 going in to this matchup? Put your hands down, you liars. The jury is still out on the Titans, who have feasted on bad opponents so far, but the Chiefs look like the real deal. Andy Reid (!?) has already led the Chiefs to twice as many wins as they had last year, and Alex Smith (!?!?) has looked like a franchise quarterback - we can't believe it either. Kansas City has a fantastic defense, and Tennessee just lost QB Jake Locker to a hip injury for 4-6 weeks. Titans backup QB Ryan "Did you know he went to Harvard?" Fitzpatrick doesn't convince us. Kansas City wins this one on the road, 31-16.

Seattle needed overtime to beat the Texans last week, but that's been the only hiccup in their season so far. The Seahawks defense has been incredible so far this year, and when the offense gets going as well, this team can beat anyone in the league (except maybe Denver). Last week, the Colts demolished Jacksonville on the road, but since Jacksonville should seriously be getting some kind of handicap (Starting up by 20? 14 players allowed on defense? Send us your ideas) that doesn't mean anything. Indy's only real weakness is their iffy run defense, and the running game is one of Seattle's best assets. The Seahawks grind this one out, 28-24.

There's absolutely no good reason to watch this game unless one of your immediate family members is playing in it. This year's Jacksonville Jaguars are like the Bad News Bears, but the underdogs aren't lovable and no one is learning any valuable life lessons along the way. St. Louis "wins", 24-6.

Watchability: Life is too short to watch this game

Until their Monday night loss to the Saints, the Dolphins were hanging with the Chiefs as this year's shockingly competent, out-of-nowhere team. Despite the 3-1 record, we aren't convinced that the Dolphins are legit - they're still haven't played a game where they've gained more yards than their opponent (even the Browns somehow outgained them 291-275 despite losing the game 21-10). Baltimore, meanwhile, has spent the last eight months on a party boat somewhere celebrating their Super Bowl win, and are just now realizing that there's a football season going on. Joe Flacco tossed five interceptions last week against Buffalo (Buffalo!), and we can't take him on the road against a team that's picked off five passes already this year. Miami squeaks by, 30-27.

Chip Kelly must be salivating while he goes over tape of the Giants defense. The G-Men have been the year's biggest dud, and while Philly's defense isn't anything special, their offense has looked great - they're averaging over 198 rushing yards per game. There's no way the Giants can keep up with this offense over 60 minutes, even at home - the Eagles are going to run away with this game, and it won't be pretty. Tom Coughlin's hot seat is going to get even toastier as Philadelphia torches the Giants, 44-21.

The Panthers are 1-2, but we think that record is deceptive - they gave the Seahawks a run for their money in week 1, and they had a fluke loss in Buffalo in week 2 when EJ Manuel turned into Doug Flutie on the game-winning drive. They took out their frustrations on the Giants in week 3, crushing them 38-0, and now they've had a bye week to fine-tune their game. Arizona's game plan relies on Carson Palmer and the creaky-but-dangerous Larry Fitzgerald to turn back the clock and play like it's 2006. This worked twice - against Detroit and Tampa Bay - but they got blown out by the Saints and lost to St. Louis. Cam Newton is due for a monster game, and we thing this is the week he makes it happen, as the Panthers roll 34-27.

This year's Cowboys looked like they had finally turned a corner after an impressively complete game against St. Louis, but a meltdown in San Diego brought them back down to earth. Peyton Manning has been playing like he set the difficulty to "rookie" mode, and Dallas won't be the team that finds an answer for the Broncos' obscene passing attack. The Cowboys will valiantly keep this one competitive in the first half, but Denver will pull away and leave Dallas with a 45-28 win.

San Francisco's season is stuck in neutral, but the Texans might be just what they need to get in gear. Matt Schaub and the Texans gave away a 14-point fourth quarter lead to Seattle last weekend, and the Niners will need to build on their 35-11 win over the Rams to keep the momentum going. San Francisco needs another big game out of Anquan Boldin, and they need Colin Kaepernick to find the gaps in Houston's excellent secondary. We think San Francisco's 27-7 home loss to Indianapolis was a fluke, and they'll get back to business on Sunday night with a 31-17 victory.

The Chargers have been decent on offense and terrible on defense. The Raiders have just been terrible. Terrelle Pryor could give San Diego some problems on the ground, but there's no way Oakland's secondary (which is an injury away from starting this guy at Free Safety) can stop Philip Rivers and San Diego's surprisingly competent passing attack. Darren McFadden has also picked up his annual hamstring injury (congratulations to those of you who put your money on Week 4 in the Run-DMC injury pool), so Oakland's offensive game plan will rely on Terrelle Pryor performing a series of miracles. San Diego wins this one 35-10.

The Jets were somehow 2-1 with only a close loss to New England blemishing their resume, but then they went down to Tennessee. A 38-13 hiding courtesy of the Titans has them at 2-2 going into their Monday Night Football appearance, and the Georgia Dome isn't the friendliest place to try and get your season back on track. Atlanta is 1-3, but all of those losses were against solid teams (New Orleans, Miami, and New England) and by less than a touchdown. Atlanta's only serious weakness is their secondary, and we're highly skeptical that Jets rookie QB Geno Smith can make them pay. The Falcons will right the ship on Monday night, routing the Jets 38-10.