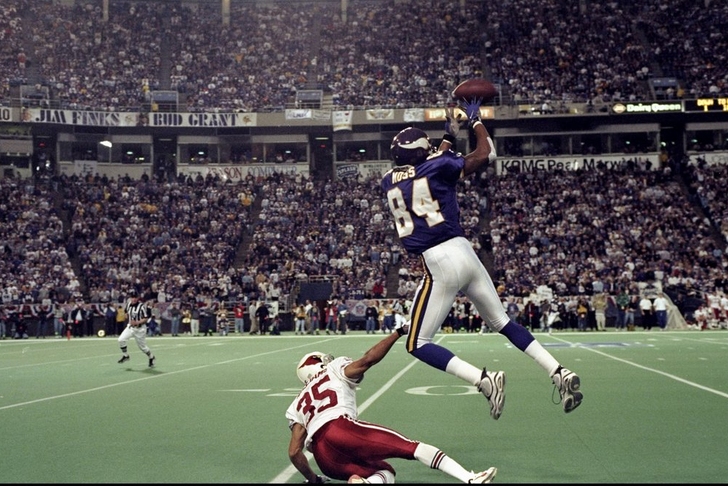 Randy Moss turns 37 today, so we thought we'd share some of our favorite moments from his controversial, constantly entertaining career.

People often forget that Randy Moss and NBA cult hero Jason Williams were close friends growing up - the two played both basketball and football together in their home town of Belle, West Virginia. This awesome Nike commercial from back in the day includes some rare footage of the two before their ascent to stardom.

It didn't take long for Moss to make a name for himself - after catching two touchdown passes in his NFL debut, he really got America's attention in his first Monday Night Football appearance. Against the rival Green Bay Packers, Moss set the tone with this impressive TD catch:

Moss ended up with 190 yards and two touchdowns on the night - and that's not even counting a 75-yard TD catch on the game's first possession that was called back for holding.

The Miracle on Turkey Day

One of the most iconic plays of Moss's career came on Thanksgiving day back in 2000. With Minnesota up 20-9 late in the third quarter, Moss put the game on ice with a catch that seemingly defied physics:

In a 2005 playoff game against Green Bay at Lambeau field, Moss scored a touchdown that tied things up at 24 in the fourth quarter. Randy then proceeded to saunter over to the middle of the endzone and pretend to moon the fans, who were not amused (neither was the NFL...more on that later):

The mooning incident led to a $10,000 fine from the league office, which Moss didn't seem to care much about. In a now-legendary YouTube clip, he explained his indifference to local reporters:

In 2007, Randy Moss teamed up with Tom Brady to form one of the most deadly tandems in league history. The Patriots scorched through the regular season undefeated thanks to their record-breaking chemistry (Moss caught 23 of Brady's record-setting 50 touchdown passes), and although things ultimately didn't go their way in the Super Bowl, Moss still had quite the highlight reel to show for his efforts:

Love him or hate him, Randy Moss was one of the most exciting players in recent NFL history. While he made plenty of enemies and pissed off plenty of fanbases, even the most passionate Moss haters (we're looking at you, Oakland) will have to admit - the guy was never boring.