The Insane, Ridiculous Story Behind The Incriminating Pictures Of Jerry Jones 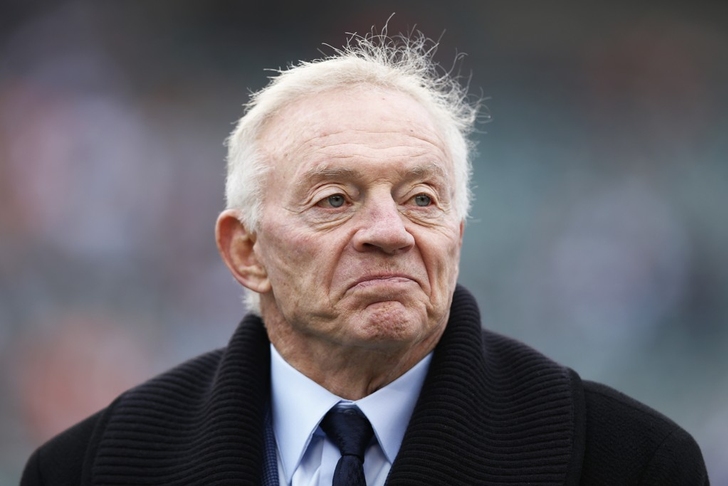 On Sunday, Cowboys owner Jerry Jones was forced to break his silence regarding the incriminating photos that surfaced early last week. "Someone has misrepresented photos taken at a restaurant five years ago for their own purposes," Jones said, via the Dallas Morning News. "I'm just not going to comment on it."

That's about all reporters got out of Jones, who hadn't said anything about Tuesday morning, when the pictures hit the internet. None are explicitly not safe for work, but you wouldn't want to show them to your grandma, either:

When people started digging into where these photos came from, things got weird.

The source of these photos turns out to be a 20-page document/manifesto called 'Uncovering the Truth', written for and addressed to Jerry Jones. The author of this document is a man named Frank Hoover, who worked in the entertainment technology industry in Dallas. Hoover's background is murky at best, and it doesn't help that his 20-page letter is completely, utterly insane.

Here's the story Hoover tells in his document, translated as best we could:

- Frank Hoover fell into a job fixing up televisions for a mid-level drug dealer/pimp who went by the name 24k. Business was good, and reached the point where the two were living together and selling marked up televisions to the Dallas criminal underworld.

- At some point in 2011, Hoover learned that 24k had set up and taken the incriminating pictures of Jerry Jones, then used them to try to extort the Cowboys owner. The extortion attempt apparently failed when 24k couldn't sell the pictures to TMZ (reasons why are unclear, although Hoover thinks the pictures were stolen from the TMZ office).

- After finding out about the plan, Hoover loaded the pictures from 24k's computer onto a USB drive, then destroyed the hard drive and any other copies. He then fled Dallas (and 24k) in late 2012, hoping to sell the pictures to Jones in exchange for a safe exit from the criminal life.

- Hoover took the pictures to the Cowboys on several occasions, asking for protection in exchange. Hoover was repeatedly declined/denied, and the 20-page letter is his last-ditch attempt to get Jones' attention.

This is all fairly hazy because at some point between 2011 and 2014, Hoover decided "oh wait, I'm the son of God". About 75% of his letter to Jones (linked at the bottom of this article) is made up of astrology, numerology and other insane rambling, and for those of you not willing to sift through 20 pages of gibberish, we've included the best parts here:

So...yeah. There's also Hoover's Twitter account, which is more of the same numerology, but with additional creepiness directed at Taylor Swift.

So what do we take away from all this? Based on the story behind these pictures and the insanity Hoover radiates, we aren't willing to say these pictures are definitely of Jerry Jones...but it sure looks a whole lot like ol' Jerry. Hoover was reportedly well-connected in the Dallas sports world, and it's not at all out of the question that he knew people who knew Jones - we're just gonna need a little more confirmation than "it's true because of biblical signs, plus I'm the son of God." For those of you unafraid to dive headfirst into the crazy, here's the full letter.