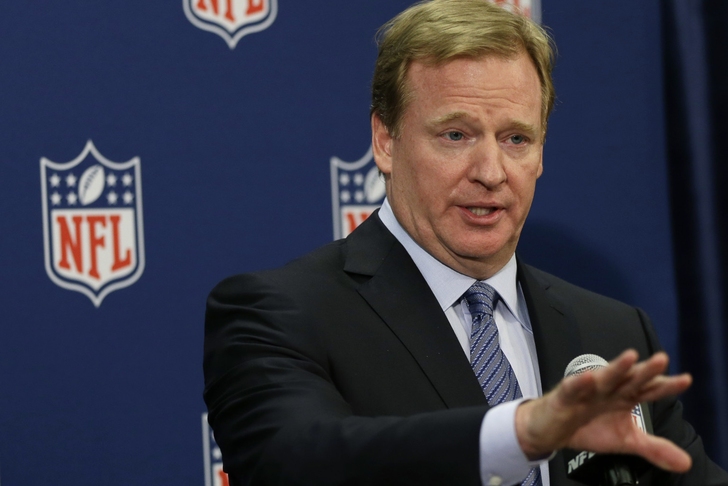 Despite an agreement having been reached between the NFL and NFLPA in August of 2011 to conduct HGH testing, neither side can come to a compromise on how to implement said testing -- meaning that no HGH testing currently occurs.

According to Mike Florio of Pro Football Talk, "The NFL hasn’t pushed the issue very aggressively, in large part because the league realizes that, before the players will have needles stuck into their bodies and blood samples drawn, they have to buy in, completely."

However, with the league back in the spotlight with the 2014 NFL Draft approaching this weekend, NFL commissioner Roger Goodell rekindled the issue in an interview with NFL Media's Rich Eisen:

Well, we believe there’s no reason not to have it. We agreed to it in our Collective Bargaining Agreement three years ago. The world has accepted the science. There’s global understanding of that. And the union needs to sign off on that. It’s time to sign off on what we agreed to. They have raised issues. We have addressed all those issues. They’re now raising, from time to time, issues that are completely unrelated to HGH testing. But we think that there’s an obligation to the player’s health and safety that this should be implemented and for the integrity of the league. And maybe more importantly, it would be sending the right message to kids who play our game and every other game. This is not the way you play sports. You play sports by the rules and with fairness at the top of mind.

Despite holding some valid points, many believe that the hold-up is in regard to whether appeals on positive HGH tests should be dealt with through arbitration (the players' view) or by Goodell himself (the NFL's view).

Goodell, however, doesn't see it that way:

[T]hey’ve been unwilling or unable to agree to the testing program,” Goodell said. “And they’ve raised things like population studies; the science is not all the way there. In each one of those cases, they have been addressed either by us or by global standards. HGH testing has been happening on a global basis in other sports, in Olympic sports. That testing is there. There are no more excuses. Either you want to do it or you don’t want to do it. And we clearly, as the NFL, want to do it. And we think it’s best for the players.

Either way, it doesn't seem as if the union is willing to budge on the need for a third party to conduct arbitration appeals over positive tests -- meaning that we may not see a resolution to this matter for a while yet.