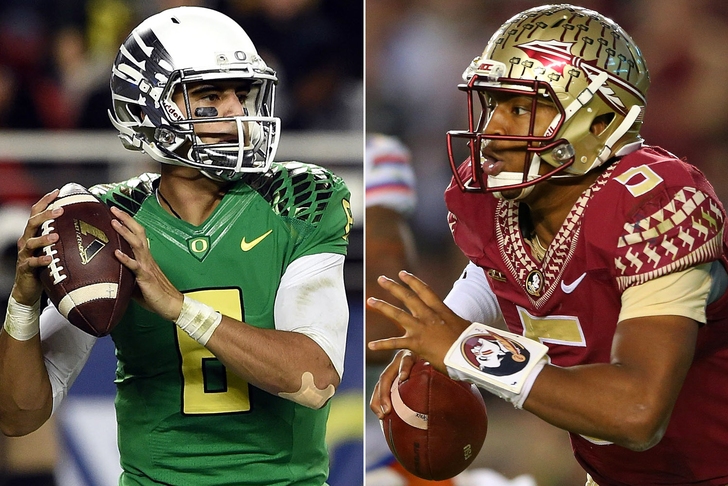 Quarterback is the most important position in the NFL, and when a team doesn't have a good one, they're usually not very good. Several teams in the league are in need of a QB and will look to the draft to try and find an upgrade at the position. Here are the top quarterbacks in the draft:

Halliday had his senior season cut short with a broken leg, but he was on pace to break every single-season NCAA passing record. He needs to add some weight to his 6'3", 196 lbs. frame, but he's a true pro-style quarterback with a strong arm.

Grayson is the sleeper in this year's quarterback class. He has excellent awareness, accuracy and athleticism, but playing in a small conference has some scouts worried if his game will translate to the next level. Grayson has an odd throwing motion that will scare some scouts away, but his intangibles are off the charts.

Mannion is rising up draft boards - some scouts have him as the third best quarterback prospect available - due to his outstanding size (6'6", 229 lbs.) and outstanding arm strength. However, he's not very mobile and can panic when pressured.

Petty has prototypical size (6'3", 230 lbs.), arm strength, accuracy, and mobility, but he comes from a spread offense system, and quarterbacks that come from those systems haven't seen a lot of success in the NFL. Questions remain about his ability to dissect a defense, but he has all of the physical tools to be a starter.

Hundley had a somewhat disappointing junior season, but his elite mobility and accuracy made him stand out to NFL scouts. He comes from a spread offensive system similar to Petty, so there are questions about his ability to read a defense.

The reigning Heisman trophy winner combines elite athleticism with amazing accuracy and smart decision-making, a combination that could make him a special NFL player. However, he also comes from a spread system, so while he's shown he can make every play that's asked of him, scouts want to see him read a defense from under center.

Winston has essentially become a lock to go first overall in the draft to the Tampa Bay Buccaneers, and it's easy to see why. Not only does he have elite football smarts and arm talent, he only lost one game during his entire collegiate career. He does come with off-field concerns, but he's erased all doubt while stellar pre-draft workouts.

Back to the NFL Newsfeed
28 shares Share on FB Share on Twitter
Another NFL article you might like: NFL Rumors: Jamal Adams Trade?, Hunter Henry Latest, Sam Darnold or Lamar Jackson & The Match With Tiger Woods, Phil Mickelson, Peyton Manning and Tom Brady >>