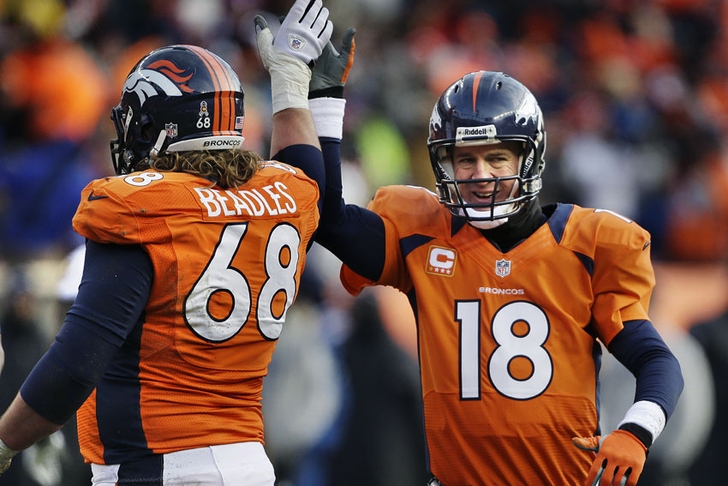 In a groundbreaking and controversial move, the NFL has banned players from giving each other high fives as a form of celebration after touchdowns. Just 2 days after the NFL banned the popular goalpost dunk celebration move, league commissioner Roger Goodell announced the ban via Twitter. It is still unclear if high fives after sacks, interceptions and long catches will be allowed.

In a brief conversation with a league official, the NFL and it's owners came to this decision due to potential player safety issues. "It's a safety thing. We have seen how we are exposed legally because of concussions that caused long term damage to former players. There have been several claims by players of calluses and soreness caused by giving too many high fives, and frankly it's concerning," a league official told us.

The NFL seems to be cracking down on anything remotely fun for the players these days, and the latest move was announced Tuesday: the league will no longer allow players to dunk the football over the field-goal post as part of their touchdown celebration. Time for Jimmy Graham and others to start working on adding some flash to their layups. The NFL had previously banned players from using the football as a prop during celebrations, so disallowing dunks from taking place is just a further adaptation of the rule.

Former Jets and Browns coach Eric Mangini has been a vocal opponent of the new rule: “If you polled people across America, all demographics, age groups, sexes, about what you do after you score a touchdown, a high five wopuld be the No. 1 answer,” said Mangini. “It wouldn’t be close. It doesn’t matter who you ask."

Former Giant, Homer Jones, who is believed to be the first to have high fived after a touchdown, agreed with the NFL's new rule. "My hand's are still sore, I have long term damage from all the high fives I gave back in the 70's. And, the NFL isn't doing anything to help my mounting medical bills to cover the treatment", Jones told the Associate Press.

A number of players expressed shock and dismay at the move. “It’s just absurd to me that a a fun celebration like that would be out so quick,” Colts linebacker D’Qwell Jackson said. “It’s crazy, and that (ticked) me off when I heard it.”

Leading hand surgeon Dr. Philip Micheals from Johns Hopkins hospital in Maryland said "Goodell is become more idiotic by the day. This is the most harmless celebration there is, and some crybaby on the competition committee whose team probably sucks got their way. Next thing you know, when you score a touchdown, you have to shake the hand of the person defending you and have to say,"Good effort.""

A league spokesperson added that the NFL is still deciding what the penalty would be, but is leaning towards a 15 yards penalty on the kick off. No word yet on what the home team would get penalized if fans were spotted high fiving in the stands.

One person who is happy about the change though, is high five handicapped Tom Brady:

(for those of you not paying attention, this is SATIRE - but we can imagine the NFL doing this!)