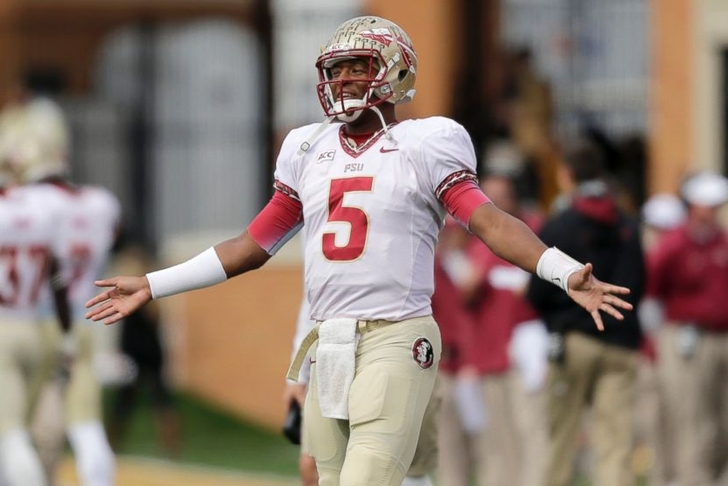 Draft season is coming up, and you know what that means...a new mock draft every day for three months. ESPN's Mel Kiper is usually on point when it comes to draft predictions, and while no one ever nails 100% of their picks, Kiper's mocks give a good general idea of how the draft will go down.

Unfortunately, most of his articles are behind the ESPN paywall...so we're here to go through his 2015 Top 5 with some quick analysis for each pick.

This is a bit of a surprise from Kiper, with most analysts moving Marcus Mariota ahead of Winston in recent weeks despite Oregon's title game flop. Kiper thinks Winston has the higher ceiling though, and and praises his football IQ, size, and potential. Interestingly, Kiper says he wouldn't start Winston right out of the gate...it's hard to see Tampa keeping him on the bench in favor of Mike Glennon or (yikes) Josh McCown.

If Mariota is still on the board, it's hard to see the Titans taking anyone else. Tennessee desperately needs a quarterback, and it's a safe bet that Mariota or Winston will be headed Nashville.

MORE: Marcus Mariota To The Titans? Examining The Pros & Cons

Kiper sees the Jags taking the best available player, and in this case, that's definitely Williams. Kiper acknowledges that the Jaguars' biggest need is on the offensive line, but there just aren't any elite offensive linemen in this draft who could justify such a high pick.

We're on the same page as Kiper here - we've had Cooper penciled in at #4 since the draft order was settled. The Raiders desperately need weapons to help out young QB Derek Carr, and Cooper has the potential to be a #1 receiver in this league for years to come.

Washington has enough needs to address that they should also be looking for the best player available, and Kiper sees Gregory as the best player on the board here. While Kiper isn't sure if he works best in a 3-4 or a 4-3, he sees him as a good enough prospect that it won't matter.