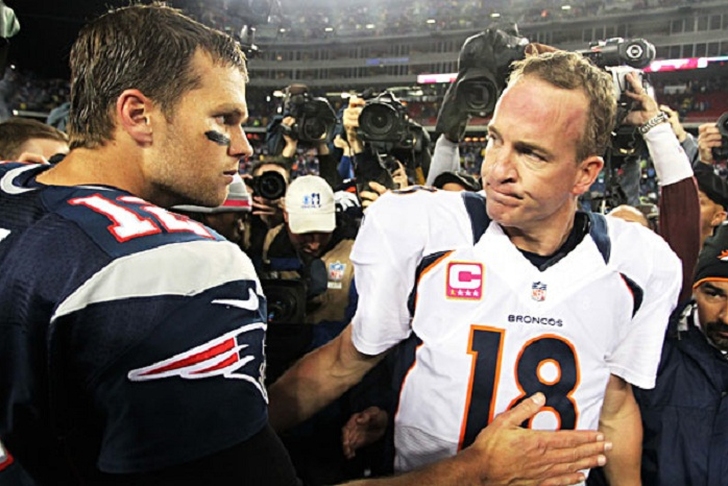 Sometimes you don't have to search for underlying storylines. Every once in a while, they're handed to you on a silver platter. Like this weekend in the Championship round of the NFL playoffs.

In the AFC Championship game, the two legendary figureheads of the last decade will face off once more when Peyton Manning and the Denver Broncos host Tom Brady and the New England Patriots. And just a few hours later, Russell Wilson and Colin Kaepernick will meet in a matchup of what could very well be two prominent figures in the immediate future of this league when the Seattle Seahawks meet the San Francisco 49ers in the NFC Championship game.

The best of the past decade facing off for one conference championship, followed by perhaps the best of the future battling for the other.

New England Patriots vs. Denver Broncos (AFC Championship): Everyone's talking about Manning vs. Brady more so than Broncos vs. Patriots; and it makes sense. Manning and Brady are the probably the two greatest quarterbacks of this generation, and they'll forever be linked and compared when it comes time to judge their careers. And both have something to prove in Sunday's matchup.

A win would secure a third trip to the Super Bowl for Manning, as he's won one and lost one in his previous appearances. Manning is looking to get to and win the Super Bowl this year to silence the critics who claim that his "lack of success" in the postseason keeps him from being considered the greatest quarterback ever.

With a New England victory, though, Brady would take the Patriots to the Super Bowl for a record sixth time. And while Brady is viewed as a very successful postseason quarterback, he has something to prove as well. If he were to fail to win Sunday, it will be nine years since Brady last won a Super Bowl. And while he does have three Super Bowl rings on his hand, those Super Bowl successes came early in his career when the defense was the lifeline of the Patriots. Brady was still coming into his own in those seasons, and the defense was what carried the Patriots for the most part. Albeit, Brady has led New England to two Super Bowls since (both of which were lost to the New York Giants), but Brady has yet to, in my opinion, win a Super Bowl in which he was "the man."

Nevertheless, while Manning-Brady will be the story of this game, it is important to point out that the two will not be on the field at the same time at any point during this game; meaning that there is much more to this matchup than just these two legendary signal-callers.

The Patriots are shockingly a run-first team all of a sudden. They beat down the Indianapolis Colts last week, 43-22, in a game which the New England running game accounted for six touchdowns and Brady accounted for none. LeGarrette Blount led the charge with 166 yards and four touchdowns, and Stevan Ridley added the other two scores. It's scary to think that Tom Brady is now supported by a solid three-headed rushing attack that includes Blount, Ridley and Shane Vereen, and could be considered a four-headed monster when Brandon Bolden joins the fray.

Denver's offense will be bringing an attack that may be the best in the history of the NFL, led by a quarterback who had the most passing touchdowns and yards in a single season ever, throwing the ball to four receivers with 10+ touchdowns and 750+ receiving yards each (D. Thomas, Decker, J. Thomas, Welker).

And if that wasn't enough, the Broncos add a solid running attack, led by Knowshon Moreno, who is the only running back in the history of the Denver Broncos to rush for over 1,000 yards and surpass 500 yards receiving as well, accounting for 13 touchdowns on the season.

So in a game in which neither defense has been very impressive, one very essential question for the Patriots is, and will remain, unanswered: How do you stop everybody? Or... how do you even stop anybody?

There is simply too much firepower on the Broncos offense for anyone without a top-notch defense to stop them. I expect a high-scoring game, and I expect Brady to do his best to keep up with Manning for most of the game. But I think the Broncos defense will have more success limiting New England's running game than the Patriots defense will have trying to stop Denver's onslaught. In the end, Manning just has too many toys to play with on offense. Broncos 41, Patriots 34.

San Francisco 49ers vs. Seattle Seahawks (NFC Championship): These teams have already faced each other twice, and there's really nothing new to consider. Both teams have young successful quarterbacks with reliable targets, solid tough running games, and two of the best defenses in the National Football League. But one team has something the other doesn't have.

The most significant home-field advantage in recent memory.

San Francisco has not faired well at all in Seattle in the past few meetings, to say the least. The Seahawks have outscored the 49ers 71-16 in their last two meetings in Seattle, and San Fran has turned the ball over seven times in those two games.

CenturyLink Field in Seattle is the loudest stadium in history, and clear communication is nearly impossible for visiting teams. That's bad news for the 49ers, going against a defense that requires every one on the opposing offense to be in sync in order to even have a chance to move the ball downfield. They can practice all the hand signals and lip reading they want; the 49ers will be lucky to be able to hear themselves think Sunday in Seattle.

But home-field advantage aside, I'd take the Seahawks in this game on a neutral field as well. Their defense is just a little bit better than San Francisco's as a whole, and Marshawn Lynch is playing slightly better than Frank Gore. The aim of both defenses will be to halt the running game and make the opposing quarterback beat them; and in that situation, I'll take Russell Wilson over Colin Kaepernick every time.

If I have to put the ball in the hands of one of those two quarterbacks to win the game, I want to give the ball to Wilson. I trust Seattle's signal-caller to make the right decision more than his San Fran counterpart, and I believe that Wilson is a better playmaker as well.

I've picked San Francisco to lose twice so far in the playoffs, and they've won both times. I should probably stop picking against the 49ers... but... Seahawks 26, 49ers 23.