Five Reasons Brett Hundley Should be a First Round Pick 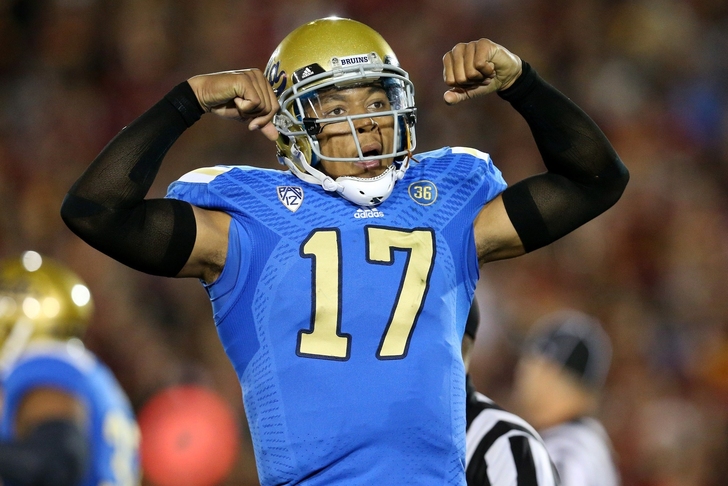 There are two quarterbacks that fans, coaches and general managers are discussing as first round picks despite ESPN analyst Mel Kiper Jr. saying that there are no franchise quarterbacks in this draft class. These two players, Jameis Winston and Marcus Mariota, deserve all the credit they get, but UCLA’s Brett Hundley should also be a first round pick. He doesn’t get as much recognition as Winston and Mariota because his teams weren’t as successful, and wasn’t a Heisman contender.

Here are the top five reasons why Hundley should be a first round pick.

1. Terrible offensive line: One of the biggest factors determining a QB's success is how they handle pressure. At UCLA, Hundley faced as much pressure over his three years as any quarterback in the country. This was especially bad early in the year, as Adrian Klemm, the UCLA Offensive Line Coach, certainly wasn't pleased with the offensive line play in the season opener against Virginia. Given his ability to handle pressure in college, he’ll handle it at the NFL level.

2. Completion percentage: Battling through terrible offensive line play, Hundley still completed 69 percent of his passes. Peyton Manning only completed 60.2 percent of his passes his senior year at Tennessee and ended up being the first pick in the draft. While Hundley's completion percentage can be attributed to plenty of short throws, he is very accurate on passes within 20 yards and often puts the ball right on the money. "He showed better accuracy than expected and once he zeroed in on his target I thought he showed good toughness staring down the pass rush from inside the pocket," ESPN analyst Todd MCcshay says.

3. Runs as a last resort: Hundley’s eyes mostly stay down field when the pocket collapses. He’s reminiscent of Russell Wilson in that regard. He can make big throws by waiting for things to develop before he takes off. In a league where running quarterbacks get criticized for running too much, Hundley’s ability to keep his eyes down field will get the attention of general managers. Plus, he knows how to avoid contact when running, making him less injury prone.

4. Reading defenses: Hundley doesn't necessarily work through all of his progressions, but he can read the defense well enough to know who to throw the ball too. After reading the defense for a second or two he analyzes what defense the other team is in and finds the receiver that is most likely to be open against that type of defense.

5. Back shoulder throws: No quarterback in this draft class completed as many back shoulder throws as Brett Hundley. When Hundley sees that the defense is in tight man-to-man coverage, he looks for the back shoulder throw because he knows the receiver will have the advantage over the defensive back. It works well in college, but will work even better in the NFL because it will draw pass interference calls.

Brett Hundley should be a first round pick in the NFL Draft on April 30 because of these five reasons.