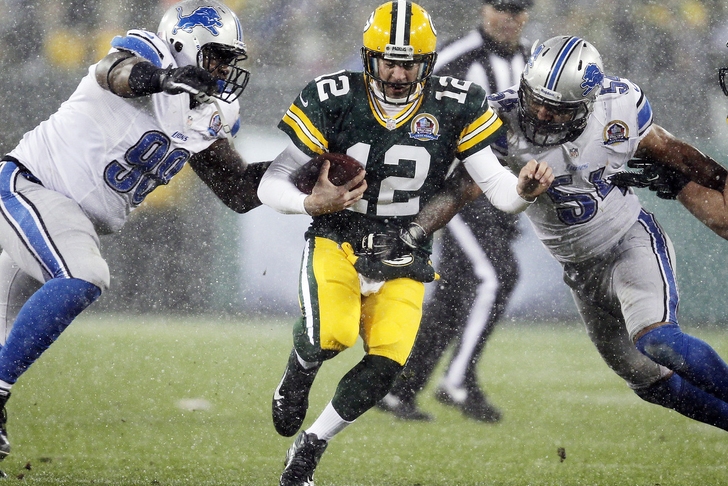 Welcome to Breaking the Book, your guide to the upcoming weekend’s football action from a handicapper’s perspective. This season, Chat Sports is proud to welcome handicapper Jason Cellura as a guest columnist. Jason is CEO of BookDogger, a social betting startup, who has vowed to provide Chat Sports readers with his expert insight on his picks each week.

Every Friday, we chat with Jason about the upcoming action and identify his top five plays of the week (pro or college). We’ll also include a rundown on the Blazing 5 picks made by everyone’s favorite talking head, Colin Cowherd, and compare the record of Jason and Colin each week to decide who the true superstar handicapper is.

We promised to get things back on track last week, and that’s exactly what we did, posting a 3-2 record and earning you a little cash in the process. Let’s take a look at how it all went down:

The Bad: The Texans (+2.5) blowing a 20-3 halftime lead to see us backdoored by the Seahawks. The absurdity reached its peak when, on 3rd and 4 with 2:51 remaining in the game, Matt Schaub decided to go all Pop Warner and heave a prayer into the flat to avoid a sack. We all know what happened next - the Sherminator stepped in front of the receiver and took it 58 yards the other way for a TD to force overtime. The Seahawks subsequently pulled out the 23-20 victory in the extra frame. On the bright side, I loaded up on Seattle -3 in the second half, so the damage was limited.

The Ugly: Oklahoma State coach Mike Gundy looking more like Stan Van Gundy, leading his Cowboys to a 30-21 thumping at the hands of former assistant Dana Holgerson and West Virginia (+18).

This week’s Cover 5 is one for the chalk. We’re backing three home favorites (Marshall, Green Bay and Atlanta) and one road favorite (Penn State). We also like the Nevada Wolfpack as road dogs in their visit to sunny San Diego.

Cody Fajardo is back, people. After missing two and a half games with an injured knee, the Nevada QB returned in full force last week, accounting for 470 yards of total offense in the Wolfpack’s 45-42 comeback win against Air Force. This guy, pure and simple, is a player. Unfortunately, Fajardo doesn’t play defense too, because Nevada’s rush D ranks fourth-worst in the country, allowing 270 ypg on the ground. This is a bit of a misleading stat, though, as Nevada has squared off against three top 20 rushing teams nationally (Air Force, Florida State and UCLA).

On the other side, San Diego State has struggled mightily to find its identity this season. The Aztec offense has been turnover prone (averaging three per game) while trying to find a way to get All-Mountain West RB Adam Muema rolling. Even with their offensive struggles, the defensive side of the ball is where San Diego State has been most disappointing.

Despite the return of nine starters from a year ago, the Aztecs are allowing 285 ypg passing (107th in the country) and 33 ppg. Things don’t get any easier this week as they are playing without defensive leader and All-Mountain West LB Jake Fely. Expect both teams to move the ball with success in this one, but the value is clearly with Nevada as Fajardo & Co. receives six points.

Larry Coker has done an excellent job of building the UTSA program, which is now in just its third year of existence. The Roadrunners have a solid dual-threat QB in Eric Soza (currently third in CUSA in passing ypg with 268) and have displayed nice offensive balance (141 ypg rushing) on their way to opening the season 2-3 (4-1 ATS). UTSA has matched up with the likes of Oklahoma St. (56-35 loss) and Arizona (38-13 loss) so they won’t be intimidated by the trip to Huntington.

Unfortunately for UTSA, they match up against a Marshall squad that’s had a bye week to stew on two close losses to Virginia Tech (29-21 in 3OT) and Ohio (34-31) during which they gave the ball away a combined seven times. Despite their recent turnover problems, the Herd, led by reigning CUSA player of the year Rakeem Cato, has an explosive offense which accounts for 486 ypg (292 passing / 194 rushing) and 40 ppg. While we fear a backdoor cover from a potent UTSA squad, we expect a riled-up Herd to get off to a strong start and never look back while comfortably covering the 14 point spread.

Indiana showed us two weeks ago that they weren’t yet ready to take the next step, losing 45-28 at home against Missouri. The Hoosier defense allowed a staggering 623 yards (343 passing and 280 rushing) in that game, taking their season averages to 463 ypg (106th nationally) and 33 ppg. The Hoosiers do possess a highly potent offense, led by the two-headed QB monster of Nate Sudfeld and Tre Roberson, which puts up an impressive 45 ppg on 547 ypg, but this week they meet their toughest test yet.

Penn State’s defense ranks 11th in the country, allowing 285 ypg and 14.5 ppg and figures to get a boost this week with the expected return of LB Mike Hull (who many hope will become the next great at Linebacker U). Despite a rough performance last time out, Penn State’s freshman QB Christian Hackenberg has lived up to the hype. He comes in having completed 63% of his passes for 1,027 yards and five TD’s, but has shown his youth in tossing four INT’s. Fortunately, he can rely on a steady Nittany Lion rushing attack that’s averaged 244 ypg over their last three outings. Penn State is the much stronger team in this B1G matchup. Expect them to get stops when needed and find plenty of success on the ground en route to a two score victory.

At 1-2 (1-2 ATS), Green Bay flat out cannot afford a loss against the division-leading Lions (3-1). Last time out, the Packers blew a 30-14 lead against the Bengals, losing 34-30 in a game capped off by a 58 yard Bengal fumble return TD with less than four minutes remaining. Detroit enters on a two-game winning streak, during which they’ve taken down the Bears and Redskins.

Matt Stafford has played like a number one overall pick, registering 309 ypg through the air, while Reggie Bush has proven to be a great addition, leading the team with 254 yards rushing and adding another 179 yards receiving. Despite the hot Lions start, we love power teams off a loss and a bye week. Add to that the Packers have won and covered in their last four games against the Lions, and we expect the Packers to rebound in resounding fashion. Lay the points and ride the Pack at home.

Much like the Packers, the Falcons desperately need a win here. They come in 1-3 (1-3 ATS), having lost two straight to the Patriots (30-23) and Dolphins (27-23). Atlanta has struggled to get any sort of consistent rushing attack going, averaging a paltry 82 ypg on the ground. This has led to a lot of pressure on Matt Ryan and his banged up band of receivers, who rank fourth in the NFL with 317 ypg passing.

The Falcons defense has also struggled, allowing 393 ypg (26th in the league) and 26 ppg (21st), with their primary issues coming against the pass. They get a bit of a break this week as the Jets bring rookie QB Geno Smith to town. Smith and the Jets are averaging only 17 points per game, ranking 29th in the league in both scoring and pass efficiency. While the Jets defense is back to its old ways (ranking second in ypg allowed, with 283), the Falcons absolutely need this game and are stinging from two tight losses. Look for Matty Ice & Co. to come up big and light up the Jets.

Colin managed to find his groove last weekend, posting his first winning record of the season with a 3-2 performance. Colin correctly backed the Chargers (+2), Lions (-3) and Saints (-6.5), but fell short on the Jets (+3.5) and Falcons (-2).

Colin likes the road teams this week, backing three road dogs (Patriots, Eagles and Texans) and one road favorite (Panthers). He also likes the Packers to bounce back as home favorites against the Lions.

Colin’s take: Uncle Colin doubted the Patriots early in the season, but has hopped back on the bandwagon. New England comes in battle tested, having won three games by seven points or less this year. They typically play well as a dog on the road in close games, and have a few assets you may have heard of named Brady and Belichick. Cincinnati, meanwhile, has plenty of playmakers but struggles to get the ball downfield, as illustrated by the 46 ypg receiving AJ Green has put up in his last three games. Take the Pats in a toss-up.

Colin’s take: Carolina comes in well-rested after their bye last week. Cam Newton is playing very well with a 6/2 TD/INT ratio and has been aided by a rushing attack averaging 151 ypg. The Cardinals lack of a running game and injuries up front will bite them this week against a Panthers squad that had 10 sacks and three INT’s through the first three weeks of the season. Colin doesn’t love laying points on the road, but backs the Panthers in this one.

Colin’s take: Philly has had several close losses against teams that are a combined 10-2. The Eagles rank first in the NFL in rushing and second in total offense, averaging 458 ypg. The Giants, on the other hand, are doing nothing well. They’re a mess up front, and their once vaunted pass rush has produced only four sacks. The Eagles have more weapons and have at least produced some positives. Take the Eagles and the points against a Giants team that historically hasn’t been great at home through the years.

Colin’s take: Houston has beaten two solid football teams in Tennessee and San Diego, and led the Seahawks by 17 late in a game they would have won if not for Schaub’s pick-six. The Seahawks loss has the Texans wildly undervalued against a 49ers team that’s struggled on the field and had a number of injuries (Willis, Crabtree, A. Smith). Kaepernick suddenly has no one to throw to outside of Anquan Boldin, and it’s showed. Take the Texans and the points on the road.

Colin’s take: This is a must-win divisional game for the Packers. They enter at 1-2, and should be well-rested coming off the bye week. The Lions defense has been great at generating pressure and turnovers, including four last week against the Bears, but Aaron Rodgers is no Jay Cutler. Until last week, Rodgers had gone 41 straight games with fewer than two INT’s. Green Bay is not as sloppy with the ball as the Bears, and comes in with the best rushing attack they’ve had in years. Lay the points and take the Packers in a must-win.

BookDogger is a sports gaming website that delivers the sports betting experience with a social twist. BookDogger eliminates the risks of real money gambling and delivers legal sports betting competitions that can be enjoyed with friends, similar to fantasy sports. BookDogger’s first free-to-play contest is its’ Leaderboard Contest, where players compete each month for a shot at $500 in cash. BookDogger is based in San Francisco, CA. Connect via Facebook or Twitter.