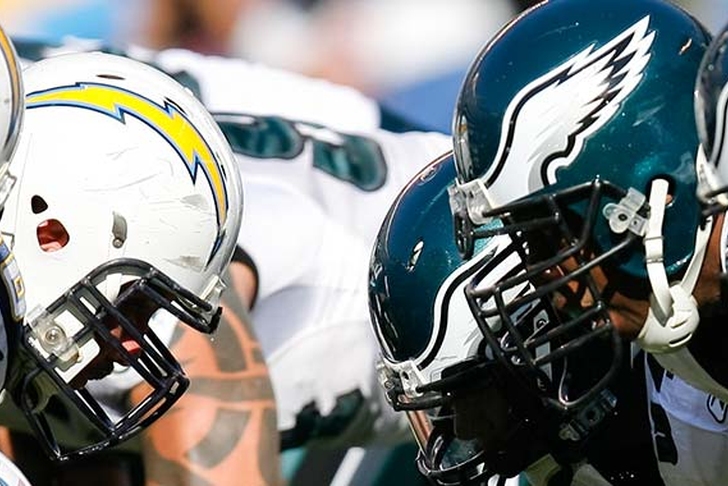 Welcome to the second installment of Breaking the Book, your guide to the upcoming weekend’s football action from a handicapper’s perspective. This season, Chat Sports is proud to welcome handicapper Jason Cellura as a guest columnist. Jason is CEO of BookDogger, a social betting startup, and has vowed to provide Chat Sports readers with his expert insight on the picks he's making each week.

Every Friday, we chat with Jason about the upcoming action and identify his top five plays of the week (pro or college). We’ll also include a rundown on the Blazing 5 picks made by everyone’s favorite talking head, Colin Cowherd, and compare Jason's and Colin's records each week to decide who the true superstar handicapper is.

Last week, our season got off to a rough start with our Cover 5 picks going 1-3-1.

The Good: The Toledo Rockets did what we expected and scored enough to cover our 17-point spread, losing 38-23 at Missouri.

The Bad: We were in it until the end with the Gators, Bengals and Texans. The Bengals had a come-from-ahead push against the Bears. Florida had a remarkable five turnovers, four of which occurred in Miami territory, and they still only lost by five points. The Texans didn’t really wake up until the second half of their game against the Chargers, finishing with a last second FG to ensure we didn’t get the cover.

The Ugly: The Cincinnati Bearcats clearly missed the memo about their game against Illinois. The Bearcats were waxed in a 45-17 rout where our cover was never really in play.

We’re promising to get things back on track this week. On the college side we’re riding Louisville and Iowa on the road in rivalry games against lesser foes. In the NFL, we like the Dolphins and Eagles to build upon their week one wins (and covers) and come out on top again this week. We're also taking the Raiders to build on a strong performance and beat up on the lowly Jacksonville Jaguars.

Louisville is a legitimate BCS contender. Teddy Bridgewater is far and away the best QB in college football, completing 77% of his passes with a TD-INT ratio of 9-1. The Cardinals defense, meanwhile, has shown marked improvement yielding only seven points in each of its first two outings. Kentucky sputtered in a week one loss to scrappy WKU squad, but rebounded with a rout of Miami (Ohio) last week thanks to a big game from QB Max Smith. Excitement is guaranteed to be in the air for this rivalry game. Expect that excitement to keep Kentucky close early before Louisville eventually outclasses them to the tune of a three score victory.

In recent years, this has been one of the most entertaining games on the college football calendar. The last two meetings of these in-state rivals have ended with Iowa State on top by a three-point margin. This year will be different. Iowa (finally) has a healthy rushing attack with Mark Weisman and Damon Bullock combining for nearly 300 yards rushing in the Hawkeyes' first two outings. That bodes poorly for an Iowa State squad that surrendered 228 yards on the ground to FCS foe Northern Iowa in its season-opening 28-20 loss. The Cyclones have had two weeks to prepare for this one, but look for the Hawkeyes to end their two-game skid to Iowa State, coming out on top by a TD.

The Colts had a hard time protecting crown jewel Andrew Luck in last week’s comeback win against the Raiders, allowing four sacks. That doesn’t bode well against a Miami defense that ripped off six sacks last week against the Browns (including 2.5 from Cameron Wake). Ryan Tannehill was also impressive, completing 24 of 38 passes for 272 yards and a touchdown, despite absolutely no help from the run game (23 rushes for 20 yards). This one has all the makings of a back and forth struggle, in which case we find value in the team getting the points.

Both teams are coming off emotional outings on Monday Night Football. The Eagles ran out to a 33-7 lead over the Redskins before taking their foot off the gas and eking out a 33-27 victory. The Chargers, on the other hand, had a come-from-ahead 31-28 loss to the Texans in a game where they led 28-7 in the third quarter. A lot of people are calling for a letdown in this spot for the Eagles - we’re not. Chip Kelly’s offense is legit, and the Chargers are coming east for a 9am PT start. Look for Philly to roll in their home opener.

Oakland stormed back from a 14-0 deficit to the Colts last week to gain a 17-14 advantage before falling late 21-17. Terrelle Pryor, although still a work in progress, ran all over the Colts with 13 carries for 112 yards, and brought enough in the passing game (19-29 217 yards and 1 TD) to keep the Colts honest. The Jaguars, meanwhile, were absolutely crushed by the Chiefs 28-2. That game saw starting QB Blaine Gabbert leave with a nasty hand laceration which means Chad Henne gets the nod this week. The Jags managed only 172 yards of offense in last week’s debacle, and it doesn’t get much better this week as they match up with an Oakland defense that did a solid job of containing a potent Colts attack. Look for the Raiders to win by at least seven and cover the -5.5 spread.

Like Jason, Colin had a rough start to the season with a 1-3-1 record in the opening week. Colin correctly predicted the Titans to cover against the Steelers, but ended up a loser with the Bucs, Browns and Panthers. Colin also had the Bengals in their push against the Bears.

This week Colin gets back to his underdog ways, backing the Cardinals and Giants at home, while also taking the Rams on the road. Colin also likes a couple of big home favorites in the Bears and Eagles.

Colin’s take: Maybe the “tastiest bet of the weekend.” The Lions under Jim Schwartz have lost 10 of their last 13 away matchups and have generally been undisciplined. The Cardinals are as good of a team as the Lions and get the points at home. Arizona has a tough defense and finally has a real QB for a change. Arizona has won 9 of their last 13 at home and plays a Lions team primed for a letdown.

Colin’s take: The Falcons are an up and down team whose defense is not very good. The Rams led the league in sacks last year and match up against an unproven Atlanta offensive line. Jeff Fisher is known for toughening up football teams and St. Louis has quickly taken to his personality. St. Louis is for real and will upset Atlanta 24-23.

Colin’s take: Denver’s offensive line is beat up with their two offensive tackles recovering from offseason surgery and center Dan Koppen out with a torn ACL. Unfortunately, they now get a week two matchup against the ferocious Giants pass rush. The Giants turned it over six times in their season-opening loss to the Cowboys yet were still in it late. Name one person who likes the Giants in this spot? Colin’s taking the Giants in an upset 27-26.

Colin’s take: Christian Ponder is still struggling with turnovers, including four last week. Further, Chicago’s defense limited Adrian Peterson to 51 yards in 2011 and has generally done well against AP. Look for the Vikings big pass rush to be slowed by the Bears screen game. The Bears have real talent and have owned this matchup covering 6 of their last 7. The Bears clobber the Vikings in this spot.

Colin’s take: Chip Kelly’s offensive system is “easy to implement” and relies on players to make plays. The Eagles defense also stepped up last week, limiting the Redskins to 74 rushing yards. San Diego, meanwhile, hasn’t rushed for over 100 yards in nearly half an NFL season. This is a good NFC team matched up against a bad AFC team traveling across the country. Swallow the points and take the Eagles.

BookDogger is a sports gaming website that delivers the sports betting experience with a social twist. BookDogger eliminates the risks of real money gambling and delivers legal sports betting competitions that can be enjoyed with friends, similar to fantasy sports. BookDogger’s first free-to-play contest is its Leaderboard Contest where players compete each month for a shot at $500 in cash. BookDogger is based in San Francisco, CA. Connect via Facebook or Twitter.