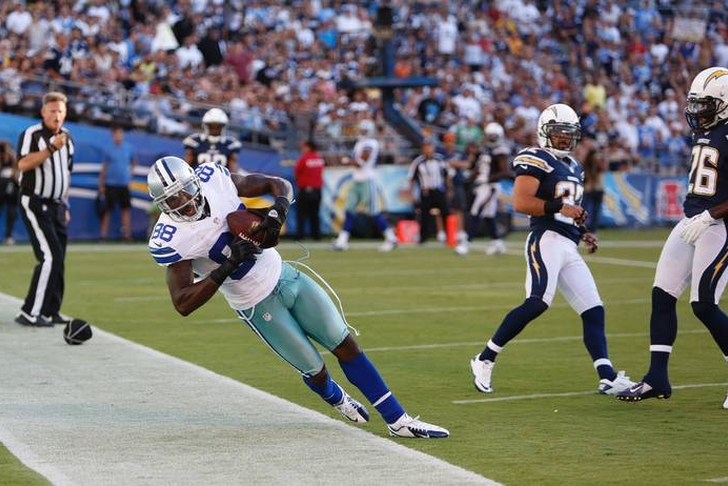 Welcome to Breaking the Book, your guide to the upcoming weekend’s football action from a handicapper’s perspective. This season, Chat Sports is proud to welcome handicapper Jason Cellura as a guest columnist. Jason is CEO of BookDogger, a social betting startup, who has vowed to provide Chat Sports readers with his expert insight on his picks each week.

Every Friday, we chat with Jason about the upcoming action and identify his top five plays of the week (pro or college). We’ll also include a rundown on the Blazing 5 picks made by everyone’s favorite talking head, Colin Cowherd, and compare the record of Jason and Colin each week to decide who the true superstar handicapper is.

After a big 4-1 week, we came back to Earth last week with a 1-4 showing (on the bright side, we haven’t lost you as much money as Colin Cowherd). Let’s take a look at where things went wrong:

The Good: Missouri representing the SEC well in their 45-28 win at Indiana, handily covering our -1 lay.

The Bad: Pitt’s offense looked like something out of EA’s NCAA Football 14, going for 58 points against Duke. Unfortunately for us, the Pitt defense was atrocious and their punter had a case of the dropsies, muffing a snap deep in Pitt territory to allow Duke a late TD to backdoor our -3.5 spread in Pitt’s 58-55 victory. Army (+3) struggled mightily in the red zone against Wake Forest. The Black Knights settled for three FG’s and a safety before Wake pulled away late in a 25-11 contest.

The Ugly: Our Cleveland-bred emotions getting the best of us in our selection of the Vikings (-6) to take down the Browns. Minnesota had a shot to give us the cover in the 4th, but settled for a Blair Walsh FG. Brian Hoyer did his best Bernie Kosar impression, driving the Browns downfield for the decisive TD with a little over two minutes remaining. The Giants (+1) completely imploded in their 38-0 whipping in Carolina…no explanation necessary there.

This week brings the beginning of conference play for a number of college teams across the country. Typically, we like to identify value in home dogs in conference play, but this week we're backing a few home favorites (Bowling Green -14 and Ohio State -6) that are too good to pass up. We also buck our own system with Oklahoma State -18 on the road at conference foe West Virginia. On the NFL side, we like a couple of dogs with Arizona (+2.5) visiting Tampa Bay and the Texans (+2.5) on the receiving end of points at home against the mighty Seattle Seahawks.

After totaling one win in each of the previous three seasons, Terry Bowden has the Zips on the up-and-up. The Zips come into this one 1-3 (2-2 ATS) including close losses in at Michigan and at home against Louisiana-Lafayette (both of which covered the spread) in their last two outings. Close losses aside, Akron is not yet in the same class as Bowling Green. The Falcons, behind first-year starter Matt Johnson, boast a balanced offensive attack, averaging 293 ypg through the air and 218 ypg on the ground (compared to 260 ypg passing and 111 ypg rushing for Akron). BG also has one of the stingiest defenses in the MAC, allowing 372 total ypg, despite allowing over 600 yards in a week three loss at Indiana. Akron’s four-point loss at Michigan and BG’s 42-10 whipping at Indiana a few weeks back has the spread a bit deflated in this one. Lay the points and look for BG to come out on top by a three score margin.

The Cowboys bring their typical high-flying offensive attack into this matchup with Big 12 foe West Virginia. Oklahoma State’s offense is averaging 489 ypg and 45 ppg, spearheaded by starting QB J.W. Walsh, who’s completing over 70% of his passes with a 5-1 TD/INT ratio. West Virginia, meanwhile, has struggled to find any sort of rhythm on offense with Dana Holgorsen’s squad averaging a subpar 394 ypg and 18 ppg. The Mountaineer defense has fared much better, allowing 324 ypg and 19 ppg, but they’ve yet to see an attack as potent as the one Mike Gundy’s team brings to town. The Cowboys have to deal with a noon ET start time, but we believe they’re well-rested and plenty prepared coming off a bye week. Lay the points and look for Oklahoma State to roll big against a WVU team that doesn’t have the firepower to keep up.

Despite averaging over 52 ppg so far this season, the Buckeye offense has yet to have its two brightest stars on the field at the same time. That changes this week with Braxton Miller returning to pair with Carlos Hyde (who was suspended for the first three games of the season) as Ohio State opens B1G play against Wisconsin at the Horseshoe. This one features two of the top rushing teams in the country, with Wisconsin averaging 350 ypg on the ground compared to 313 ypg rushing for Ohio State. The difference resides at the QB position. Ohio State has two stars in Miller and Guiton, while the Badgers field the relatively mediocre Joel Stave. Football guru Phil Steele rates OSU’s home field edge at 5.25 points, indicating that this game is a virtual toss-up were it to be played on a neutral site. In addition, the Buckeyes are 6-2 ATS in B1G play under Urban Meyer, and we're seeing a lot of value in backing Ohio State. Look for the Buckeyes to top the Badgers by 13+ in this matchup of B1G powers.

The Seahawks, along with the Broncos, have clearly shown themselves as the class of the NFL this season. Seattle’s defense is allowing league lows in ypg (242) and ppg (9), while their offense ranks 10th in the NFL with 380 ypg and has displayed nice balance so far. Houston comes in off a 30-9 loss at Baltimore where they allowed both an interception and punt to be returned for TD’s, in addition to recording 14 penalties for a whopping 113 yards. This is a matchup of clear opposites in the eyes of the public, with the Seahawks (3-0 ATS) receiving over 70% of the action against the 0-3 ATS Texans. The Seahawks struggled in their only road trip of the season (a 12-7 win over Carolina). Couple that with a 10 am PT start time, and we find a lot of value in backing the Texans at home.

The Bucs are a team in disarray. They are 0-3 (1-2 ATS) with an offense averaging a measly 282 ypg. It’s gotten so bad that Greg Schiano has announced rookie Mike Glennon will start this week over Josh Freeman. Tampa’s defense has fared better, allowing 344 ypg through three contests including matchups against New Orleans and New England. Arizona comes in off a 31-7 beatdown at the hands of the Saints. The Cardinals are still in search of a consistent rushing attack to take the pressure off of Carson Palmer, who’s had to put the ball in the air nearly 40 times per game thus far. While we don’t like the 10 am PT start for Arizona, we feel like there’s good value in backing a Cardinals team led by a veteran QB and on the receiving end of 2.5 points.

Colin’s rough 2013 season continued last week with his Blazing 5 picks going just 1-3-1, taking his season record to an unimpressive 3-10-2. Colin correctly predicted the Jets covering -2.5 against the Bills, but missed on the Giants (+1), Rams (+4) and Packers (-2.5). Colin was also backdoored by a late Titans TD which resulted in a Chargers (+3) push on the road.

Colin is excited about his picks this week. He feels like he has at least 4 winners up his sleeve, and is so confident that he sang Rush live on the air to celebrate. He’s going heavy on the home teams, backing three home favorites (Falcons, Lions and Saints), and one home dog (Chargers). Colin is also riding the Jets 3-0 ATS start, taking the Jets and the points in their matchup at Tennessee.

Colin’s take: Uncle Colin likes value. The Jets defense is back, leading the league in yards per play. New York is excellent against both the run and pass, and this week matches up against a Titans attack that has struggled to do much of anything. The Titans are the better team and are playing at home, but in this matchup of two ugly offenses, Colin finds a lot of value in a Jets team receiving more than a FG.

Colin’s take: New England is the “worst good team in the league.” The Pats enter allowing a misleading 11 ppg on defense, but their competition has included opposing signal callers named EJ Manuel, Geno Smith and Josh Freeman. This week they play a “big boy QB” in Matt Ryan on the road. Atlanta hasn’t lost consecutive games since 2009. Both teams are dealing with injuries, but the Pats’ are much more critical. The Falcons losses have come on the road against two 3-0 teams. Colin loves Atlanta in a 27-20 game.

Colin’s take: Colin thinks this is the steal of the week. Chicago has struggled in division on the road, losing five of their last seven. The Bears are also a misleading 3-0, having won late against the Vikings and Bengals (both at home). The Lions get Reggie Bush back, they’re terrific in the dome, Calvin Johnson is uncoverable, and this is Detroit’s only home game in a five-week stretch. Add to that the Lions lead the league in 3rd down defense, and Colin swallows the points in a 28-20 Detroit victory.

Colin’s take: Uncle Colin likes the Cowboys, but not as a favorite on the road. Dallas beat a bad St. Louis team last week and enters this contest without Anthony Spencer anchoring their defense. The Chargers have blown a few contests late, but Philip Rivers is back with 800 yards, 8 TD’s and 1 INT season-to-date, despite matching up against two stout defenses (Houston and Tennessee). Colin wasn’t buying the Chargers to start the season, but is now. Take the Chargers and the points in a 28-23 San Diego victory.

Colin’s take: Colin usually doesn’t like to bet on emotionally-charged Monday Night Football games. He’s making an exception here with the Saints. New Orleans has won and covered their last 11 games at home with Sean Payton as coach. Drew Brees has at least 300 yards passing in eight straight games. The Saints defense is for real under Rob Ryan, and many in Vegas believe the Saints are the second best team in the league (after the Seahawks). Miami, meanwhile, has a “pedestrian-at-best offensive line” that has struggled to protect Ryan Tannehill or generate a consistent ground game. Swallow the points and look for the Saints to come out on top 33-23.

BookDogger is a sports gaming website that delivers the sports betting experience with a social twist. BookDogger eliminates the risks of real money gambling and delivers legal sports betting competitions that can be enjoyed with friends, similar to fantasy sports. BookDogger’s first free-to-play contest is its’ Leaderboard Contest, where players compete each month for a shot at $500 in cash. BookDogger is based in San Francisco, CA. Connect via Facebook or Twitter.