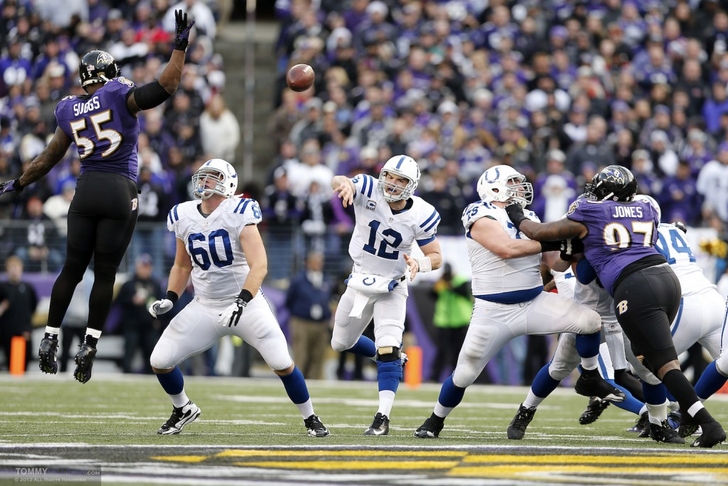 The Indianapolis Colts and Baltimore Ravens were seen as similar teams when the 2014 NFL season began. They were each perceived as pretty good teams, but not quite Super Bowl caliber. Any difference in their expectations for making the playoffs were about the division they were in—Indy in the weak AFC South, Baltimore in the strong AFC North—than about the quality of the teams themselves.

The first four games have mostly validated that. Baltimore has started 3-1, but lost at home to Cincinnati, suggesting the Ravens are a step behind the league’s elite. Indianapolis is 2-2, with close losses to Denver and Philadelphia, suggesting the same about the Colts.

Now the Ravens and Colts go head-to-head in a significant AFC game on Sunday at the RCA Dome in Indianapolis. The Colts are a (-3) favorite, meaning oddsmakers view the teams as essentially even on a neutral field. This game is going to offer plenty to build off of in our NFL handicapping the rest of the way.

The most interesting battle is going to be at the point of attack when Indianapolis has the ball. The Colts’ offensive line is grading out fairly well in our game reviews right now, but there is one significant caveat—the grades were mediocre to below average after Week 2, when the opponents were the Broncos and Eagles. They’ve jumped up to be strong following games with the Jaguars and Titans.

No one doubts Indianapolis can beat the latter two teams, so those performances don’t help us much. We want to see if the Colt offensive front can perform against a front seven of true quality.

And the Raven front seven is nothing if not high quality. Don’t be fooled by low sack totals. This is a unit playing exceptionally well in terms of knowing assignments and making plays. Any 3-4 scheme starts with the linebackers, and the quartet of Terrell Suggs, Elvis Dumervil, C.J. Mosley and Pernell McPhee are playing off the charts, particularly Suggs, the Defensive Player Of The Year in 2010.

The linebackers are being freed up by the sound play of their defensive front, led by Haloti Ngata, and Brandon Williams on the nose.

Here too though, there is a caveat. While there’s more to defensive performance than sacks—a lot more in fact—they still count for something. We need to see this unit really get to the quarterback. Andrew Luck is a hard quarterback to bring down, with his mobility and physical strength. But if the Raven front seven is going to carry them back into the league’s elite, they need to consistently collapse the pocket, make Luck regularly hit the deck and at least record a couple sacks.

The battle between the Indy offensive line to create holes for the running game and time for Luck, against the Baltimore front seven, is going to be the most telling battle for how we handicap these teams moving forward. What else will decide Sunday’s games in particular?

Baltimore’s offense was off to a mostly sluggish start, but got unleashed last week in the 38-10 win over the Carolina Panthers. How much of that was driven by wide receiver Steve Smith’s desire for revenge remains to be seen.

Las Vegas does not hold the Raven offense in high esteem—the Over/Under on this team’s games has ranged from 42.5 to 44 through the first four weeks (you can use 45 as a general median point in assessing how the market sees things). Even with that low threshold, Baltimore went Under twice and barely went Over once, before finally going decisively Over against Carolina. Some of that has to do with the quality of the Raven defense. But not all of it.

Indianapolis is the reverse—they’ve faced high totals in each of the first four games—45.5 to 53.5—and gone Over each and every time. Andrew Luck has good chemistry with Reggie Wayne on the possession routes and T.Y. Hilton on the deep ball. We’d like to see Hakeem Nicks get more consistent separation as a third option.

The total on this game is 49—a combination of the Raven offense getting untracked last week and the game being played in the pass-friendly atmosphere of the RCA Dome.

With two good quarterbacks playing, the difference might well be which running back—Justin Forsett for Baltimore or Ahmad Bradshaw for Indianapolis—can get some traction and buy his QB some extra breathing room.

I can’t tell you who I’m picking in this game—or if I plan to bet it at all. That information is for clients. But I hope the outline provided will give you a good idea of what to look for, not just on Sunday, but moving forward with your NFL handicapping.

Jim Hurley has been a successful public handicapper since 1985, when he founded the Jim Hurley Network. Hurley brings a team approach to handicapping, consulting with statistical analysts, personnel experts and Vegas insiders to narrow the NFL and college cards down to the most bettable games each and every week. Visit him online at www.jimhurley.com