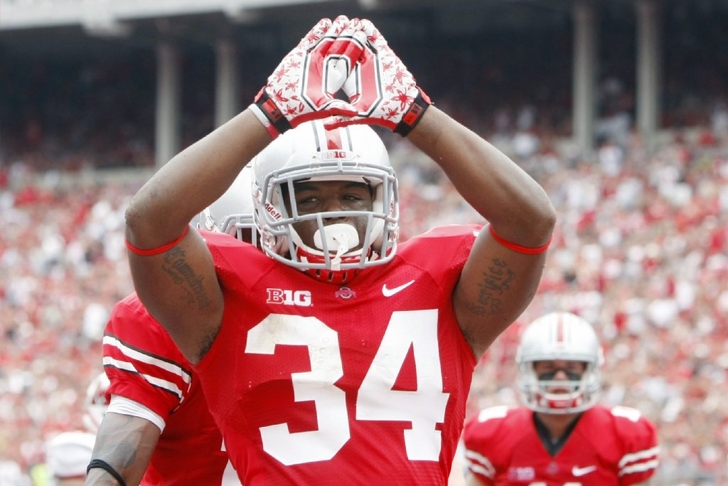 Hyde is a throwback to the days of three yards and a cloud of dust. He’s a north-south runner who does a great job of keeping his legs churning. He’ll break most arm tackles and has good but not great vision. He also has great balance, as shown by the gif below.

He has a sneaky juke move that was effective against the Big Ten. Hyde isn't overly fast, but he is quick enough. He’ll never lose yards because he’s dancing around in the backfield. If you need someone to pick up yards on third and short, Hyde is your man.

His hands are average. He has a bad tendency to trap the ball against his body when catching it, instead of truly using his hands. However, he did get better as the year went on. I’m not convinced he has the ability to be a true three-down back. He has a habit of not putting two hands on the ball when in traffic when trying to break tackles. That should be easily correctable though. Hyde is raw as a pass blocker, which makes sense given that Ohio State was a run-first offense. He was blown up against Penn State, as you can see below (jump to the 1:23 mark). He needs a lot of work in pass protection.

My biggest issue with Hyde is that he lacks breakaway speed. Sure, he can outrun the Illinois Fighting Illini, but can he outrun the Chicago Bears? I don’t think so, and that’s going to hurt him. His spin move is a slow one, designed to break arm tackles, not actually make people whiff.

Hyde might be a tad slower the Richardson, but he is better at breaking tackles. Both players are two-down backs who need a mauling offensive line to open up holes.

Tennessee Titans, Jacksonville Jaguars, New York Giants, Oakland Raiders, Cleveland Browns and New York Jets. All these teams could use a running back and could take Hyde on Day 2.

Expected Range: Second or third round

I’ve seen mocks that have Hyde in the first round, but that doesn’t make sense to me. The trend in the NFL is to use multiple running backs—a bruiser and a dynamic playmaker. Hyde is the former and those are easier to find. I don’t have a first round grade on him and I don’t see any team spending a high pick on him. I want my running backs to be in the mold of Giovanni Bernard, something Hyde is certainly not. Hyde is not a plodder, but he’s a bulldozer that’s going to get you positive yardage every play. Just don’t hold your breath in anticipation of a big run. He’s a two-down back, not a three-down back. Expect to hear “Hyde straight up the middle, breaks a tackle and for a gain or three, maybe four,” a lot during NFL broadcasts. Hyde should be a mid-to-late second round or early third round pick.