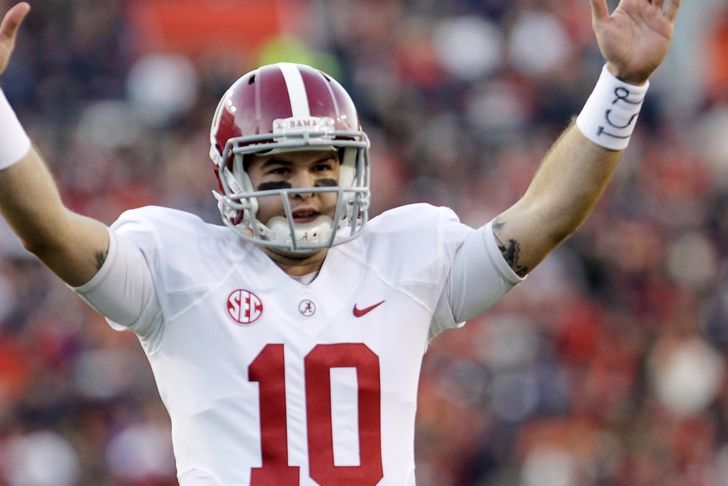 AJ McCarron is the owner of a 36-4 overall record at the collegiate level as a starting quarterback. Under his control, the Crimson Tide also won two BCS National Championships. McCarron was the starting quarterback and leader of the nation's most successful college football program for the past three seasons. He brings a winning mentality and a steadiness to the NFL that many teams would like to add to their organization.

Proven winner: The story is out on McCarron, a game manager who does just enough to win. Last time I checked winning is the most important thing in the NFL and all of sports. I'm convinced McCarron can win at the next level for the following reasons.

Pro-Ready: He has ran a pro-style offense during his collegiate career and has the intelligence to pick up any NFL playbook. At Alabama he was given more freedom as his career progressed to call pre-snap audibles at the line of scrimmage and would more often than not make the right adjustment.

Arm Strength: Many question his arm strength and they do have a reason for it, McCarron is known to not be able to throw the deep ball. This became evident in this year's Sugar Bowl when they took on the Sooners of Okalahoma. McCarron constantly had opportunities to hit his guys deep down the field and just couldn't put the ball in the right spot. As I said before he can make a number of NFL throws but when you ask him to hit a guy in stride 35-40 yards down the field, that's where you start to see the weaknesses.

Pocket Mobility: For most of his career, McCarron has been able to drop back and enjoy good protection. It's when the pocket collapses that he starts to display a quick trigger to throw it away or inaccurately to his receivers. This is something that can be coached but also has a great deal of mental perseverance to get past.

Arizona Cardinals: The Cardinals currently have Carson Palmer under center with only Drew Stanton and Ryan Lindley behind him. McCarron will have a year or two, barring injury, to learn from coaches and a solid veteran quarterback before being asked to be the starter.

New England Patriots: Yes, Ryan Mallett is still there behind the golden boy Tom Brady, but many believe; including myself, that Ryan Mallett may get some pretty good free-agency offers next off-season as his rookie contract is set to expire after this year. So bringing in a guy like McCarron could be in the card for the Patriots in this draft.

Other teams to consider: St. Louis Rams, Baltimore Ravens, Detroit Lions could all look at him in the third round or later, if he falls.

The former Crimson Tide quarterback is expected to go anywhere between the second-fourth round. But then again, so was E.J. Manuel.