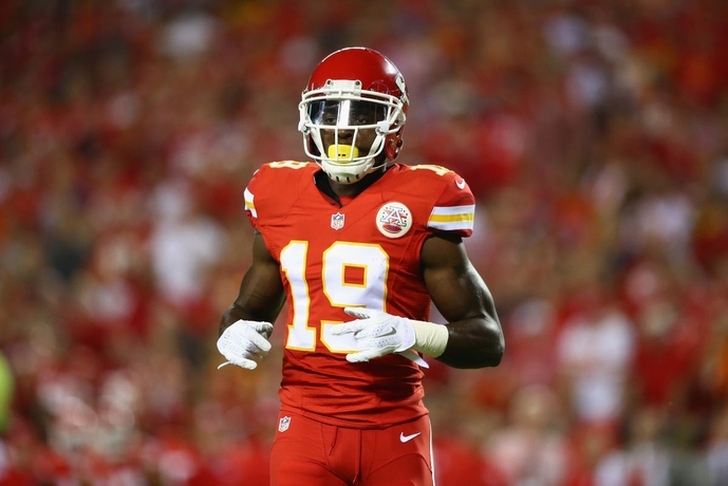 In a surprise move, the Kansas City Chiefs cut WR Jeremy Maclin on Friday. The Chiefs save $10 million in cap space, but are now hurting at wide receiver. As for Maclin, he now easily becomes the most coveted player on the NFL free agent market. He'll have plenty of interest and it shouldn't take too long for him to find a landing spot.

Nearly every team will have at least some level of interest in Maclin, since he'd be at least the No. 3 for nearly every team in the NFL, but roster construction and cap space will help narrow down the field. Plus, Maclin surely wants to find a place where he can get a solid number of targets. That also rules out several teams and we've tried to focus on the five most likely targets. That means several potential teams (like 49ers, Rams, Browns, etc) missed out. With that in mind, here are seven teams that could sign WR Jeremy Maclin after the Chiefs cut him.

7. Philadelphia Eagles
Could Maclin return back to Philadelphia? Perhaps, but it's a bit of a longshot. The Eagles added a bunch of WRs this offseason: Alshon Jeffery, Torrey Smith and rookies Mack Hollins and Shelton Gibson. And with holdovers Jordan Matthews, Nelson Agholor (whose contract makes it tough to cut) and Dorial Green-Beckham (who is already a cut candidate), it makes it tough for the Eagles to add Maclin. Still, Doug Pederson knows Maclin well and perhaps adding Maclin would allow the Eagles to trade Matthews or get someone to take Agholor. The connection is one worth mentioning, but it would be trickier than you think for the Eagles to land Maclin.

6. Seattle Seahawks
The Seahawks don't exactly lack WRs on the roster right now. They have Doug Baldwin and promising (if injury-prone) youngsters in Tyler Lockett and Paul Richardson. They also drafted Amara Darboh in the third round last year and have Jermaine Kearse. But Seahawks fans would swap Kearse (a potential roster cut already) for Maclin in a heart-beat. I think the chances are relatively low of this move happening, but if Maclin wants to win and play for an established QB right now, this is one of his best landing spots.

5. Carolina Panthers
The Panthers are seemingly always connected to the big-name WRs on the open market. The did draft Christian McCaffrey and Curtis Samuel this offseason, both of whom will see time in the slot. But the outside options are Kelvin Benjamin (who has weight issues again), Devin Funchess (who can't make a steady impact), Russell Sheppard (special teams ability got him signed) and Charles Johnson (meh). So if the Panthers can land Maclin, they should explore the option.

4. Buffalo Bills
The Bills have Sammy Watkins, Zay Jones and not a whole lot else outside of maybe Andre Holmes at WR. While the Bills will be a run-focused team this year, another option at WR would be ideal. Maclin, Watkins and Jones would actually form one of the better WR corps in the AFC. But would Maclin want to go to a team where he's not going to get a ton of targets? Buffalo doesn't have a ton of cap space, but they have enough to add Maclin.

3. Tennessee Titans
The Titans already added Corey Davis and Taywan Taylor in the NFL Draft and getting Maclin would be one hell of a overhaul. Maclin could help mentor the young WRs on the roster in Davis, Taylor and Tajae Sharpe. He'd be at least the No. 2 WR and would provide Marcus Mariota with a needed reliable option. The fit makes sense, if the Titans have interest.

2. Detroit Lions
The Lions haven't replaced Anquan Boldin yet (rookie Kenny Golladay doesn't count) and Maclin could fill that hole. A top three grouping of Maclin, Marvin Jones and Golden Tate is a strong one for QB Matt Stafford. Given that the Lions have had issues in recent years running the ball, there should be enough targets to keep Maclin happy.

1. Baltimore Ravens
This makes almost too much sense. The Ravens have Breshad Perriman and Mike Wallace (both deep threats) and nothing else at WR. Adding Maclin would give the Ravens a badly needed No. 1 WR who can operate all over the field. It's a perfect fit and S Tony Jefferson is already tweeting at Maclin. There's one major issues with Maclin and Baltimore: the Ravens have almost no cap space. But if the Ravens really want Maclin, they can find a way to afford him (cut injured Dennis Pitta, restructure some deals, etc). And with the state of their WRs corps, they need to.