The 7 Biggest Risers And Fallers Before The 2017 NFL Draft 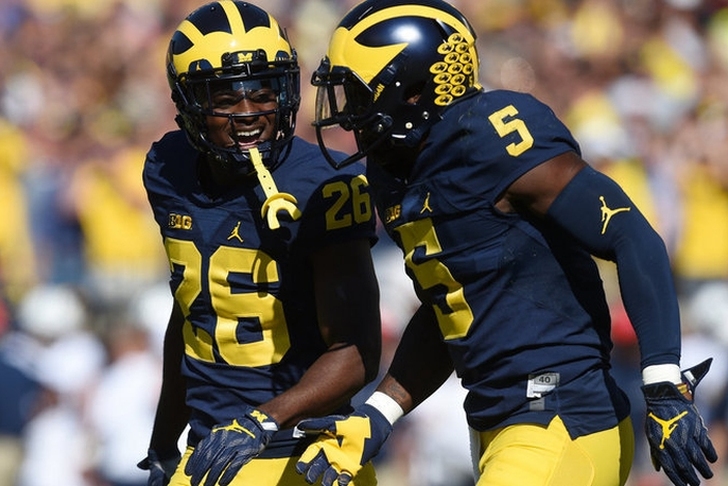 The 2017 NFL Draft is just a few weeks away and several players have seen their draft stock change drastically since the end of the college football season. For some, their stock has increased and they'll end up going earlier than originally thought (and get more money in the process). For others, they're trended the wrong direction.

Not every riser or faller is listed below, but there are some of the more notable ones. Of course, there are bound to be a few surprises during the actual draft. After all, no one saw Laremy Tunsil's bong video coming and most thought Andrew Billings would at least be a round two pick. With that in mind, here are seven of the biggest risers and fallers before the NFL Draft.

QB Patrick Mahomes, Texas Tech
Mahomes is going to be a polarizing selection when he's picked in the first round of the NFL Draft. And it'll be a major topic of debate when he's picked in the Top 13 like I think he will. That's a big rise from the Day 2 selection he was generally considered as when he declared. The upside is there and Mahomes has perhaps the highest ceiling in this year's class. But he needs at least one year, potentially two, to develop. There isn't a bigger boom-or-bust prospect this year.

RB Christian McCaffrey, Stanford
It sounds like McCaffrey will end up as a Top 10 pick, with the Panthers a likely landing spot. Worst case, I think he goes in the Top 20. That's a nice rise for a player some weren't projecting as a first round selection in earlier mock drafts.

RB Joe Mixon, Oklahoma
When Mixon declared, the question was where he would end up being drafted, if at all. The answer is that Mixon will be at least a second rounder. That's a high pick to spend on a player with video of him breaking a woman's jaw, but Mixon's stock hasn't been as affected as it could have been.

DE Jordan Willis, Kansas State
The concern around Willis coming out of Kansas State was that he didn't have great bend and didn't look like a great athlete. There's a disconnect now, because Willis tested as well as anyone at the NFL Combine. I expect him to go during round two, a nice rise from a player who could have fallen to Day 3 if he tested poorly.

LB Haason Reddick, Temple
No one has risen higher this year than Reddick. A college edge rusher, Reddick switched to linebacker at the Senior Bowl and thrived. Then, he blew up the Combine as the top tester at the position. He's a likely first round pick and could go as early as the Top 15. That's a massive rise for a player who wasn't on the general media radar for Day 2 picks after the season ended.

S Obi Melifonwu, UConn
Behind only Reddick is Melifonwu. A potential first round pick, Melifonwu ended up having a combine line former UConn Huskie Byron Jones did. I think he's a strong safety in the NFL, but he's versatile enough that teams could look at him as a corner, free safety or even linebacker in certain packages.

S Josh Jones, N.C. State
Jones is Melifonwu-lite. If a team that wants Melifonwu misses out on him, they can get Jones at some point on Day 2. After blowing up the Combine, Jones has gone from a likely Day 3 pick to a player who should go on Day 2.

RB Dalvin Cook, Florida State
I've still got a first round grade on Cook, but there is a lot of buzz about him not going in the first round. There was a point where some mock drafts had him above Leonard Fournette (which I never bought), but now there's a real chance Cook ends up falling out the first round entirely. The reasons for Cook's potential fall are worries about a shoulder injury, fumbling problems and a litany of off-the-field problems. He's never been found guilty of a crime, but he was acquitted of a misdemeanor battery charge in 2015, cited for an animal care violation in 2014 and charged with robbery. The robbery charge was later dropped, but Cook also had run-ins with allegedly causing property damage with a BB gun and firing a weapon on school property. There's a lot of smoke here with Cook and although it won't dock him on my board, it could in the eyes of NFL teams.

DT Malik McDowell, Michigan State
McDowell has top 15 talent. But his major attitude and work ethic concerns will drop him to round two. The talent is there, but McDowell said he wasn't coachable at Michigan State. NFL teams won't appreciate that and it will cause McDowell to go lower than his talent says he could. There have been Connor Cook comparisons made.

EDGE Tim Williams, Alabama
Much like several players on this list, there are off-the-field issues around Tim Williams. He admitted to several failed drug tests at Alabama, which will scare several teams away. The fear is that Williams will end up as another Randy Gregory. One of the better pure pass rushers this year, Williams will likely fall from a potential Top 20 pick to a round 2 selection. Honorable mention to Alabama DT Jonathan Allen, who could end up as a mid-first rounder.

CB Sidney Jones, Washington
This one is just unfortunate. Jones suffered a torn Achilles at his pro day, which could end up dropping him out of the first round. Jones says he'll be able to play this year, which indicates it's only a partial tear, but he'll be playing catchup either way as a rookie. There's still a chance he goes in the first round, but I think a round two pick makes more sense. If he can't play at all next year, second round is the best case. On the flip side, Washington's Kevin King has really helped his stock with some impressive combine measurements.

CB Teez Tabor, Florida
I remain a big Tabor fan (love his ball skills), but his Combine and Pro Day efforts have really hurt his draft stock. First, Tabor ran a 4.62 40-yard dash at the Combine, which was one of the worst at his position. Then he followed that up with an even worse 4.72 40 at his pro day. That's terrible speed for a corner and it causes major concerns about Tabor. Instead of being a potential first rounder, Tabor is looking like a Day 2 pick.

CB Jourdan Lewis, Michigan
In terms of talent and college production, Lewis is one of the better corners. But his size was likely going to limit him to being a nickel corner only and that made him a Round 2 pick. Now Lewis' stock has suffered a major hit because of a domestic violence charge. That will remove him from consideration of several NFL teams and the rest will be very cautious since the situation likely won't be resolved before the draft. NFL teams hate uncertainty in these scenarios and it might be enough to drop Lewis down to Day 3.

S Jabrill Peppers, Michigan
Peppers has fallen from a potential top 10 pick to the late first round. Unlike most cases, it doesn't have anything to do with his testing or off-the-field issues. Instead, the hype (Heisman contender) got a bit out of control with Peppers and teams have major concerns about his coverage ability. Right now, Peppers is a highly-athletic safety prospects who needs work in coverage and learning how to actually be a safety. I think someone will pull the trigger in Round 1 on Peppers, but it won't be in the Top 10.