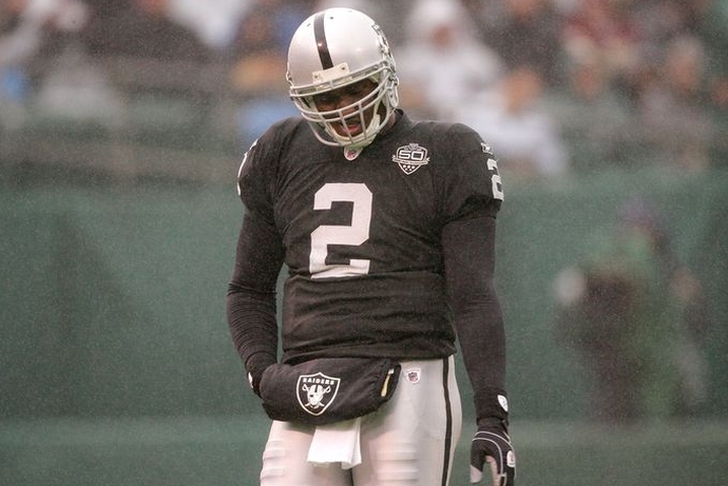 The NFL Draft is an inexact science. NFL greats like Tom Brady are sixth round picks and colossal busts like Ryan Leaf are taken second overall. Ultimately, the NFL Draft is a game of chance. Finding a great QB in the third round is much less likely to happen than finding one in the first round. The first overall pick is supposed to have the best chance of succeeding in the NFL. Unfortunately, that doesn't always happen. Here are the six worst No. 1 overall picks in the NFL Draft since 1990.

It's not your fault, David. Carr never stood a chance after being selected by the expansion Houston Texans in 2002. He had a terrible offseason line and few weapons. He was sacked at least 40 times every season in which he played all 16 games. Had Carr been taken a year earlier or year later, he could have been a very good starting QB. Instead, he had to settle for carving out a career as a backup after the Texans let him go.

The Bengals traded up for Ki-Jana Carter in the 1995 NFL Draft, a move they would regret. Carter could never stay healthy in the NFL and never got a chance to show how talented he really was. On his third carry in his first preseason game, Carter blew out his knee and was never the same player. He also suffered season-ending injuries in 1997, 1998 and 1999. Had he stayed healthy, Carter probably would have looked like current Bengal Jeremy Hill.

Brown showed promise during his rookie season after the Browns took him in the 2000 NFL Draft, recording 69 tackles and 4.5 sacks. He had 4.5 sacks through five games his second season, but then caught the injury bug. Brown never played a full season again and only lasted four more years in the NFL.

The expansion Cleveland Browns took Couch in the 1999 NFL Draft. Couch was the first in a long, and still continuing, line of QBs that haven't worked out for the Browns. Like Carr, Couch didn't have much support in Cleveland. Couch played in the Air Raid offense at Kentucky and never truly adapted to the pro style that populated the NFL. The Browns moved on from Couch when he was just 26 and he never played in the NFL again.

He was supposed to be what Ndamukong Suh is today. That's who the Colts thought they had when they took Emtman in 1992. But, like several players on this list, he just could not stay healthy. Emtman lasted only six seasons in the league, missing almost half of his games because of injuries. He managed just eight sacks in his career.

Expect anyone else? Russell is the clear choice and for good reason. He lasted just three seasons in the NFL after the Raiders took him in 2007. Everything that could have gone wrong with Russell did. He ballooned up to 300 pounds before getting cut. His effort was so bad that even Russell's life coach fired him. He tested positive for codeine in 2007, claimed he didn't have a drug problem and had been clean for three years despite being arrested a month earlier for possession of codeine. Russell was a disaster in the NFL, which shows how badly teams can miss. Almost everyone expected big things from Russell.