6 NFL Coaches Who Are Expected To Be Fired 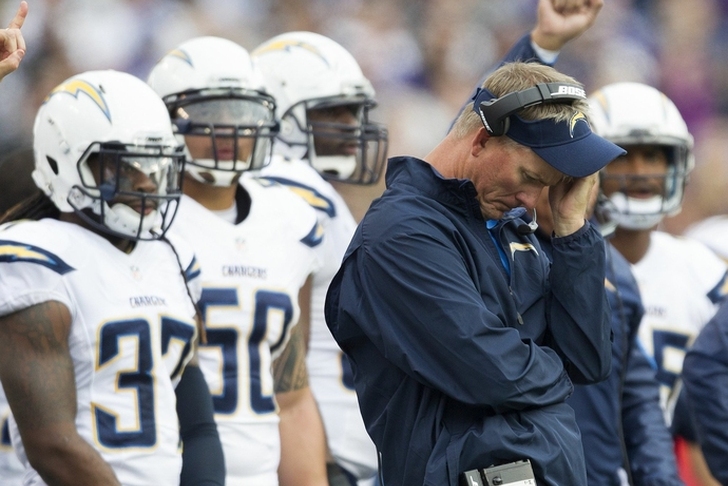 Two NFL coaches have already been fired this season with the Los Angeles Rams parting ways with Jeff Fisher and the Jacksonville Jaguars relieving Gus Bradley, kicking off the coaching carousel a little bit early. However, those won't be the only casualties, as several other head coaches around the league are expected to be fired once the season ends next weekend. Here are the six NFL head coaches who are the most likely to be fired:

Pagano shockingly got a four-year extension last offseason when it looked like he was going to be fired, but that doesn't mean his job is secure. With Andrew Luck under center, this team expects to win the lackluster AFC South and make the playoffs each and every season - and now they're missing out for the second straight year. Even though owner Jim Irsay said he doesn't anticipate making any changes, he didn't rule out firing Pagano.

Lewis is somehow the second-longest tenured coach in the NFL despite not winning a single playoff game in Cincinnati. There have been rumors about his ousting at the end of each of the last two seasons, but survived both times. That won't be the case this year, and with the Bengals currently sitting with a 5-9-1 record, his future is looking bleak. Lewis' time in Cincy has simply run its course.

The Bears looked like they were progressing in John Fox's first season, finishing with a 6-10 mark, but they have taken a giant step back this year. Currently sitting at 3-12, they seem to be in line for a top five pick - and need upgrades at virtually every position.

Bowles is just in his second season as New York's head coach, and you'd think after a 10-6 mark last year, his job would be relatively safe. Well, a 4-11 record for a team with playoff aspirations will certainly undermine that. The team has looked flat for the past month and players have quit during games. This team may be better off looking in another direction.

Bills owner Terry Pegula made it very clear to Ryan before the season started - make the playoffs, or you're gone. Now that Buffalo has officially been eliminated from playoff contention, it looks like it's time for Ryan to start packing his bags.

McCoy may have gotten pass due to the abundance of injuries San Diego has suffered over the past two years, but a loss to the winless Browns on Saturday all but sealed his fate. He has gone just 9-22 since the start of the 2015 season, and the front office might feel they've taken a step back beyond the injuries - a feeling that was reinforced by the Cleveland loss.