5 Teams That Could Trade For RGIII 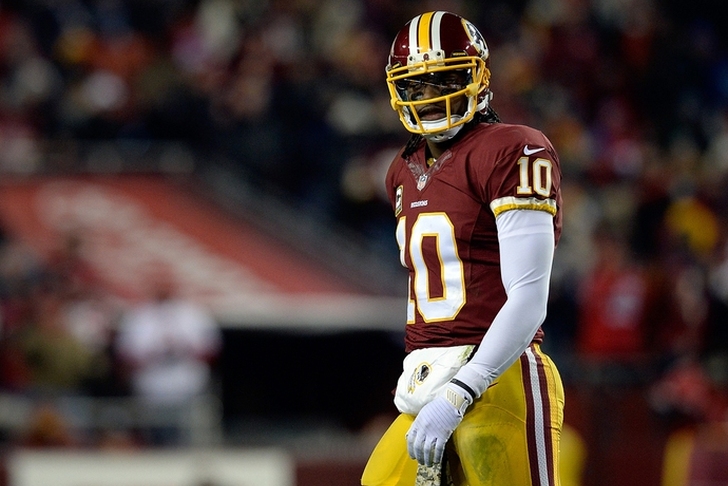 It's becoming increasingly unlikely that Robert Griffin III will start for the Washington Redskins this season. He looks nothing like the QB that took the NFL by storm in his rookie year. It's not even totally his fault. According to reports, Washington football officials want to move on from RGIII, but owner Dan Snyder is blocking the move. It's classic Redskins. Moving on is the best option for Washington and Griffin. Washington needs to restart its QB search and Griffin desperately needs a change of scenery. RGIII's value is at its lowest point, but the Redskins might be able to make a trade with a few teams. Here are five NFL teams tha could trade for RGIII

Josh McCown isn't the answer. Neither is Johnny Manziel. The Browns could start McCown for a few games while RGIII learns the offense. A Manziel-for-RGIII trade would break the internet, although that's unlikely to happen. Griffin's value might not be that high.

Going to New York would not be ideal for RGIII. But, the Jets do need a QB since Ryan Fitzpatrick is a stop-gap solution, Geno Smith is Geno Smith and Bryce Petty is years away from contributing.

Tebow-for-RGIII. It'll never happen, but imagine the reaction. Talking heads would stammer uncontrollably for hours and Twitter would implode. RGIII would actually be a scary fit in Chip Kelly's offense.

Somehow, Rex Ryan and RGIII seem like a fun match. RGIII should fit in Greg Roman's offense, although the Bills already have three QBs in Matt Cassel, E.J. Manuel and Tyrod Taylor. Perhaps a Manuel-for-Griffin trade could work.

There isn't a better place for RGIII to turn around his career than Houston. He'd get to go back to Texas and play for a QB guru in Bill O'Brien. Current starter Brian Hoyer isn't the long-term answer. Ryan Mallett doesn't appear to be anything special either. Trading for Griffin wouldn't cost the Texans much and it would be a good spot for RGIII to save his career, if he still can.