5 Teams That Tony Romo Could Play For Next Season 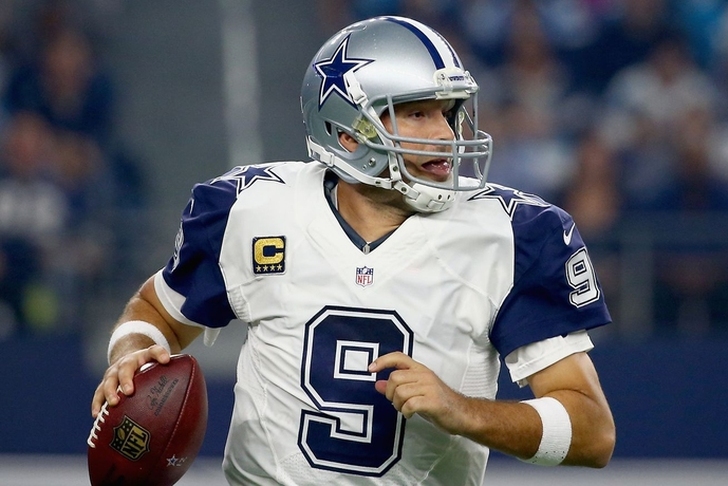 With the emergence of Dak Prescott as the starting quarterback of the Dallas Cowboys, it's clear that Tony Romo's time with the team is nearing a conclusion. In his press conference on Tuesday, Romo admitted as much, saying that the Cowboys are Prescott's team now. So, as Romo looks elsewhere to continue his career as a stater in 2017, here are the five teams he is the most likely to play for:

5) Miami Dolphins
How does playing on South Beach to close your career sound? Many think the Dolphins are not thrilled with Ryan Tannehill, and with their focus on winning now, Romo makes a lot of sense as a veteran who can step in and produce immediately. Miami isn't exactly a contender, but they could be a playoff team with solid play under center. Considering the low level of QB play the Dolphins have seen since Dan Marino retired, it wouldn't exactly be a high-pressure place to play, either.

4) San Francisco 49ers
San Francisco's future quarterback is not on their roster, and they're in position to draft a quarterback high in this draft. They could acquire Romo to be the starter for a year or two while they help get that draft pick ready, or the move could allow them to address some of their many other needs in hopes of rebuilding the roster. They're not a contender, but San Francisco does provide Romo with a chance to play of another one of the NFL's marquee franchises.

3) Chicago Bears
The Bears have made it clear that they plan on moving on from Jay Cutler at the end of the season, and like the 49ers, are also in position to draft a quarterback high. However, with no clear future starters in the draft - and with the possibility of Cutler playing them out of having a top five pick - Chicago could very easily opt to pursue Romo, an Ilinois native. Though they're not a playoff contender this year, they do have a solid roster and young, promising wideouts in Alshon Jeffery and Kevin White.

2) Denver Broncos
It's looking more and more like the Broncos don't want to stick with Trevor Siemian past this year, and if they determine Paxton Lynch needs another year or two of seasoning, Romo would be the perfect short-term solution. He'd play for a championship contender and wouldn't be asked to carry a team. Plus, he'd have dynamic weapons in Demaryius Thomas and Emmanuel Sanders. Denver proved they could win a Super Bowl with this situation with Peyton Manning...could they do it again with Romo?

1) New York Jets
Ryan Fitzpatrick is a short-term option and has not been very good this year (at all), and he's not the QB to lead the Jets for years to come. Geno Smith certainly isn't the answer, and Bryce Petty and Christian Hackenberg both have a ways to go before they can contribute and Chan Gailey, their offensive coordinator, prefers a mobile quarterback. With a need at the position and a playoff-caliber roster - plus the chance to play in New York - the Jets are the team that makes the most sense for Romo to go to.