5 Teams That Teddy Bridgewater Could Play For Next Season 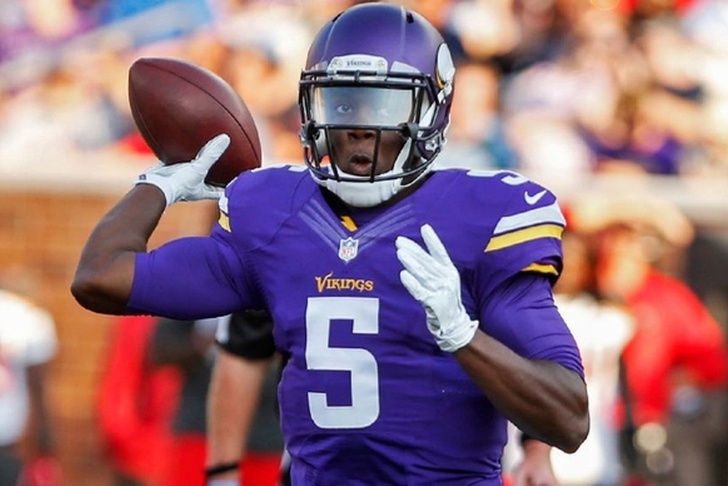 Sam Bradford has taken over at starting quarterback of the Minnesota Vikings after Teddy Bridgewater suffered a devastating knee injury, and if Bradford continues to play at a high level, they may decide to go with him as their franchise quarterback. If that's the case, they could be looking to get rid of Bridgewater. If that happens, where could Bridgewater end up? Here are the five teams that would be the most likely to acquire him:

5) Houston Texans
Brock Osweiler has been very...um...inconsistent as Houston's quarterback this season, which could cause them to look in another direction this offseason - or least bring someone else in for competition. Head coach Bill O'Brien is a quarterback guru, and it's impressive that he has gotten the Texans as far as he has given his crop of quarterbacks. Bridgewater could continue to grow with their young core, and has already proven to be a quality NFL quarterback when healthy. Of course, Houston may be unwilling to call the Osweiler era a failure so early, which is why the rank just 5th on the list.

4) Cleveland Browns
I'm sure we don't need to tell you how much Cleveland needs a quarterback. Robert Griffin III got hurt in his first game in Cleveland, Josh McCown (who also can't stay healthy) will be 38 years old next season, and Cody Kessler is not this team's long-term answer at quarterback. The Browns are expected to take a quarterback in this draft since they're projected to have a high pick, but Bridgewater is another option for them if they don't like any of the quarterbacks in the draft.

3) New York Jets
Ryan Fitzpatrick is a short-term option and has not been very good this year (at all), and he's not the QB to lead the Jets for years to come. Geno Smith certainly isn't the answer, and Romo would be a major upgrade over Smith. Bryce Petty and Christian Hackenberg both have a ways to go before they can contribute and Chan Gailey, their offensive coordinator, prefers a mobile quarterback. With a need at the position and a playoff-caliber roster - plus the chance to play in New York - the Jets make a lot of sense.

2) San Francisco 49ers
San Francisco's future quarterback is not on their roster, and like the Browns, they're in position to draft a quarterback high in this draft. They have a young roster and are rebuilding, meaning they could mold the offense around Bridgewater as he continues to develop. This might be the biggest opportunity for growth for Bridgewater.

1) Miami Dolphins
Many expect the Dolphins to move on from Ryan Tannehill at the end of the season, and Bridgewater (a Miami native) would be a huge upgrade at the position. Miami isn't exactly a contender, but they could be a playoff team with solid play under center. Considering the low level of QB play the Dolphins have seen since Dan Marino retired, it wouldn't exactly be a high-pressure place to play, either.