5 Teams Mark Sanchez Could Play For This Season 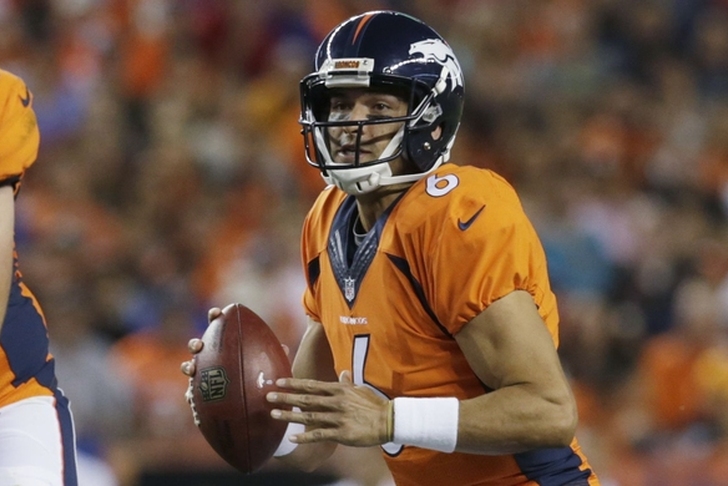 The Denver Broncos are expected to either trade or cut Mark Sanchez after he lost the starting quarterback job to Trevor Siemian this preseason, meaning he'll be playing somewhere else this year. Teams are unlikely to trade for him - although it could happen - so which teams would be interested in signing him as a free agent? Here's our top 5 list:

5) Chicago Bears
Brian Hoyer is Chicago's only backup with playing experience, and judging by his performance with the Texans last year, he's not someone you can rely on under center. That's not to say Sanchez is that guy (or else he'd still be in Denver), but he has been much more successful than Hoyer. Even if Chicago wants to keep Hoyer, Cutler is someone who has been very injury prone in his career, so Sanchez would give them even more insurance.

4) New England Patriots
This would be more of a short-term solution for the Patriots, as they're set to start the season with rookie Jacoby Brissett backing up first-time starter Jimmy Garoppolo during Tom Brady's four-game suspension. There's the obvious concern of Sanchez not having a lot of time to earn the playbook, but Sanchez would simply be an insurance option.

3) San Francisco 49ers
The 49ers are expected to cut Colin Kaepernick (due to his poor performance on the field, not his national anthem stance) to save money, and though they've added Christian Ponder, Sanchez has had much more success in the NFL - and has played in Chip Kelly's system before with the Eagles.

2) Buffalo Bills
Sanchez made two straight AFC Championship Games with the New York Jets under current Bills head coach Rex Ryan, and Buffalo has a big question mark behind Tyrod Taylor. E.J. Manuel has proven he isn't a reliable player, and rookie Cardale Jones needs a few years of seasoning before he'll be ready to play. Sanchez wouldn't be anything more than a stopgap as a backup, but he'd be an upgrade.

1) Dallas Cowboys
The Cowboys are looking to add a quarterback to back up Dak Prescott with both Tony Romo and Kellen Moore being hurt, making Sanchez the perfect for them...and they're already looking at him.

Dallas #Cowboys one of the teams Denver is talking to about Mark Sanchez. Dallas knows he'll be cut, unlikely to trade for him.

He would just be the best of a bad situation for the Cowboys, but he's an experienced veteran who can provide somewhat of a stable presence behind Prescott while Romo is out.