5 Teams That Could Trade For Seahawks CB Richard Sherman 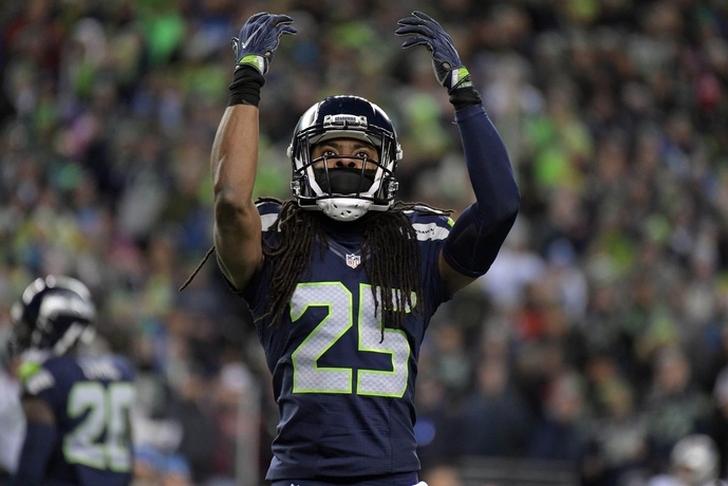 It turns out the rumors of the Seattle Seahawks listening to trade offers for CB Richard Sherman were real. That doesn't mean a trade will happen, as every NFL GM listens to offers that come his way. But the Seahawks are indeed open to moving Sherman for the right price, which means we need to look at some potential landing spots. One of the main reasons the Seahawks are listening to offers for Sherman is cap space. Seattle is slated to have only $33 million or so in cap space, with players like Jimmy Graham, Kam Chancellor, DeShawn Shead, Paul Richardson and Justin Britt set to hit free agency.

The asking price for Sherman is likely similar to what we saw with the Bucs and Darrelle Revis: Tampa gave up a 1st round pick (No. 13 overall) and a conditional 4th rounder. The Seahawks could take a little bit less in terms of value, but they won't give away Sherman for nothing, since they'd also need to spend a high pick on a replacement corner. With two years left on his deal with base salaries around $11 million, the team that adds Sherman would also need to have the cap space to afford his salary. That eliminates the Philadelphia Eagles (under $7 million in cap space) as a potential trade partner if a deal is going to happen before the NFL Draft.

The teams below are in no particular order, outside of the honorable mention at the start. With that in mind, here are five teams that could trade for Seahawks CB Richard Sherman.

Honorable Mention: New England Patriots
There's a report that the Patriots are opening to adding Sherman if they lose Malcolm Butler. That makes sense from the Patriots perspective, but not so much this year from the Seahawks. Unless they get a valuable asset or two back for Butler (or include him in a trade, but he's smaller than the Seahawks like), the Patriots' lack of a 1st and 2nd round pick makes a trade highly unlikely this year. Oh, and if you're looking for a darkhorse, don't count out the Miami Dolphins.

Atlanta Falcons
Dan Quinn is the current Falcons head coach and he knows Sherman from their time together in Seattle. The Falcons aren't in dire need of a corner, but getting Sherman for a first and a conditional pick might be worth it. Sherman would be a fantastic fit and a Sherman - Desmond Trufant pairing would be one of the best in the NFL. Atlanta would need to give up their first rounder this year and likely a 3rd or 4th round conditional pick next year.

Dallas Cowboys
The Cowboys don't fit the cap space requirements yet, but they could be restructuring the deals of Dez Bryant and Jason Witten. That would get them to just under $14 million, before the Tony Romo cap savings hit on June 2nd. Some will have you believe the Cowboys could get Sherman for a 2nd and 5th this year, plus a 2018 3rd. I don't think the Seahawks would accept that deal and believe the Cowboys would have to include their first rounder this year. A bit of a scheme change for the secondary might be needed, but after so many losses in free agency, it might be worth it to add Sherman.

New Orleans Saints
The Saints have been linked to CB Malcolm Butler, so why not send out the No. 32 overall pick and a conditional 2018 pick to the Seahawks for Sherman? The Saints have Delvin Breaux, but the rest of the depth chart at corner is shaky at best. The Saints have just enough cap space to make this happen and adding Sherman would be a massive boost to a secondary that badly needs it.

Oakland Raiders
This might be the most likely option, even if Sherman trade itself is a massive long shot. The Raiders can ship off their No. 24 overall pick to the Seahawks with a conditional pick attached in exchange for Sherman AND Marshawn Lynch. The Lynch to the Raiders deal sounds like it will happen and this makes things a bit less complicated. The Raiders get another stud corner, one who the team should adapt their scheme to. Plus, getting up to No. 24 puts the Seahawks ahead of the Texans. That might allow them to snag one of the top three OTs before the Texans can and allow them to use their original first on a new corner. Wanna learn more? Download the Chat Sports app for iPhone and Android to follow this story.

UP NEXT: 2017 NFL Mock Draft
3 other MAJOR NFL trades that could happen this month

Pittsburgh Steelers
The Steelers have the cap space and getting a player like Sherman would be a huge upgrade to their secondary. As with the other teams on the list, the Steelers could give up a first and a conditional pick. A slight scheme change might be needed, but it's worth it to add Sherman. Having Artie Burns, William Gay and Sherman is a quality Top 3 corner situation for Pittsburgh and might be what they need to get past the Patriots in the AFC.