5 Teams That Could Trade For Saints CB Delvin Breaux 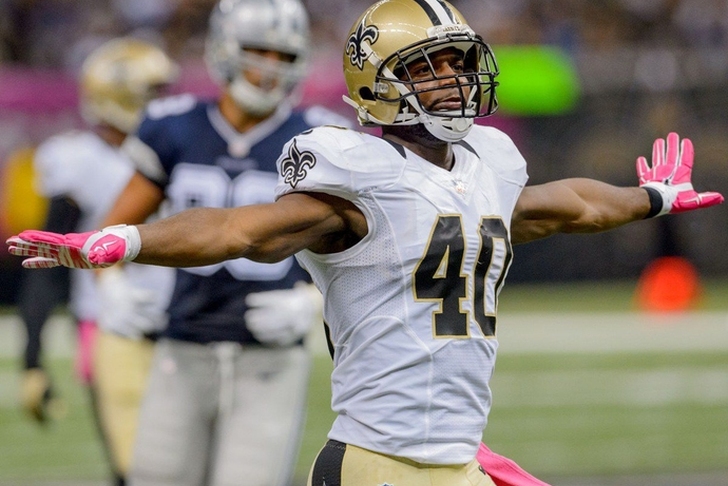 The New Orleans Saints are trying to trade CB Delvin Breaux. It's a bit of a surprise, since Breaux has been the team's top option at corner over the last two years, won't turn 28 until October and will only be a restricted free agent after this season. But the Saints, despite having a poor defense, are tired of dealing with Breaux's injury issues. He missed much of last season with a broken fibula and a shoulder sprain and is now battling a leg bruise that's cost him a week of training camp. So, the Saints are shopping him around.

There are two potential hurdles for any Breaux trade. The first, as mentioned above, is health. If teams are worried about him staying healthy, they won't have much interest. That the Saints are trying to trade him because of the injuries is not a promising sign. The other is the Saints' asking price. It's unclear what the Saints want for Breaux and if their demands are too high, they won't complete a trade. There aren't many trades involving corners in recent years and those that have happened either involve lesser players or feature other players involved (like the two Bills trades last week). That makes it a bit tricky to determine value. A mid-rounder might be the general starting point and it's worth pointing out that Brandon Boykin was traded for a fifth round pick in 2015 (before injuries started to ruin him). The Saints are not getting a Darrelle Revis-type haul. So for all teams mentioned below, it's assumed that the two sides can agree to terms and that Breaux is healthy. It's more about the fit. And yes, there are a lot more teams that could swing a trade for Breaux. With all that in mind, here are five teams that could trade for Saints CB Delvin Breaux.

Arizona Cardinals
The Cardinals have one of the best CBs in the NFL in Patrick Peterson, but they lack a reliable No. 2 across from him. Arizona is in line to start Justin Bethel, Brandon Williams (a 2016 3rd rounder who switched from RB is senior year) or maybe older veteran Tramon Williams. But none of those three are the caliber of player that Breaux is when healthy. Money is a bit tight in Arizona, but Breaux is cheap for the time being. Breaux, assuming he's healthy, would provide an upgrade at CB for Arizona.

Buffalo Bills
The Bills traded away Ronald Darby Friday, getting back a vastly inferior CB in E.J. Gaines. So even with first rounder Tre'Davious White in the fold, the Bills need CB help. Breaux can provide that, if the Bills think he can be effective in their defensive scheme, something they didn't feel confident about with Darby. It's an upgrade, but the Bills' recent string of moves indicate they're rebuilding. They'll claim otherwise, but they might not want to deal a draft pick away for a corner. Still, the need is there and the new regime has shown zero fear in making moves.

New England Patriots
This one features a far more complicated trade. The Saints want Malcolm Butler and considering making a move for him in the offseason. So if the Patriots are prepared to lose Butler this coming offseason, would they trade him early, just like they did with Jaime Collins? The Saints would land Butler in exchange for Breaux, but the Saints are still going to have to send some type of pick to New England. It's a downgrade at CB, but the Patriots would, in theory, get a corner and a pick in exchange for a player they could very well lose in free agency and thus only end up with a compensatory pick.

San Francisco 49ers
At 6-foot-1, Breaux has the size to fit the Seahawks-style defensive scheme the 49ers are running. The Niners do have some options at CB. There's Rashard Robinson (in line to be the No. 1), third rounder Ahkello Witherspoon, recent mid-round picks in Dontae Johnson and Keith Reaser and nickel options in Will Redmond and K'Waun Williams. Breaux would instantly be at least the No. 2 CB in San Francisco, providing an upgrade. But the team is high on Witherspoon and they are rebuilding. While adding more talent is needed, the Niners might not want to give up the draft pick required.

Seattle Seahawks
Seattle is very much a hybrid of the Cardinals and 49ers. Seattle and San Francisco run a similar scheme, while the Seahawks' need matches up with Arizona. Richard Sherman still the No. 1 (despite Seattle openly admitting they were open to trading him), but the rest of the depth chart has question marks. Deshawn Shead is still recovering from a knee injury and Jeremy Lane did not play well last year. Seattle did draft Shaquill Griffin in round three, but the rest of the options (DeAndre Elliott, Perrish Cox, Demetrius McCray, Neiko Thorpe, etc) are not getting the job done. Adding a player like Breaux makes the Seahawks secondary a true legion of boom.