5 Teams That Could Trade For Browns WR Josh Gordon 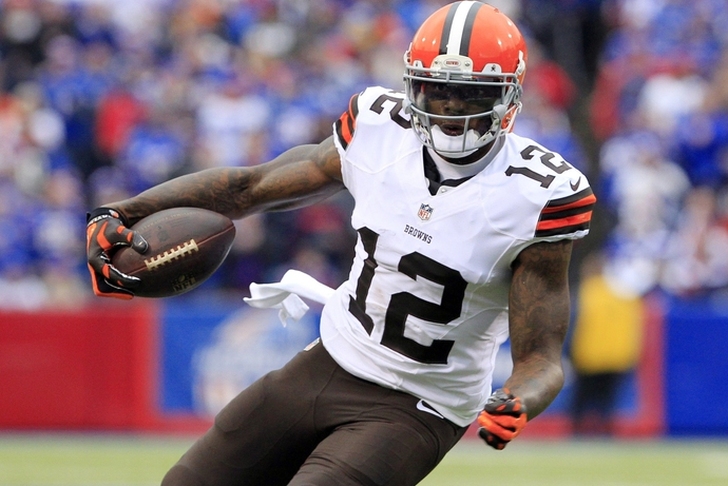 Cleveland Browns wide receiver Josh Gordon will return to the NFL this season after missing all of last year due to a suspension for violating the league's substance abuse policy. Even though he is also suspended for the first four games of this season, the Browns have received trade offers from multiple teams, trying to grab him from the rebuilding Browns. Cleveland has said they plan to hold onto him, but many think they will part ways with him for the right price. Here are five teams that are the most likely to trade for Gordon:

5) Carolina Panthers
Kelvin Benjamin is a young star and Greg Olsen is one of the league's best tight ends, but outside of those two, the Panthers don't have many reliable weapons. They're counting on second-year man Devin Funchess to step up and plan an increased role in the slot, something he may not be ready for. Carolina is also started Ted Ginn on the outside, and he drops way too many passes to be considered a reliable option. The addition of Gordon could make this unit virtually unstoppable, but after dealing with Greg Hardy, it's unlikely the Panthers will give up top draft picks for a guy with this many off-field concerns.

4) San Francisco 49ers
The 49ers probably have the worst wide receiving core in the entire NFL. Torrey Smith has proven to be a nice player, but he has also proven he is definitely not a true No. 1 guy. Gordon would step in and fill that role, giving Colin Kaepernick and Blaine Gabbert a legitimate weapon to work with. However, with the 49ers also in rebuilding mode, I can't see them giving up high draft picks to land him.

3) Kansas City Chiefs
The Chiefs have Jeremy Maclin and Travis Kelce on the roster, but need more weapons in the passing game. Gordon would come in and immediately be their No. 1 option, giving them more opportunities to take advantage of Maclin's versatility. Plus, Gordon would really stretch the field, opening the box for the running back. With Kansas City in win-now mode, they may be tempted to meet Cleveland's asking price.

2) Los Angeles Rams
Head coach Jeff Fisher has made it clear the Rams plan on competing sooner rather than later (as shown by them trading up to draft Jared Goff), and if they plan to do so, upgrading their receiver core is a must. Tavon Austin is the only real threat, and he works better as a slot receiver than an outside threat. Enter Gordon, who would make the Rams offensive a well-rounded threat - and probably give them the firepower to make the playoffs.

1) New England Patriots
The Patriots have already been extremely active on the trade market, sending center Bryan Stork to the Washington Redskins yesterday only to acquire pass rusher Barkevious Mingo from the Cleveland Browns today, so they may be willing to make another blockbuster deal. Julian Edelman and Danny Amendola played well last season, but both battled injuries. Neither is a true boundary weapon, and they don't have a reliable receiver on the outside. Gordon could step right in and immediately be Tom Brady's go-to threat on the outside, adding yet another weapon to New England's explosive offense - which would make them Super Bowl favorites.