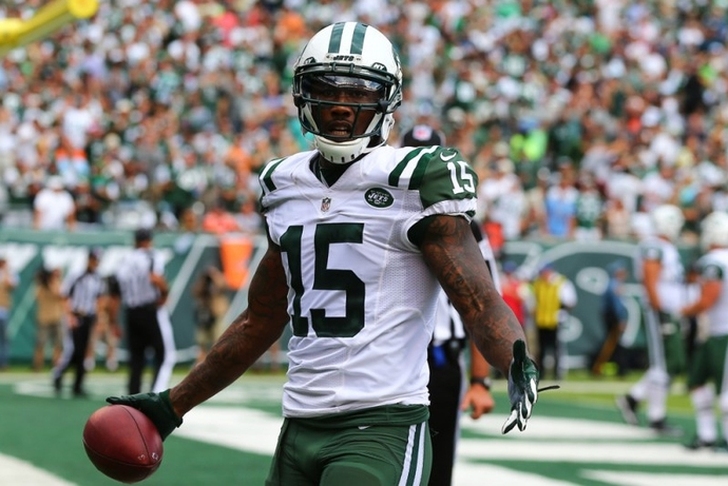 Brandon Marshall's time with the New York Jets is over. Marshall has requested his release, which the Jets have granted. That makes the 32-year-old wide receiver one of the more intriguing options on the free agent market. But the question is, which team will sign Marshall?

Despite coming off a rough season (the QB play was pretty terrible), Marshall can still play at a high level. Even if he's no longer an ideal No. 1 option, several teams will want his services. Given that Marshall asked for his release, I think it's fair to assume he's chasing a Super Bowl ring. That means no San Francisco 49ers on this list. With that in mind, here are five teams that could sign WR Brandon Marshall.

5. Philadelphia Eagles
Every free agent is going to be linked with the Eagles, as they should be. The need for actual weapons for Carson Wentz is that bad. Marshall would easily be the best WR on the Eagles' roster and Philadelphia isn't that far of a move from New York (compared to others on the list). One potential issue is that the Eagles only have about $10 million in cap space. They can clear more, but ultimately, I expect Marshall to join a team that can win a Super Bowl. The Eagles don't fit that bill as well as others.

4. Carolina Panthers
There's a common theme on this list: teams close to the playoffs that need a wide out. That's the Panthers, who are a year removed from a Super Bowl appearance and in need of more WR help for Cam Newton. Marshall should fit well with Cam Newton and should help the younger wide outs (Devin Funchess, Kelvin Benjamin) grow. But cap space is a minor issue for the Panthers compared to the rest ($37 million with several key free agents to bring back). It's a possibility, but Marshall might look elsewhere.

3. Tampa Bay Buccaneers
Mike Evans is one weapon at WR. With Vincent Jackson likely gone, the Bucs surely would like to add Marshall to that WR corps. They're close to contending and pairing Evans and Marshall sounds awesome. With nearly $70 million in cap space, money shouldn't be an issue. This is a real possibility, but maybe the Bucs would prefer someone younger/Marshall wants a better team.

2. Tennessee Titans
The Titans are really a better AFC version of the Eagles in this scenario. They badly need a legit WR, although a younger one might be their preferred option. Still, the Titans nearly made the playoffs last year and fit Marshall's assumed playoff-caliber team. Plus, the Titans are flush with $64 million in cap space But, there is one option that looks a little bit better.

1. New England Patriots
The Patriots almost always pop up on these landing spot lists. Having nearly $60 million in cap space and coming off yet another Super Bowl win tends to help that. While those rarely end up happening, Marshall and the Patriots actually makes a ton of sense. The Patriots do need another bigger WR and Marshall would be deadly with Tom Brady. Marshall even called the idea of joining the Patriots is "intriguing" in December. If Marshall is indeed chasing a ring, which would explain why he requested his release, the Patriots are the logical landing spot.