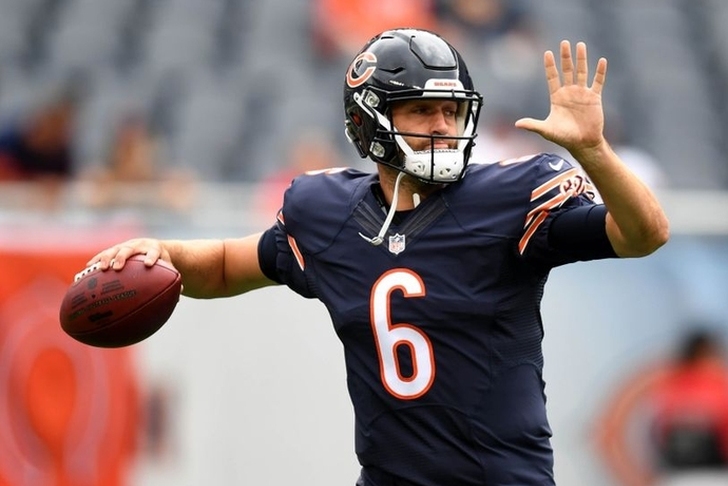 Now that Tony Romo has elected to retire and join CBS, the free agent market for former Chicago Bears QB Jay Cutler should start to form. Cutler has his flaws (mostly around his attitude and turnovers), but he'd be an upgrade over several QBs in line to start this year and is the top free agent left in the NFL. Cutler shouldn't be overly expensive and if he plays up to the level we've seen in the past, he'd be a quality pickup.

Cutler isn't a long-term franchise option, especially since he'll turn 34 this year. He wants to start, so we're eliminating teams (like the Miami Dolphins and Cutler's ties to Adam Gase) looking for backups as options. The New York Jets were a perfect landing spot, before they signed Josh McCown instead. With that in mind, here are five teams that could try to sign Jay Cutler.

5. Denver Broncos
Full disclosure: several of the teams listed are long shots at best. I think the Broncos will go into the season with Trevor Siemian and Paxton Lynch battling for the starting job. But if Cutler remains unsigned, John Elway would at least consider it. It's unlikely, but it could be an option.

4. Jacksonville Jaguars
I expect the Jags to give Blake Bortles another shot this year and if he fails, move on to a new QB via the draft next year. But, bringing on Cutler does make some sense. It'd provide Bortles with the best competition he's had and, frankly, Cutler is a better QB right now. Heck, in a down AFC South, the addition of Cutler would push the Jags closer to a playoff berth.

3. Cleveland Browns
Is Cutler better than Cody Kessler and Brock Osweiler? Without a doubt. But that doesn't mean the Browns will add him. Cutler doesn't fill the franchise QB need, so I suspect they'll instead elect to focus on the draft for a franchise option at the position.

2. Sit And Wait For An Injury
I know, this isn't actually a team and I'm cheating. But if Cutler isn't offered a starting job right away, it might be in his best interest to wait for something to happen. No one ever wants injuries to happen, but they are a part of the NFL. So perhaps Cutler passes on offers and remains a free agent until someone goes down. Then, he can step in as a starter for a team that's making a playoff push.

1. Houston Texans
With Romo out of the picture, Cutler is the best backup plan for the Texans. Tom Savage is not the answer and Cutler gives them a better chance of making the Super Bowl. I'm not saying they'll win, but the Texans wouldn't be far away if Cutler could play well. I mean, they made the playoffs with Osweiler last year and Cutler is without a doubt a better QB. However, it's unclear if the Texans have any interest in Cutler.