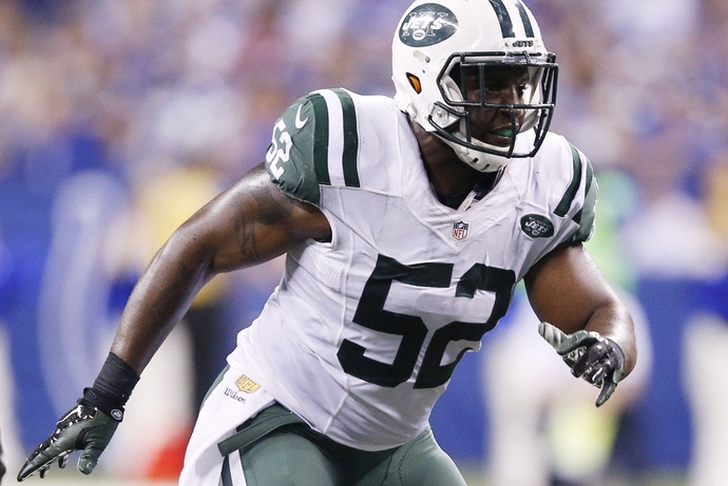 The New York Jets embraced a youth movement Tuesday, cutting LB David Harris. The move saves the Jets $6.5 million in cap space, but it cost them a veteran starting linebacker. Now, a different NFL team will be able to benefit from the Jets' roster move. Despite his age, Harris will draw plenty of interest and it shouldn't take too long for him to find a landing spot.

Harris' agents were not happy with the timing of the release and it's tough to blame them. Harris is looking for a new team after many have filled their linebacking needs with other free agents or draft picks. Still, Harris will be able to find a new team. He's not the same player he once was, but he's still able to contribute to an NFL team. While more than just five teams will likely have interest, we've narrowed down the list a bit. With that in mind, here are seven teams that could sign LB David Harris after the Jets cut him.

5. New York Giants
The Giants have needed linebacker help for years. But, it's a position the team doesn't value at all, so they don't spend high picks or spend much money on the post. Perhaps the release of Harris can get the Giants to make a move. The did have interest in Gerald Hodges and Harris could be a similar pickup. Harris would be an upgrade at MLB and he would provide some veteran leadership as well. The Giants would be wise to convince Harris to pull a Brandon Marshall, but their general lack of interest in LBs keeps them lower despite the need.

4. Pittsburgh Steelers
The Steelers didn't replace Lawrence Timmons this offseason, which surprised me. It likely leaves Vince Williams as the starter next to Ryan Shazier. That might not be the best plan, but the Steelers can fix that by adding Harris. He's a strong fit in the Steelers' 3-4 scheme and could provide the veteran presence the Steelers lost with Timmons. But much like the Giants, it's unclear if the Steelers want to add another linebacker right now.

3. Detroit Lions
The Lions have first rounder Jarrad Davis at MLB, but they could still add Davis. At the very least, he'll provided some need competition for Tahir Whitehead. He struggled badly last year and the Lions need someone to at least push him. Harris might not be as good a fit in Detroit as some of the other teams, but there's a need he can help fill.

2. Oakland Raiders
The Raiders badly need LB help. They lost Malcolm Smith to the 49ers, replacing him with the injury-prone, but cheap, Jelani Jenkins. But that weakside linebacker spot is at least filled compared to the middle linebacker hole. Perry Riley remains unsigned, with the Raiders currently letting Ben Heeney, Cory James and Marquel Lee compete for the starting role. That's a terrible idea and if the Raiders don't plan on re-signing Riley, Harris is a solid replacement. He's a vet for the middle of the Raiders defense and a big upgrade.

1. New England Patriots
If Harris really wants to stick it to the Jets after getting cut (or just wants to win), there's no better spot. D'Onta Hightower is locked in at one of the spots, but the other could use an upgrade. Right now, the Pats are fine of depth with players like Elandon Roberts, Shea McClellin and Kyle Van Noy, but getting a player like Harris would be a boost. If Harris isn't worried about money at all, he could sign cheap with the Patriots and try to win a Super Bowl.