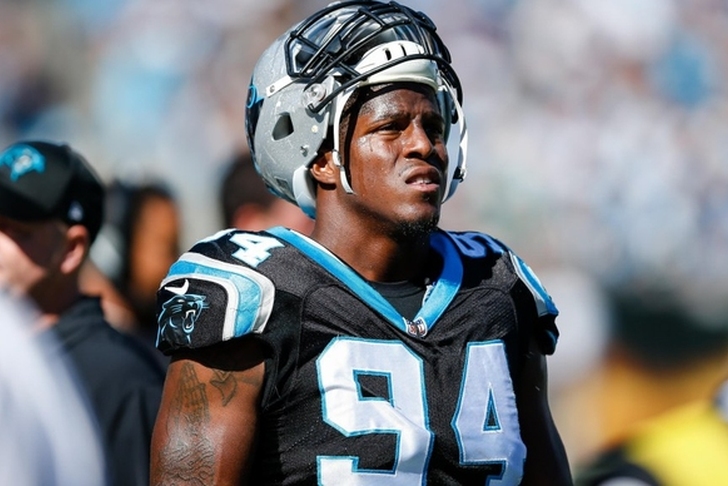 The New England Patriots made a surprising move Saturday, cutting DE Kony Ealy. The Patriots traded a second round pick to the Carolina Panthers for Ealy and a third rounder, hoping he could help boost a pass rush that needed help. That clearly wasn't the case and after the Patriots tried trading Ealy with no success, they elected to cut him. Even though it didn't work out in New England, Ealy will get another chance in the NFL.

Ealy is just 25 years old and had a monster Super Bowl 50, with three sacks and an interception. But consistently playing like that has been a problem for Ealy. He's had five sacks in back-to-back years, but that's not what the Panthers wanted. Super Bowl 50 was supposed to be Ealy's coming out party and so was a trade to New England. Perhaps the third time is the charm for Ealy. Don't be surprised if Ealy is claimed by one of the teams below instead of clearing waivers and signing: he's due less than $1 million this year. He's a fit in a 4-3 scheme, so expect teams that run that defense to have the most interest. With that in mind, here are five teams that could sign DE Kony Ealy after the Patriots cut him.

Buffalo Bills
There's a connection here, as Bills head coach Sean McDermott and GM Brandon Beane were in Carolina when the Panthers drafted Ealy. McDermott was the defensive coordinator in Carolina, so if he thinks he can get the most out of Ealy, expect the Bills to have interest. The Bills aren't as desperate as other teams on this list, but it's not like they're loaded at DE either. Shaq Lawson and Jerry Hughes is a solid starting tandem, but the top backup is ... Ryan Davis? The Bills are thin at DE and Ealy would be a good third DE on the roster. The familiarity between the two sides helps the Bills' chances if they have interest.

Dallas Cowboys
The Cowboys' pass rush wasn't great last year and it still needs help. Yes, the Cowboys added Taco Charlton in the draft, signed Damontre Moore and have 2016 fourth round pick Charles Tapper coming back from an injury that cost him his rookie year. Meanwhile, DeMarcus Lawrence didn't play well last year amid injuries and a suspension, while Benson Mayowa actually led the team with six sacks last year. David Irving, who had flashes last year, is suspended the first four games, Randy Gregory might never play again and even Moore is suspended for two games. All of that is to say the Cowboys need more help at DE, especially with a revamped secondary. Ealy has the type of upside to be that player and he would fit in the Cowboys 4-3 scheme. Sure, he won't cure Dallas' pass rush problems, but he could give them another rotation option.

Detroit Lions
The Lions have been hit hard by injuries at DE. Ziggy Ansah, the former first rounder who struggled last year amid injuries, is still on the PUP list. Projected starter Kerry Hyder is out for the year. Devin Taylor joined the Giants and although the Lions signed Cornelius Washington, he has just three career sacks in 31 games. Armonty Bryant had three sacks last year, but is suspended for the first four games. Anthony Zettel, a 2016 6th rounder with one career sack, might have to start. Perhaps more so than any team on this list, the Lions need pass rush help. Ealy would have the most sacks on any player from last year on the roster.

New Orleans Saints
The Saints were in desperate need of pass rushing help this offseason. Cam Jordan had 7.5 sacks last year, but no other defensive end had more than 1.5. Heck the second and third players (DT Nick Fairley and LB Dannell Ellerbe) aren't coming back this year. They have a veteran in Daryl Tapp and drafted two players in Trey Hendrickson and Al-Quadin Muhammad. It'd be great if former second rounder Hau’oli Kikaha can beat out Alex Okafor for the starting gig across from Jordan, but there are massive questions marks on the defensive line. Getting a player like Ealy would at least give the Saints more options. Even if he just gives another five-sack season, that would have ranked third on the Saints last year.

Oakland Raiders
Ealy would not be a 4-3 DE / 3-4 OLB with the Raiders like the Patriots were trying to make him. Instead, he'd be a 4-3 DE who could get some work as a 3-4 DE when the Raiders use 3-4 looks. I don't know how great of a fit Ealy would be in a 3-4, but he does fit as a 4-3 guy. And the Raiders simply need more pass rush help for Khalil Mack and Bruce Irvin. The return of Mario Edwards and the addition of Eddie Vanderdoes should help, but there's no such thing as too much pass rushing. It's a move worth making for a team that was dead last in the NFL in sacks last year, despite having Mack.