The 5 Best Offensive Line Units In The NFL In 2015 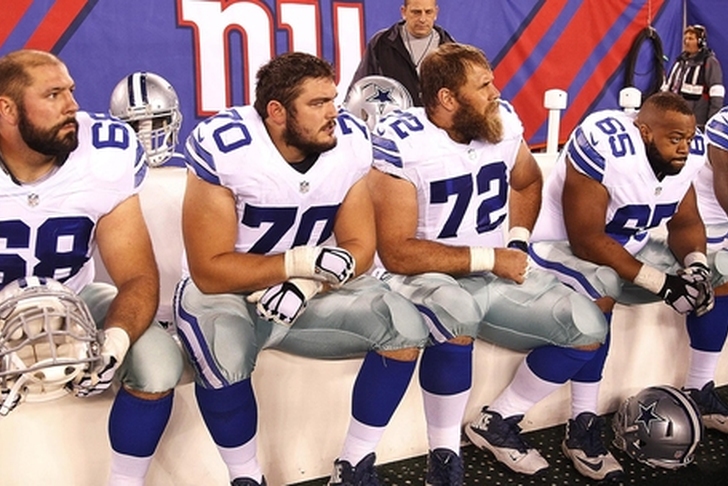 The Eagles would have been a no-brainer before they cut Evan Mathis. They've still got Jason Peters and Lane Johnson at tackle, plus Jason Kelce at center. All three are among the best at their positions. However, the guard position is a big question mark. Even the Eagles get league average play at those positions; they should still be among the top five units in the NFL. The Pittsburgh Steelers were going to have this spot before Maurkice Pouncey was injured.

Andrew Whitworth is one the best tackles in the NFL. He's also played some guard and grades out among the best at that position as well. Andre Smith is a great run blocker too. Guards Clint Boling and Kevin Zeitler grade out well on Pro Football Focus (subscription required). However, the two guards have looked a bit shaky in the preseason. Center Russell Bodine has struggled, but the rest of the line covers for him. Reinforcements are on the way too, as the Bengals spent their first two draft picks on offensive tackles.

This line gets a big boost from Aaron Rodgers' abilities to get the ball out quickly, but it's still a great unit. T.J. Lang and Josh Sitton are the best guard duo in the NFL. Center Corey Linsley played well, as did right tackle Bryan Bulaga. Left tackle David Bakhtiari is the "weak link," but even he is above average. He does need to improve his run blocking.

Marshall Yanda is the best guard in the NFL and Kelechi Osemele isn't far behind him. Center Jeremy Zuttah is above average and right tackle Ricky Wagner is great in pass protection. Left tackle Eugene Monroe needs to improve, but the Ravens are expecting big things from him.

The Cowboys have invested more into their offensive line than any other team and it shows. Left tackle Tyron Smith, guard Zack Martin and center Travis Frederick were all first round picks and are among the best at their positions. Doug Free had a bounce back season and looks like one of the league's better right tackles again. Ronald Leary was solid at guard and he might lose his job this season to La'El Collins. Collins would have been a first round pick had he not been a person of interest in a murder case right before the draft. Collins ended up having nothing to do with the murder, but it scared teams off during the draft. The offensive line is loaded.