The 5 Best and 5 Worst Offensive Lines In The NFL 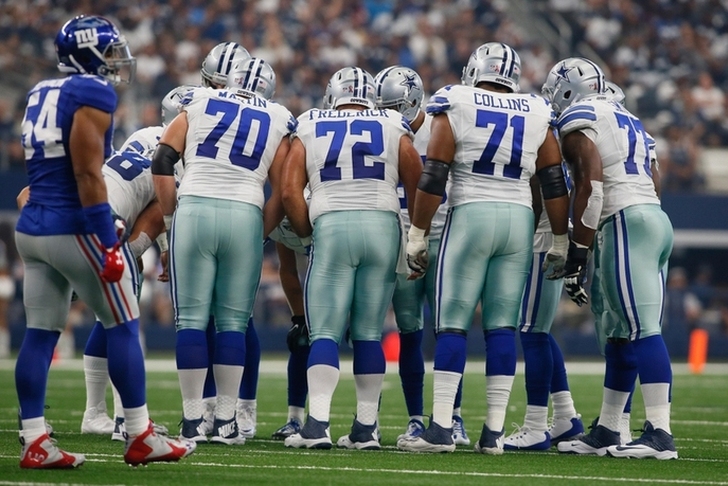 For all the buzz and praise skill position players get in the NFL, a team's success is usually determined by how good (or how bad) their offensive line is. So, which units are the best? Here are the five best - and five worst - offensive lines in the league, according to Pro Football Focus:

TOP FIVE
5) Dallas Cowboys
Weird to see the offensive line generally accepted as the best in football to only be No. 5 on the list, right? Well, PFF marked them down for injuries to Tyron Smith and La'el Collins. When this unit is at full strength, though, they're as good as anyone - just ask Ezekiel Elliott.

4) Washington Redskins
This unit has been a surprise for the Redskins to this point in the season, but they've had a major role in Washington's current three-game winning streak. Trent Williams has continued to be one of the best left tackles in the game and Brandon Schreff has looked like a first-round pick.

3) New York Giants
The Giants? Yes, the Giants. While Ereck Flowers has been inconsistent, Justin Pugh is playing at an All-Pro level at guard and Weston Richburg is one of the best pass-blocking centers in the league. It helps that Eli Manning usually gets rid of the ball quickly, but there's no doubt this group is much improved.

2) Green Bay Packers
According to PFF, the Packers allowed just 17 quarterback pressures through the first four games of the season. They're strong at all five positions and are the reason why Aaron Rodgers can hold onto the ball for as long as he does. This group can be a bit inconsistent in their run-blocking, but they're still one of the league's better units.

1) Tennessee Titans
Tennessee is trying to rebuild their franchise, and they've invested a lot into the offensive line to be one of the centerpieces of that process. Veteran Taylor Lewan and rookie Jack Conklin both rank in the top 5 at the position according to PFF, and the interior of their line has been good as well. They've kept Marcus Mariota clean and are opening up huge holes for DeMarco Murray and Derrick Henry.

WORST FIVE
28) San Francisco 49ers
San Francisco is perhaps the worst team in the league, and their lackluster offensive line is a big reason why. Joe Staley is still excellent at the left tackle spot, but the rest of the unit, well, leaves more than a little something to be desired. 2.9 yards per carry (in Chip Kelly's wide open offense, so less) is a big indicator of how bad they've been.

29) Houston Texans
Brock Osweiler and Lamar Miller haven't lived up to their billing after signing big contracts as free agents this offseason, yet a majority of their struggles can be blamed on bad line play in front of them. PFF says RT Derek Newton is the only starter that grades well as a run blocker, and the unit as a whole has had major troubles in pass protection.

30) Minnesota Vikings
Wonder why this team ranks dead last in the league in rushing? It's not because they've played three games without Adrian Peterson (those have actually been improvements over the first two games) - it's because their offensive line has struggled. Starting LT Matt Kalil is out with an injury, and his replacement, T.J. Clemmings, hasn't been great.

31) Los Angeles Rams
Fantasy owners, don't blame Todd Gurley for his bad season - blame his dreadful offensive line. It all starts with starting left tackle Greg Robinson, who PFF ranks as the 75th best OT in the league after giving up 14 pressures through four games. Expect this group to keep LA from making the playoffs this year.

32) Seattle Seahawks
Seattle's method of drafting athletes, regardless of position, and turning them into offensive lineman just isn't working. We thought they would struggle coming into the year, and they've been just as bad as expected. PFF breaks it down:

Seattle will be hoping the return of rookie Germain Ifedi can improve matters, but in 60 snaps so far, he hasn’t suggested he will be much of an upgrade. Justin Britt has been a relative bright spot at center, with a very strong game against the Jets after three more average performances, but the rest of the starters have been poor. Bradley Sowell and J’Marcus Webb, in particular, have just reinforced why they were given up on as starting propositions by previous teams, while Garry Gilliam at RT has been struggling, especially against the Rams.

No wonder Russell Wilson seems to be dealing with a new injury every week.